‘This is the U.S.A’ – American Propaganda in Post-WWII Bahrain 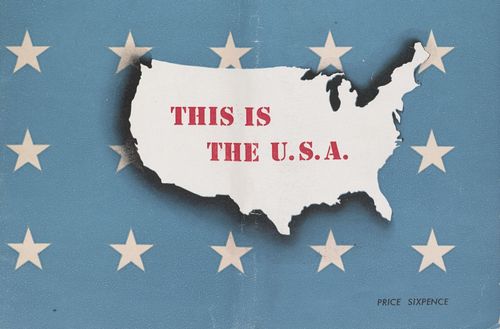 In June 1942, 'in recognition of the right of the American people and of all other peoples opposing the Axis aggressors to be truthfully informed about the common war effort', President Franklin D. Roosevelt issued Executive Order 9182 and established the United States Government’s Office of War Information (OWI). Its job was to produce and disseminate wartime propaganda, both within the United States of America and abroad. The activities of the OWI were diverse and encompassed the production and distribution of radio broadcasts, films and posters as well as written publications including magazines, newspapers and leaflets. Internally, the OWI was focused on promoting patriotic sentiment, encouraging the recruitment of women into the workforce, warning of the dangers of foreign spies and justifying controversial government decisions related to the war (the mass internment of Japanese-Americans for instance). Externally, the OWI mass produced – and distributed – printed material that was intended to raise awareness of the United States as a global power and project an image of the country as a modern, democratic and powerful state that was fighting for the cause of liberty and freedom around the world. The OWI was disbanded in September 1945 but documents contained within the India Office Records (IOR) held at the British Library show that material it produced continued to be used in United States propaganda efforts after this date.

In January 1946, a number of pamphlets produced by the OWI were sent via post to Shaikh Khalifa bin Mohammed Al Khalifa, the Chief of the Bahrain Police Force. At this time, the United States government wanted to establish a consulate in Bahrain and since 1942 had repeatedly asked for Britain’s permission to do so. The British, unwilling to allow any other foreign countries – even close allies – access to Bahrain, had refused the United States’s requests. The ruler of Bahrain, Shaikh Salman bin Hamad Al Khalifa was also opposed to the idea, explaining to Arnold Crawshaw Galloway, Britain’s Political Agent in Bahrain, that “although the USA was a great and powerful ally, he did not desire that our [Britain’s] influence in the country should be shared with anyone”. The fact that Shaikh Khalifa’s response after receiving the OWI materials was to forward them to Galloway demonstrates the depth of Britain’s control over Bahrain during this period.

When Galloway reported the incident to Charles Geoffrey Prior, the British Political Resident in the Persian Gulf (the most senior British official in the region), he made it clear that he believed that the United States had not only targeted Shaikh Khalifa, speculating that 'in all probability similar packets have been addressed to the leading sheikhs of Bahrain and possibly also to merchants'. Galloway argued that it was likely that Parker T. Hart, the United States Consul in Dhahran, Saudi Arabia was involved in sending the packets and that the American oil company ARAMCO was probably responsible for delivering them. Prior responded to Galloway saying 'I think the only thing we can do at present is to show Hart that his efforts do not pass unnoticed, and that they are viewed without enthusiasm'. Prior had already made his attitude towards Hart clear in a letter in November 1944 in which he stated that 'we [Britain] are extremely fortunate in that Mr. Hart has no knowledge of the Arab world… so long as the United States are content to employ officers with these qualifications, the danger to our interests is minimised. When, however, they are able to post officers with experience of the Middle East and a fluent knowledge of Arabic the position will become entirely different'.

Although the USA's profile on the world stage grew dramatically as World War II progressed, during this period, the United States was not the globally recognized super-power and symbol of modernity par excellence that it later became. This was especially true in the Middle East, where the major European powers were more widely known than the United States. Therefore, a key aim of the OWI pamphlets sent to Shaikh Khalifa (and others) was simply to raise awareness of the United States in the region, especially amongst those who had been identified as key decision-makers or important in the formation of public opinion. The OWI material sent to Shaikh Khalifa – all of which is preserved in the India Office Records – consists of three pamphlets: one in Arabic entitled Child Care in the United States and two in English; The Story of the United States Government... How It Started... And How It Works and This is the U.S.A. 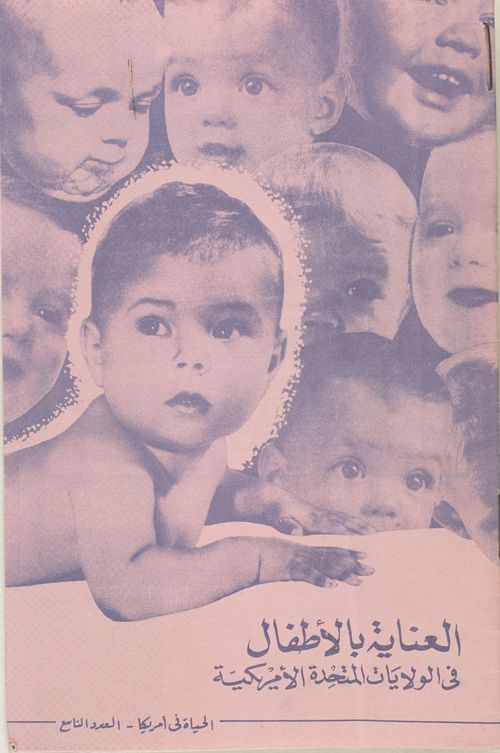 The pamphlet concerning childcare, number nine in a series entitled Life in America, is of particular interest as it is an early example of United States government propaganda produced in Arabic and is clearly targeted at women. The pamphlet, published in Cairo, contains information regarding nutrition, hygiene and health care for young children including instructions on breast feeding and washing. The opening text of the pamphlet declares that ‘America is the land of smiling children and one of the reasons for their happiness is that they’re healthy’. It seeks to project an image of the United States as a modern, clean and scientifically advanced society which is the ideal environment in which to raise children. 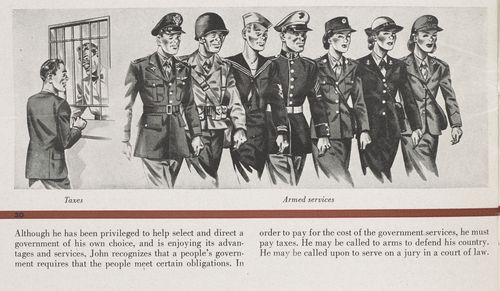 'a people’s government requires certain obligations'. Excerpt from The Story of the United States Government... How It Started... And How It Works (IOR/R/15/1/377 f. 163v)

This is the U.S.A. is a larger pamphlet that is extensively illustrated with photos depicting the various regions of the United States and their inhabitants in a style reminiscent of a travel guide. It stresses the scale and natural beauty of the country as well as the diversity of its population and its abundance of natural resources. On the pamphlet’s final page opposite a dramatic image of the Statue of Liberty at night, the United States is described as 'a land of political, racial and religious freedom' that is currently joined together with 'people of the other United Nations in the great fight to restore liberty and justice to all conquered nations of the world'. 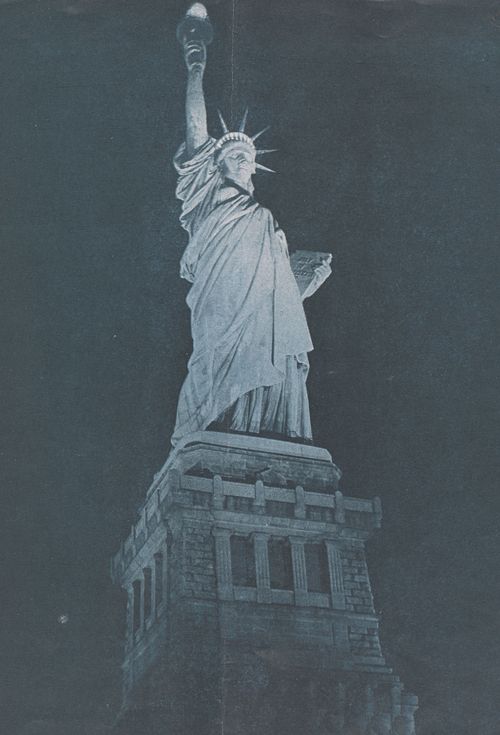 The immediate impact that the distribution of this OWI material in Bahrain had upon the U.S.’s reputation and popularity in the country is not clear from the IOR files. The US and Bahrain are now close strategic allies and the U.S. Navy’s Fifth Fleet is based in Bahrain’s capital, Manama, yet whether or not the origins of this close relationship can be traced back to these early OWI-led propaganda efforts is debatable. No official U.S. diplomatic representation was established in Bahrain until it received independence from Britain in 1971 and evidence from 1951 suggests that several years after the OWI pamphlets were produced the U.S. still had much work to do in raising its profile in the Middle East. In that year, Columbia University carried out a survey regarding ‘Communications and Public Opinion in Jordan’. Responding to a question in the survey that mentioned the United States, it transpired – much to the shock of the researchers – that 15 of the 26 respondents surveyed had ‘literally never heard of the United States, and most of the remainder had only the most naïve notions concerning its nature, distance and peoples’[1].

These OWI pamphlets and the official letters that discuss them offer a fascinating insight into U.S. propaganda activities during the era in which it emerged as a global super-power. They also highlight the growing imperial rivalry that developed between the U.S. and Britain even as the two countries were fighting together as close allies during World War Two. More broadly, the preservation of the pamphlets in the India Office Records serves to demonstrate the richness and surprising diversity of the information contained within these records and illustrates the important role that they can play in facilitating innovative historical research.