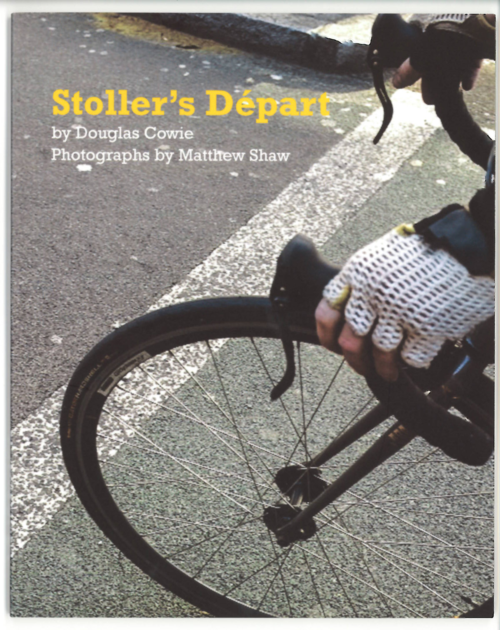 The Grand Départ of the 2014 Tour de France has not escaped the notice of Team Americas.  Next week, you will be able to see the Tour de Lead Graffiti at St Pancras, a colourful set of typographical posters produced to celebrate the 2012 and 2013 editions of the Tour by the American printers, Lead Graffiti (we will post more about this; the exhibition is also listed on our What's On pages). Plus, we've contributed to a display of cycling material, which includes a draft of Tim Moore's French Revolutions: Cycling the Tour de France, at our Boston Spa site.  I have booked the following Monday as annual leave to watch the arrival of the peloton in London.

We are also putting our cleats where our mouths are, and participating in what we realise is a bicycle-based recreation of Dick Turpin's ride to Yorkshire, roughly following the route of the 2014 Tour in reverse and riding from our St Pancras site to Boston Spa in two days. We will be carrying something with us: copies of a specially-commissioned short story by the American author, Douglas Cowie, and which can be seen above. At the end of the ride we will deposit it at Boston Spa to be catalogued after its journey of a little over 200 miles (320 km in proper Tour units). Doug has written a bit about it on his website, here.

The story is based on a real ride from the former British Museum Library to the British Library at St Pancras, taking in John Bunyon and some other possibly familiar places and characters en route. You can pick up a copy for a few pounds along with other cycling-related materials at the BL Shop or online. 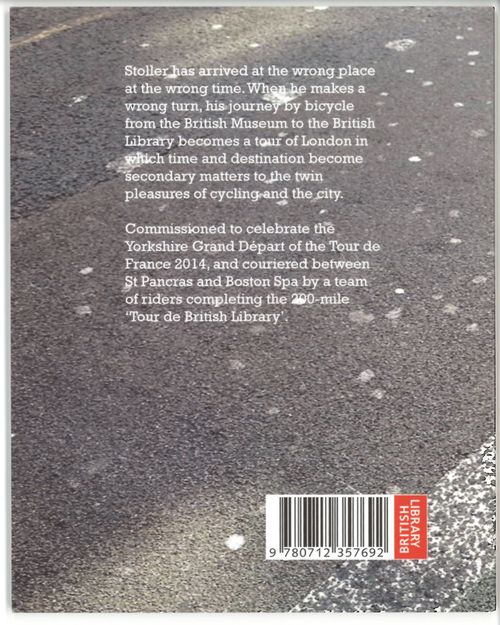 And the title? Well, if you are familiar with the US film, Breaking Away, then the surname of the main character may ring some bells. 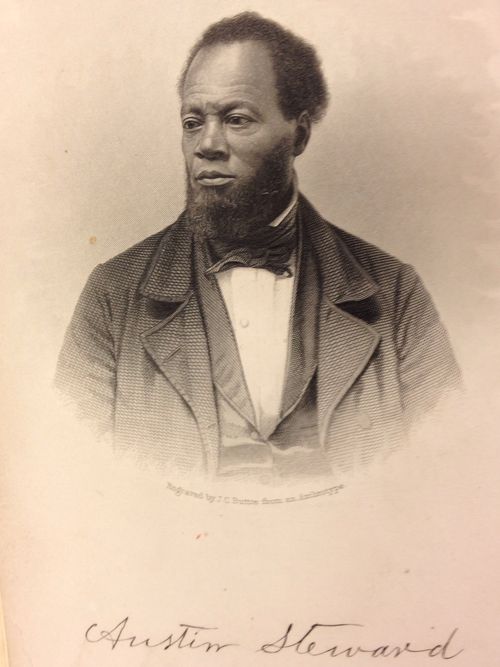 Above: portrait of Austin Steward from, Twenty Two Years a Slave and Forty Years a Freeman (BL shelfmark: 10880.bb.15)

[Ellie Bird, one of Team Americas' CDA PhD students, is off to Nova Scotia this week, to continue her research on the published history of slavery in Canada. Here's an update on her research at the British Library so far]

I am a second year PhD student based at the University of Sheffield doing a collaborative doctoral award with the British Library. This means I get three supervisors—including Phil Hatfield in the Americas and Australasia Studies Team at the BL.

Recently I’ve been looking at issues of Frederick Douglass’s anti-slavery newspaper, which between 1847-1851 was entitled The North Star, in the search for advertisements for two book length slave narratives I’m currently researching for my work on Canadian slave narratives; Benjamin Drew’s A North-Side View of Slavery (1856) (BL shelfmark: 8156.c33) and the second edition of Austin Steward’s Twenty Two Years a Slave and Forty Years a Freeman (1859) (BL shelfmark: 10880.bb.15). I want to know how they were advertised, how much they cost and what I can gage about potential readers. There are gaps in the available holdings which mean I am unable to find what I am looking for; one of the joys of research is that as you work, you meet dead ends and need to look somewhere else. However, as so often happens when I start delving into old newspapers, there are many new and intriguing things that catch my eye. 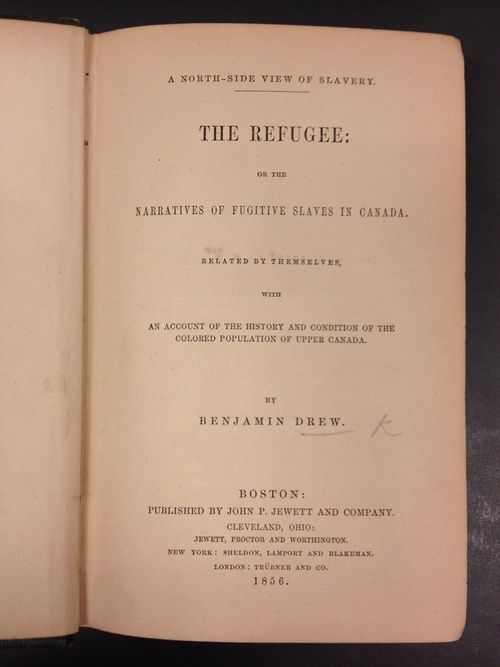 Published once a week in Rochester, New York, evidence from The North Star indicates it was circulated by agents in the American States, as well as in farther flung places including Toronto, and England. Looking through the Library's holdings for 1851 there are many reprinted articles from Canadian newspapers, items about British abolitionist George Thompson and Douglass himself speaking to the Canadian people urging them towards anti-slavery sensibilities. An account of an anti-slavery speech given in Toronto describes slavery in America as a disease threatening to spread throughout Canada if not resisted (The North Star, 17 April pp2- 3).

Canadian women are urged to take action and write letters to their US counterparts spreading anti-slavery arguments (3). The speech urges its Canadian listeners through the use of pro-British sentiment to choose to actively defend freedom and halt the spread of slavery. Here, printed in an American abolitionist paper, it is not simply patting British backs but making a call for American abolitionists to galvanise. It also reflects that Canadian locations such as Toronto mattered in the American anti-slavery movement.

I could look at newspapers like this all day. As well as being, in my eyes, an underexplored but crucial space in which to learn about writing on slavery and slave narratives, it also immerses you within a rich culture where advertisements for horse ointment and ledger books sit alongside anti-slavery poetry, reports of anti-slavery gatherings in Toronto and a small article celebrating a black inventor’s creation of an aid for the fire department in Philadelphia (NS, 5 Oct 1855, p3). In short, slave narratives were not circulated in a cultural vacuum and newspapers reflect this perfectly. 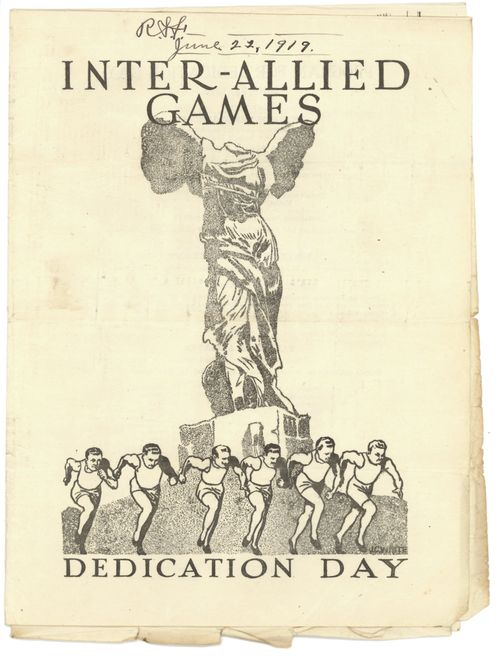 We opened our free Folio Gallery exhibition, Enduring War: grief, grit and humour (19 June-12 October) last week.  The exhibition is international in scope, although naturally enough, its focus is British. That said, we have included a number of Canadian items, as well as West Indian material: Phil has already blogged on Squidge. We had a number of US items lined up (the United States entered the war in 1917, as you know), but the demands of the space and exhibition storyline meant that they were returned to the stacks.  However, we can take advantage of this, and begin an ongoing series of items that didn't make it into the gallery.

The first of which is shown above, a programme for the Inter-Allied sports day that took place in France, 22 June–6 July 1919.  It is a recent acquisition, and we also hold a volume  summarizing the organisation and the results from the games at RG.2014.b.13 (a digitised copy from Cornell is available via the Internet Archive).

The games were an inclusive event, and included tug-of-war to soccer, tennis, basketball, fencing, water polo, boxing and equestrian events, as well as track and field, many of which took place at Pershing Stadium at Vincennes, France.  Constructed by the US military in cooperation with the YMCA, the stadium was gifted by the Americasn people to France after the games. According to the editors of the companion volume, 'the games were played before crowds so immense that the number of spectators could not have been increased except by the use of aeroplanes or observation balloons.'

Indeed, the games were not limited to terra firma, but included an 'Aeroplane Parade' as a grand finale.  The planes flew in formation, west to east over the stadium, dropping parachutes with the flag of each nation participating in the fly past (France, Italy, Belgium and the US).  The five American planes included a captured Fokker, which was due to 'climb to a good altitude and engage in combat with two [US] spads].'

It didn't quite work out like that. The captured Fokker instead fell from the sky and crash landed at the nearby racetrack (with the unhurt captain displaying 'splendid airmanship in his enforced landing'). The crowd tore the plane to pieces for souvenirs.  A handwritten note on the tentative programme reads, 'I saw this plane drop. This is a piece of it. don't lose it or cut it.'

The note was ignored, and the piece is not present (fear not, it wasn't there when we acquired it either).

To make up for this, if you can come to the Folio Gallery before 12 October, you can instead see a fragment of a Zeppelin, picked up in Essex, as well as progammes for other sporting events that took place during the war. 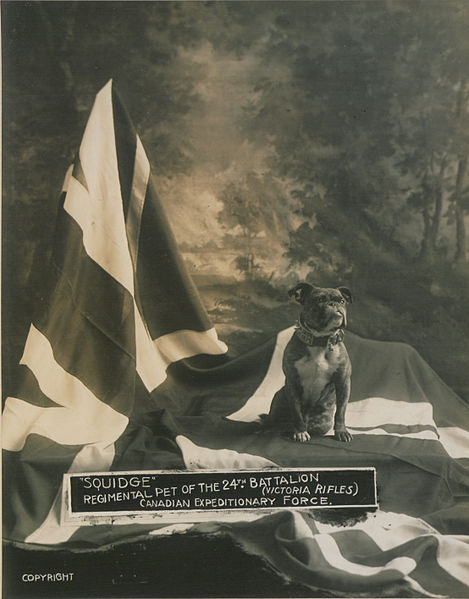 Above: 'Squidge', who manages to look even more magnificent in the exhibition space.

After all the work that has gone into the Library's contribution to Europeana 1914-1918 and preparation for events to commemorate the centenary of the beginning of the First World War, Team Americas are very pleased to see 'Enduring War: Grief, Grit and Humour' open in the Folio Society Gallery today. By focussing on how people coped with the war the exhibition inevitably shows the use of humour as a way of engaging with the conflict, providing a view of the war through soldiers' eyes (and pens).

Our own Dr Shaw was co-curator for the exhibition and he noted during the selection of items just how prolific the use of humour was in soldiers' accounts of the conflict. As Matthew points out, far from being flippant there was something about military service that, 'focussed the mind on a particular sense of humour'. One of the items on display is 'The Waitemata Wobbler' and this contains a number of examples of this sort of humour, one that frequently treats officers as the but of jokes (see below). 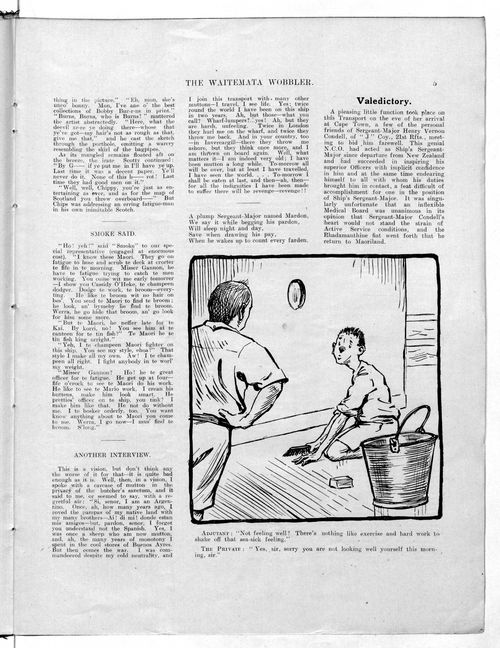 Above: a cartoon from 'The Waitemata Wobbler'.

We were also very pleased that Squidge has made a physical appearance in the exhibition. Since Europeana 1914-1918 and Picturing Canada started he has been something of a favourite around the Library and now he's ready for his public close up. These are just two of the many items on display that show the experiences of troops from across the Americas and Australasia - indeed, Squidge is kept company by a book on the British West Indies Regiment.

Based on this morning's activity Squidge and others will get a lot of viewers and the exhibition is going to be very popular. If you come along remember that you can track down items such as the 'Wobbler' at Europeana 1914-18 and leaf through them once you are home. 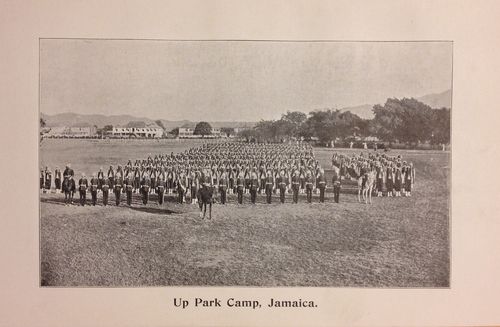 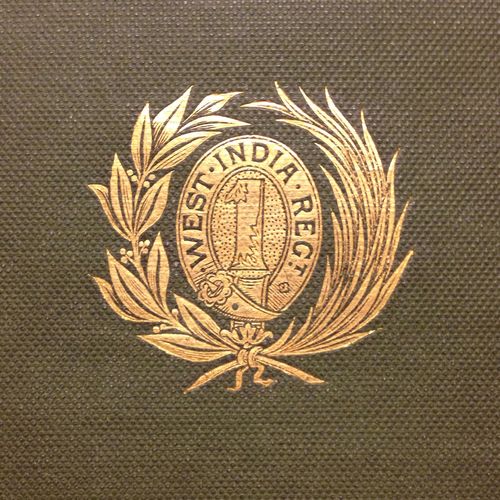 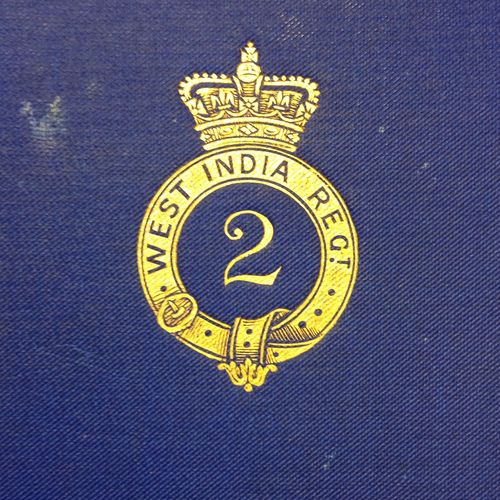