50,000 Moths and Butterflies Died in the Making of this Post 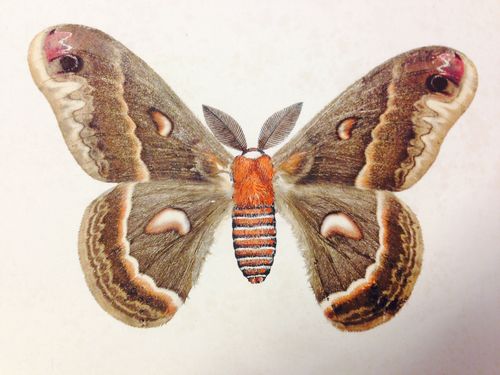 Printing takes many forms. We mostly think of books as something created by moveable type, and then by more automated means, such as linotype or, more recently, digital production. But it can also incorporate the more handmade, corporal, and in the case of this post, lepidopterous.

The volume next to me as I write this post has been in our collections since it was purchased for the British Museum Library in 1900. It is copy number 259 of a limited edition of 500, printed in Boston, Mass., and the two volumes have been bound as one in dark green and black leather. Its title? The relatively unassuming Moths and Butterflies of the United States East of the Rocky Mountains, by Sherman F. Denton (Boston, Bradlee Widden, 1900) [shelfmark K.T.C.27.b.14].

It is a remarkable thing. Denton perfected an existing technique for preserving the wings of moths and butterflies in paper. As the Boston Evening Transcript (1899) explained, Denton sketched and engraved the bodies and outlines of his individual specimens.  Then, the wings of the once fluttery creatures were soaked in various gums and waters and then delicately laid onto prepared paper.  Weights were applied, and after 24 hours, the wing frame was gently brushed away, while the scales had transferred to the page in a form of lepidine transfer process. Along with 400 photographic illustrations, Moths and Butterflies contains dozens of such colourful – and slightly creepy – butterfly wing prints. Denton, an American naturalist who also produced a series of models, books and prints for the United States Fish Commission at the Smithsonian Institution and the New York Fisheries, Game and Forest Commission, was attempting to show 'our native butterflies and moths not as dried and mutilated specimens in a cabinet... but as one sees them in our woods and fields, fresh and lovely.'  His text that accompanies his specimens demonstrates his genuine fascination and love for the creatures. He also thought his extraordinary work might have wider interest or use:

From the standpoint of the artist and the decorator, the study of the designs and color patterns on the wings of butterflies may be of valuable assistance. Such combinations of pleasing tints are rarely found in the handiworks of man. What better school could be found for the colorist than is within the reach of the humblest aspirant for fame as artist or decorator? Think of students copying the dingy works of the old masters year after year, when at their own doors the grandest combinations of colors that Nature can reproduce are passed by without a thought!

How true. We wonder if Damien Hirst has a copy?

The scientific response was less happy. The method, which can be traced back to the eighteenth century, has not been replicated, with the exception of a collection of Sri Lanken wings (Lionel Gilbert Ollyett Woodhouse, The Butterfly Fauna of Ceylon (Colombo, [1950]) [shelfmark STB (B) G 70] . For scientists, the method does not preserve the membranes of the wings, and the glorious lustre and sheen aside, the colours and shapes can be replicated by other printing methods (such as chromolithography in Denton's day, or even hand-colouring). The cost in numbers of creatures gently put to sleep by potassium cyanide is also very great. Denton states that he used 50,000 butterflies and moths in the production of the print run. 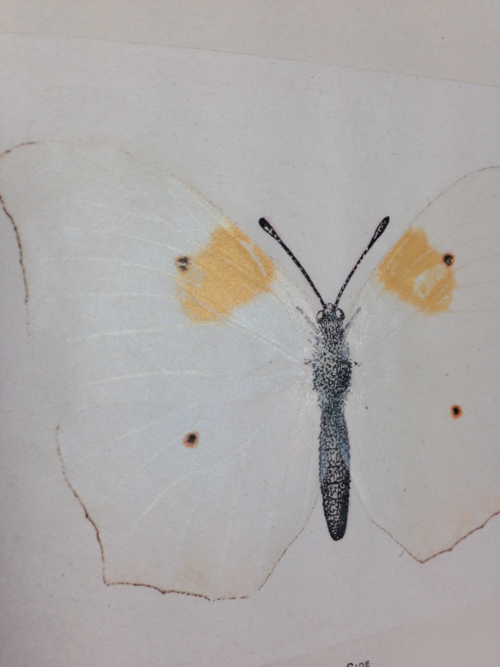 (a photograph attempting to show the shimmer in the wings) 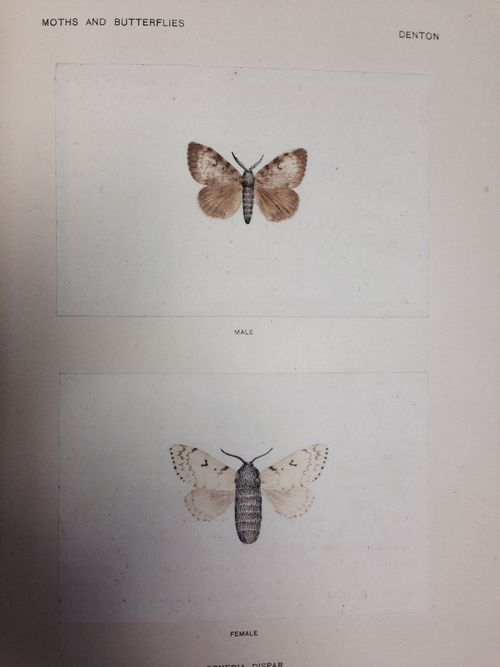 (not forgetting the moths. All images in the public domain)

Fantastic article! Thank you so much for providing such detailed information on the process used to create this work. We recently added another book, entitled "Butterflies Collected in the Shire Valley," to the Biodiversity Heritage Library that uses this same process: http://biodiversitylibrary.org/item/173070. We will have a post about it later this month on our blog.

I was writing to let you know that your link to BHL at the end of the article actually links to the Boston Evening transcription. The correct link is: http://biodiversitylibrary.org/bibliography/12448#/summary.

Thanks again for a lovely article!

Many thanks, Grace. I've updated the link, and look forward to your post!