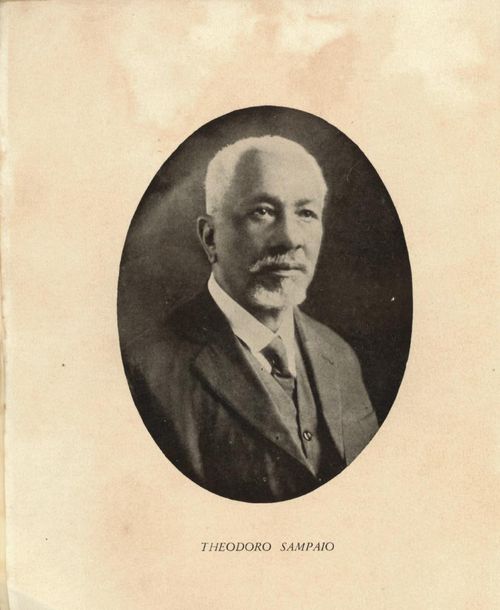 While working on entries to the forthcoming Dictionary of Caribbean and Afro-Latin American Biography I have been exploring our collection of writings by the Brazilian engineer, geographer, cartographer, architect, and ethnographer Teodoro Fernandes Sampaio (1855-1937).

Many of you may have been following the recent debates and protests regarding the massive public investment in the World Cup and Olympics in Brazil. Indeed, public works projects have historically been at the centre of re-inventions of the Brazilian nation and usually a source of controversy. And the work of Teodoro Sampaio is a fine example of this. Sampaio lived through some of Brazil’s greatest historical transformations: from slave-society to industrial capitalism, from the Imperial era to the Vargas nation-state. Sampaio not only lived through these transformations, however, but was at the heart of many of them – including designing and overseeing the creation of railroads, mapping and surveying the contours and boundaries of the nation, designing urban sanitation systems, and founding many of Brazil’s first historical and geographical institutions.

Sampaio also anticipated many of the great social problems that Brazil would face throughout the twentieth century. His engineering and geographical studies focused on the creation of economic opportunities and social integration. Through his research and writings Sampaio attempted to give voice to the poor and marginalised people of Brazil’s interior and Brazil’s indigenous communities.

One of my favourites of his publications that we hold here at the British Library is the Vocabulario geografico brasileiro - O tupi na geografia nacional (BL shelfmark X.700/22900). The book is essentially a dictionary of Tupi words, however each entry includes an geographical and cultural analysis of the word or phrase. Sampaio systematically unpacks the ways in which social roles and cultural concepts are bound up with geography, and the way geography and landscape shape cultural paradigms. Sampaio also recognised that the Tupi had a detailed and historic knowledge of the Brazilian interior that would be essential to the success of new public works projects. Sampaio studied the local and indigenous knowledge of Brazil’s terrain in order to create some of the best maps and charts and river navigations that anyone has ever done of the interior of Brazil. The Library holds many of Sampaio’s works including the classic O Rio Sao Francisco e a Chapada Diamantina (BL shelfmark X.808/36311).

Next week, King’s College London will be hosting the annual Brazilian Studies Association (BRASA) congress – the first time that it has been held in Europe. I'm looking forward to it and I hope to see some of you there.

Posted by Carole Holden at 2:57 PM