Olaudah Equiano and the draw of the Arctic 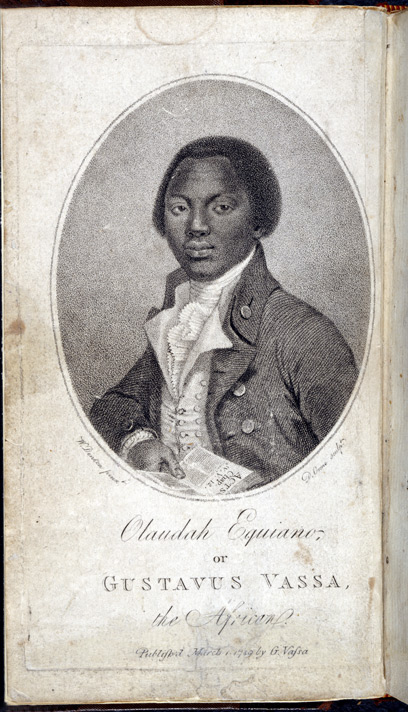 Above: frontispiece portrait from, 'The Interesting Narrative of the Life of Olaudah Equiano' [BL: 1489.g.50]

When I started planning 'Lines in the Ice' there were certain stories I already had in my mind, events from history I thought would surprise the viewer and grab attention in the exhibition space. Alas, not all of these pieces of the narrative make it into the final cut for various reasons including space, the shape of the narrative or because another item tells a similar story better. One such event I wanted to discuss but has recently fallen victim to the hard decisions of exhibition planning is the Arctic expedition on which Olaudah Equiano travelled.

I must confess, before starting work as a curator, at no point had I ever sat down and read all of Equiano's 'Interesting Narrative'. Previously I'd read and discussed key sections but had never made time to digest the account cover to cover. That was until I held the Library's first edition copy and its details began to jump out, the portrait at the front, the extensive list of subscribers (filled with names sure to catch any historian's eye), etc. From then on I was hooked and Equiano's narrative has been one of my favourite items to talk to visitors about (the BL holds quite a few copies).

Equiano is well known to many as the author of 'The Interesting Narrative of the Life of Olaudah Equiano' and, as a result, prominent figure in the campaign against the slave trade. Fewer people realise that Equiano's life was underpinned by travel across the British Empire and beyond, as a slave, an indentured person and an independent businessman at different times. Indeed Equiano's travels were long, complex and varied - as evidenced by his presence on the 1773 journey of Captain Constantine John Phipps to Spitzbergen, part of an attempt to find a passage to Asia via the North Pole.

The connection between Equiano and this particular attempt on the North Pole was Dr Charles Irving, a scientist renowned for his work on water purification to whom Equiano was contracted. Equiano's opinion of the voyage is a wonderful critique of the deluded idea a passage existed via the Pole, stating the journey was, 'to find, towards the north pole, what our Creator never intended we should, a passage to India'. 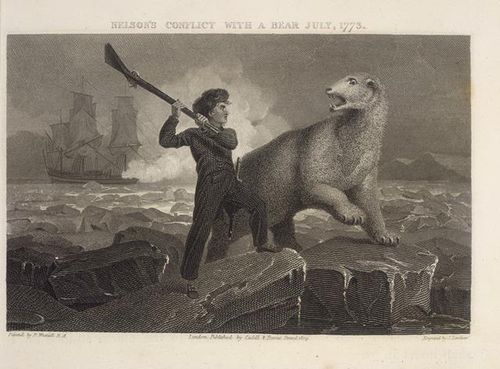 Above: a dramatised depiction of Nelson's encounter with a bear. From, 'The Life of Admiral Lord Nelson' [BL: 1859.c.5]

It is a shame Equiano's role in this journey is little known today, especially given the frank opinions he expresses in his Narrative. Instead the journey is more often remembered for the presence of one Horatio Nelson, who attracted considerable attention with his ill-conceived hunting trip. That being said, the presence of both individuals underlines a point I made in a recent post about Franklin, which is how important these potential routes have been at various points in the histoy of the British Empire and Europe in general. Indeed, so notable were these journeys of exploration that they drew some of the greatest writers, thinkers and explorers of the time.

That Equiano did not make it into 'Lines in the Ice' is the fault of Phipps's destination; British attempts on the North Pole and Northeast Passage are not a focus of the early part of the exhibition. That being said, given the restricted length of exhibition labels, maybe Equiano's interesting journey is better suited to the extended space of a blog post. For those of you who'd like to read more about Equiano you can find copies of 'The Interesting Narrative' as well as Vincent Carreta's biography, 'Equiano, the African' [BL: m05/39533] here at the British Library.

Posted by Philip Hatfield at 9:33 AM