Christmas, locked in the ice 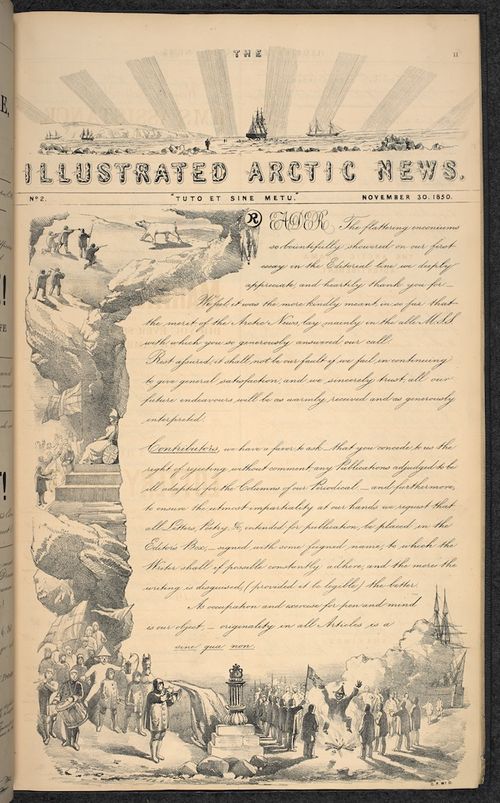 Above: winter in the Arctic, from The Illustrated Arctic News [BL: 1875.c.19]. Courtesy of Images Online.

While researching Lines in the Ice one thing that has repeatedly struck me is the scale of the Arctic expeditions. Today we tend to embody these journeys in a single person, Amundsen, Franklin, Frobisher, Parry, Ross, and so on, but the reality is that even the smallest expeditions (such as those led by Dr John Rae) were made up of at least a handful of men. Meanwhile the largest expeditions, such as that led by Franklin in 1845, were more like mobile communities, over a hundred men all sharing adventure, danger and cramped surroundings.

At no time of year is this brought home more than Christmas. While many prepare for a break, time with family and all the comforts of the festive season, my mind is drawn back to the various documents the Library holds that recount how sailors in the Arctic tried to make the winter more bearable. The Illustrated Arctic News, on display in the exhibition, is a wonderful example of how crews attempted to pull through the darkness and boredom of the Arctic winter. The heavily illustrated newspaper, published on board HMS Resolute then reprinted upon the crew’s return to London, depicts various winter celebrations, a Guy Fawkes bonfire (seen above), a festive ball (complete with formal dress for men and women) and note on Christmas Day celebrations, but its production was also a tool for warding off boredom.

Above: the winter may be long and dark but the sun would eventually return (and hang around), from Arctic Expeditions from British and Foreign Shores [BL: 10460.g.1]

It may be hard to imagine today, given the level of access to learning in the UK, but many sailors signed up for Arctic expeditions to get an education. While the winter may have been cramped, cold and dangerous it also meant little work could be done and so sailors would be taught how to read, write and do maths. This was not purely philanthropic on the part of the officers, it was mostly a way to keep the crew occupied and avoid depression, but, combined with good pay, the possibilities offered by a winter’s education were appealing to many sailors. Papers such as The Illustrated Arctic News, while organised by officers, were part of this system of education as they provided an output for the lessons learned by the crew.

Of course, should the crew make it through the winter (low supplies, the ship being ‘pinched’ by the ice and many other risks were a constant danger) the sun would eventually return and a summer of back-breaking work would begin. As the temperature rose and the sun stayed in the sky for longer the crew could look forward to trying to navigate (and manually cut) the ships through the ice, man-hauling impossibly heavy sledges over land and all the other chores involved in Arctic exploration. Should they make it home, however, even if the Northwest Passage remained undiscovered, the crew would hopefully carry a unique record of their endeavour and a little more education with them.

Above: the return of the sun means getting back into the field, from The Illustrated Arctic News [BL: 1875.c.19]. Courtesy of Images Online.

Lines in the Ice will be open until spring 2015 but, given Christmas is such a feature of the exhibition (even Santa makes an appearance), the festive season may be a good time to come and have a look around (just be sure to check the Library’s opening times). Meanwhile, Team Americas are gearing up for the festive break, so happy holidays everyone!

Posted by Philip Hatfield at 11:48 AM