Perspectives on the Passage: encountering the explorers 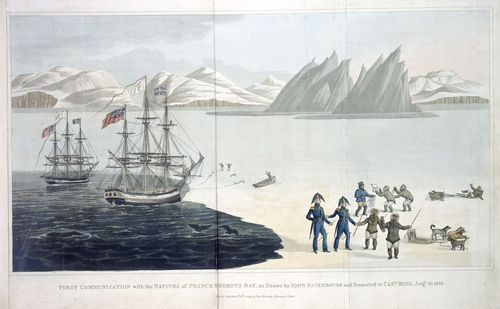 Above: a first encounter between Ross and the Inuit of Prince Regent Bay [Shelfmark: G.7399]

One of the themes Lines in the Ice draws out, across the length of the exhibition, is that the story of exploration does not occur in an empty land. It can be easy to forget this, we still often imagine the Arctic as a remote and hostile place and the narratives of explorers that were left to us often treat the indigenous people they encountered as an aside from the grand adventure at hand. This overlooks the crucial role Inuit and other indigenous peoples have played in the exploration of the Northwest Passage and other areas of the Arctic. Indeed, even exploration of the Antarctic owes a debt to indigenous knowledge; Amundsen used many techniques he learned from Arctic Inuit on his quest for the South Pole (although it's worth noting Amundsen always stressed how much his success owed to Inuit knowledge).

As well as Amundsen there are other expedition leaders who buck the trend of underplaying Inuit culture and agency. Sir John Ross, captain of the 1818 expedition to chart the Northwest Passage, took a great deal of interest in the cultures he encountered, especially the Inughuit. Ross was the first European the Inughuit had encountered and he spent a large amount of time in his published account detailing this encounter and what he learnt about a group he called the, 'Arctic Highlanders'. Indeed much of Ross's account was devoted to discussing the cultures, landscapes, animals and plants he came across, much to the chagrin of Sir John Barrow. Barrow thought Ross had given up his quest for the passage too early, perhaps even spuriously, and so Ross's fascination with the people and ecology of the Arctic was mocked by Barrow for years to come. 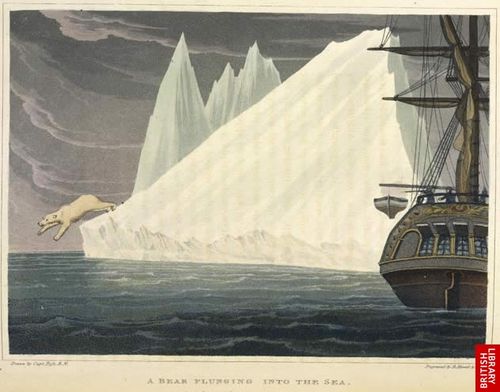 Above: Ross and his crew also took an interest in Arctic flora and fauna, although a more invasive approach was taken in the 19th century [Shelfmark: G.7399]

Adding interest to this story is the fact that another historic perspective of Ross's expedition still exists. Playing on a sound point in Lines in the Ice is an account of Ross's arrival told by Lena Kingmiatook, a 20th century resident of Nunavut. This account is an oral history handed down over the generations and it tells us how disorientating contact with these outsiders and their gigantic ship was. We are also reminded that culture clash is not one sided, with the Inuit account focussing on the odd smell that came with the kabloona (white people), and that both groups attempted to mediate first contact in a friendly and productive way, as the local shaman and elders worked to generate a productive first meeting.

Kingmiatook's account stresses to us the strength of Inuit oral history as a means of passing information across generations, something the 2014 finding of Erebus, in an area local Inuit long claimed the ship lay, also reminds us of. For Lines in the Ice we have been fortunate to be able to tell these two stories together as the result of a loan from the Canadian Museum of History. More on this collection can be found here, there is also a book on Inuit-explorer interaction, 'Encounters on the Passage', held at shelfmark: YD.2009.a.764.

Posted by Philip Hatfield at 2:24 PM