Above: the cover of 'Fighting Australasia' [BL: 9081.h.9]. From the BL-Europeana learning resource.

This week sees the beginning of two distinct commemoration events for nations who supported Britain in the First World War. While last year saw a number of events to mark and reflect upon 100 years since the start of the war, for Australia, New Zealand and Canada this year marks a century since two of their most famous battles. Indeed, that description falls somewhat short as the battles in question are understood to have an enduring effect on the national identities of these countries.

For Australia and New Zealand, Saturday's ANZAC Day marks 100 years since the Gallipoli landings. While ANZAC Day now serves as a more general commemoration for those who fell in both world wars and an opportunity to reflect on all soldiers lost in conflict, it was initially intended to commemorate Gallipoli specifically. Given the enduring political and social legacy of ANZAC involvement in those landings and the continued significance of ANZAC day in general this Saturday is therefore an important moment of reflection. 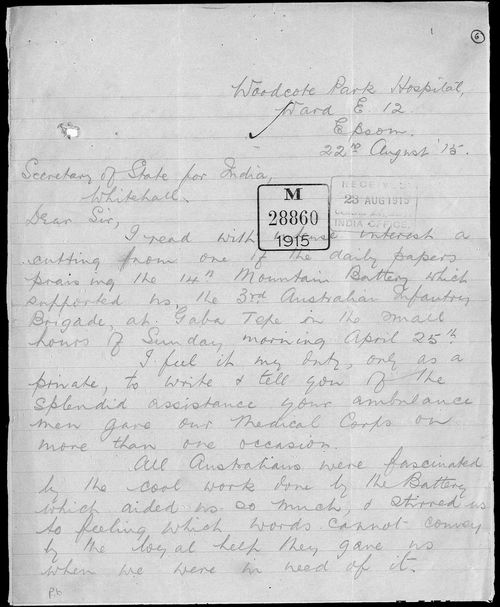 Above: 'Letter of appreciation for the assistance given to the Australian Medical Corps by Indian ambulance men at Gallipoli' [BL: IOR/L/MIL/7/18921]. From the BL-Europeana learning resource.

In Canada this week has also marked a century since the beginning of the Second Battle of Ypres. Perhaps less well known that Gallipoli, the battle saw Canadian forces play a significant role in stemming German attempts to break through a strategically vulnerable point on the Allied line. During over a month of action the Canadian forces showed mental strength and tactical prowess to form a central part of the effort to repulse the Central Powers, even defeating a German force at the Battle of Kitchener's Wood. 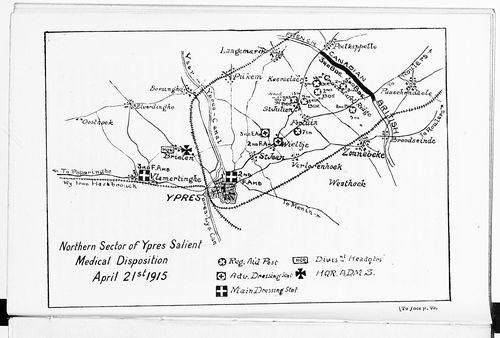 Above: a map of the medical provisions at Ypres, one day before the battle began. Found in, 'The War Story of the Canadian Army Medical Corps' [BL: 9084.b.21], from the BL-Europeana learning site.

While Gallipoli is marked by tragedy and Ypres a sense of martial pride, there is a common thread in these battles that links Australia, New Zealand and Canada. Through sacrifice and success the soldiers from these dominions demonstrated an ability to 'hold their own' on the world stage. For all three nations these battles are viewed as crucial points, where a bridge between dependency and independence was irrevocably crossed. As a result, what is remembered this week is not just the fallen but what they are understood to have built.

Last year the Library took part in an international project to digitise the material history of the First World War. This material is now available online via the Europeana 1914-18 website and provides sources to analyse and research the enduring impact of this conflict. There is also a learning site, put together by the British Library Learning team that provides an introduction to many of the war's key events and consequences.

Posted by Philip Hatfield at 5:25 PM