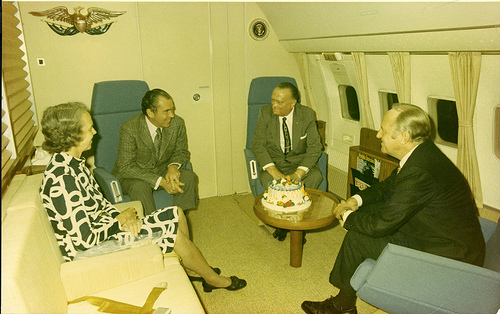 It was a great pleasure last month to hear Alexander Butterfield in conversation with Professor Iwan Morgan at the Library. Butterfield was a trusted member of the Nixon's inner circle since the President's inauguration in 1969. By February 1971, Butterfield was instructed to oversee the installation of the now infamous White House taping system. In 1973, he revealed its existence to the Senate Select Committee and the Watergate investigation was transformed.

Now in his late eighties Butterfield provided clear and humorous insight into life in the Nixon White House. For me, the talk reminded me of a long shadow that hung over the U.S. Executive until 1972, that of J. Edgar Hoover. Hoover was brought to mind, not because he was mentioned directly, but in 1937, a Richard Milhous Nixon applied to join the FBI. From the documents available in the FBI online Records, it appears that Nixon passed all the various tests required. Nor did the extensive background checks flag up anything untoward. Nevertheless Nixon was not appointed a FBI field agent, though no explicit reason was given. However, a memorandum to Hoover, on the 18th March 1954, stated that:

“[T]he reason for the cancellation of the appointment is not reflected in the file. It may be assumed that the view of the fact that Mr Nixon was not immediately available for appointment, and based on our needs in August of 1937, that the appointment was cancelled.”

It is no coincidence that this memo was written at this juncture. By 1954 Nixon was in his second year as Vice- President in the Eisenhower administration. Indeed, from November 1946 when Nixon was elected as Representative for California, along with John F. Kennedy for Massachusetts and a Senator Joseph R. McCarthy for Wisconsin, all of the aforementioned would have received a fresh FBI file as newly elected legislators. Clearly in the subsequent years of Congressional service, Nixon and Hoover’s relationship must have developed, not least because Nixon’s anti-communist views were closely aligned to those of Joseph McCarthy’s who courted Hoover’s friendship from his arrival at the Capitol.

As McCarthy’s recklessness “threatened to the respectability of Republican anti-Communism”, Eisenhower used Nixon as a go-between in an effort to restrain the maverick Wisconsin Senator. Nevertheless, the closeness of the Nixon/Hoover relationship over the years was possibly best illustrated by Hoover’s bragging in FBI circles that he had created Nixon. This would have been reinforced in Hoover’s own mind when as President–elect Nixon met with Hoover early on at his transition headquarters in New York, promising him, 'Edgar, you are one of the few people who is to have direct access to me at all times.'

Inevitably Hoover held the whip hand in their relationship since on the two occasions when Nixon came under pressure to force Hoover to resign and summoned him to the Oval Office, he always left with his position as Director of the FBI intact. It was heart disease and not the Executive which ended J. Edger Hoover’s tenure.

Ironically, it was at that meeting in the Hotel Pierre in New York where Hoover planted the seed that would ultimately result in Nixon’s downfall.

Hoover warned Nixon, who as President-elect would attend the White House as the guest of the incumbent, then President Johnson, that he should be careful what he said, because 'Johnson had installed elaborate electronic equipment which enabled him secretly to record conversations in the Oval Office.'

On Nixon’s orders his deputy assistant Alexander Butterfield instructed the Secret Service to install recording devices in various locations around the White House, including five microphones fitted into the fabric of the Oval Office desk.

A collection of Nixon’s recordings are freely available online: http://www.nixontapes.org/index.html