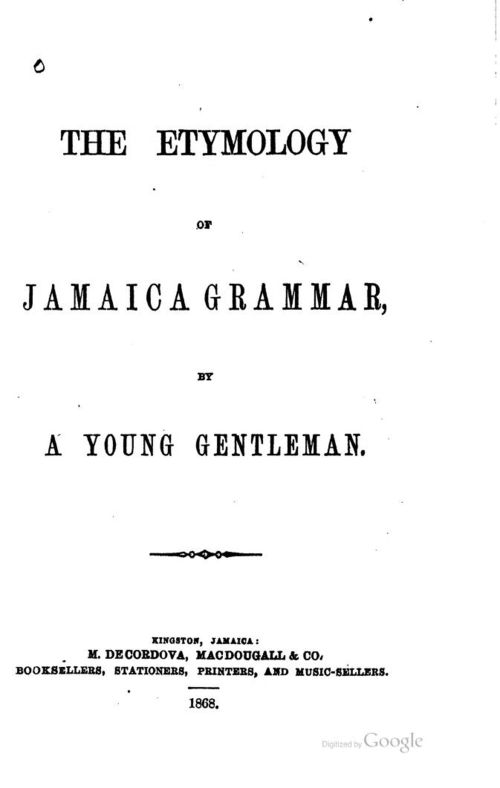 I first came across The Etymology of Jamaican Grammar, the lone work of one Thomas Russell, within Voices in Exile, the beautiful compendium of sources assembled and analysed by Jean D’Costa and Barbara Lalla.  Written in 1868, Russell’s work moves through the linguistic landscape of the Jamaican Creole language as a clear imperial observer, bemusedly watching shop arguments and categorising what he sees as further proof of the racial stereotypes fermenting throughout the course of the 19th century.

The life of Russell remains almost completely obscured to us.  The tone and structure of his work, written in a particularly tumultuous moment for Jamaican politics, suggests that he came from a good education, which in turn leads us to suppose that he was white or mostly white and belonged to the middling to upper classes.  In turn, Russell addresses himself as a ‘young gentleman’ in the title of his work.  His younger age can also be attributed to the swagger that his book occasionally possesses, enthusiastic but also arrogant.  However, aside from these general aspects of his social positioning, clues remain few and far between.  Published in Kingston, his book received scarce advertisement and a single newspaper review.  Thomas Russell never published again.

All we know in certainty is that a copy eventually found its way into the library of progressive academic Alpheus Crosby, who published anti-racist literature under the mysterious pseudonym of ‘Quintus.’  Unfortunately, his cover was eventually blown and his position as classics professor at Harvard was revoked in the late 19th century.  Indeed, we might presume that Russell’s work resonated with Crosby’s tolerant ways in two vital respects.  The first is his attempt to structure the Jamaican language.  By claiming that Jamaican Creole exhibits rules, Russell raises its status from that of dialect to that of language. Russell’s various observations and small anecdotes could have manifested themselves in another work of Caribbean fiction from the 19th century.  He could easily have produced another Captain Clutterbuck’s Champagne, a work of satire in which the author William George Hamley depicts his Creole servant character as behaving ‘as a parrot does when listening.’  Instead, he approached it from a more academic perspective. 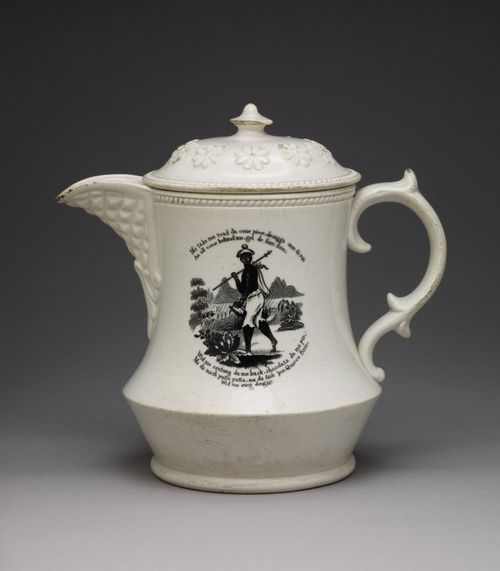 Above: Tea Pot, roughly dated 1820-40, from Jamaica depicting the ‘Quaco Sam’ poem, the origins of which Russell briefly touches on in his work. (used under a CC BY-NC-SA 4.0 license from the British Museum)

The second note that must have resonated with Crosby relates to the submerged culture that Russell glimpsed beneath his own imperial veranda. Russell’s work begins with the contention that ‘surely deserves some further notice, save that of an occasional pilfering of its rich and expressive construction and idioms.’  It is dismissive, he continues, to use it to simply ‘wring out a laugh or to brighten social gatherings, when “dry” English fails.’ Coffee-shop politics or not, the simple structure of Russell’s work engages with Jamaican Creole on an unprecedented level in the Caribbean.   Russell might not have agreed wholeheartedly with Paul Keens-Douglas’ frustration that ‘dialect cool/but not for school’ but his engagement with Creole led him to contest the language’s position as a mere distraction in a similar way.

Despite the promise of Russell’s work, I was initially disappointed by it.  Russell is quick to dismiss Jamaican Creole as a corruption and explains some fascinating aspects of this language as signs of apathy.  However, I began to realise that Russell’s book wasn’t the watershed I initially presumed it to be, it was something far more interesting instead.  What Russell depicts is the lens of a coloniser through which a unique Caribbean product of unique intellectualism.  I began to notice that Russell rapidly retreats into racial stereotype in simple explanation of these politics from below, perfectly symbolising the typical imperial trait regarding fear of what lay outside the coloniser’s control.

Only one year later, the incredible Trinidadian intellectual and schoolteacher John Jacob Thomas would claim the aliveness of the Creole languages and their inheritance of African linguistic traits in his work The Theory and Practice of Creole Grammar.  This assertion is one that would be supported by academics almost exactly one hundred years after this publication as the discipline of Creole linguistics exploded into existence.  However, Russell’s work offers us a highly intriguing early angle on this linguistic development.  Not only does it demonstrate these Creole linguistic traits in a heavily diluted form.  It also depicts the challenge that they posed not only to an imperial way of thinking but to European intellectual thought as a whole.

Russell’s struggle with Jamaican Creole ends with a mock warning.  He states that those who study it for too long be careful in case they lose their minds trying to understand it, playing on the humour that Creole language was frequently observed with in 19th century literature.  I like to think that he was giving away more than he thought here, trapped as he was within European frameworks of interpretation that he would be required to reconfigure in order to fully appreciate the nuanced power of the Jamaican language.

Kamau Brathwaite – The History of the Voice

Posted by Philip Hatfield at 1:43 PM