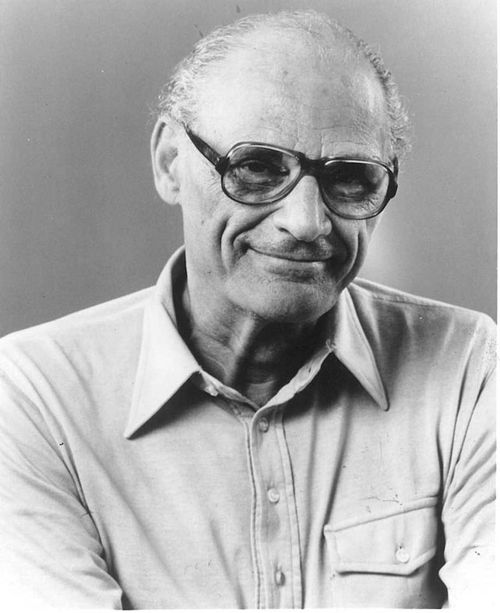 Arthur Miller.  Image believed to be in the public domain (Wiki Commons).

Once again a search through the Library’s holdings revealed some fascinating items. Particularly notable is a 1970 conversation on the Theatre in Video database between Miller and playwright Israel Horovitz – twenty years Miller’s junior – about the writer’s role in society and the state of American theatre.

Responding to Horowitz’s belief that none of his own plays are worth the $40 or $50 then being charged by New York theatres, Miller assures him that no play is worth that. Indeed, Miller condemns the sky-rocketing prices as an absurdity that makes unrealistic demands of the play – ‘everything’s got to be a masterpiece’ – and drives down attendance. Not only does he do anything to avoid buying such tickets himself, but, Miller confesses, he’d urge everyone else to stay home too; for him the only viable way forward is publicly-subsidised theatre.

Turning to ‘the great freeze’ of the 1950s, Horovitz – lounging in his armchair, cigarette permanently alight – asks what causes public apathy. People are bored, explains Miller, because they’re frightened. They become apathetic when they’ve turned their back on experience. Miller recalls that he wrote The Crucible to show that ‘hysteria doesn’t solve anything’; that it kills people. But at its opening in New York in 1953, as soon as people realised this, ‘you could hear ice forming on top of the audience. You could hear it cracking as it busted through everything.’ Reviews the next morning described the play as cold. But when it was revived a few years later – after Joe McCarthy had died – the same critics, assuming there had been a re-write, praised its new-found warmth. Yet, as Miller wryly notes: ‘I hadn’t touched the script … it was them that had been re-written’.

And an article in the New York Times (online or on microfilm (MMF.MA3)) on 9 March 1953 sheds further light on Miller’s exasperation with his critics. Responding to the American Bar Association’s suggestion that certain lines in The Crucible should be deleted for disparaging lawyers at a time when respect for the law had never been more important, Miller cautions that the public’s growing sensitivity to open and honest debate is of no service to civilization. First, Miller informs the ABA, The Death of a Salesman led to ‘several organizations of sales people’ flying to arms; now it is the turn of lawyers. And if he were to write about those who did nothing, so ‘café society will probably feel put upon.’ Defending his right to speak and write the truth as he sees it, he concludes, ‘I must insist upon the play as it stands.’