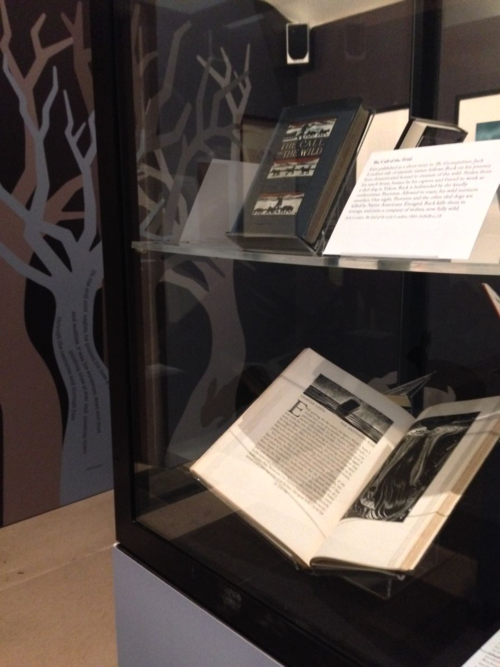 Our Animal Tales exhibition includes a lovely edition of Melville’s Moby-Dick. Published by the Lakeside Press in 1930, it features illustrations by Rockwell Kent. I’ve always thought that Melville’s powers of description render illustrations unnecessary, and in many ways prefer to maintain my own vivid internal pictures of Ahab, Queequeg, the Pequod, Moby Dick et al, conjured up by that wonderful prose. But there’s still much to enjoy in some of the various illustrated editions of the book that have appeared over the years since the The Whale (as it was originally titled) was published in London on October 18, 1851. The more familiar title of Moby-Dick; or The Whale, came with the first U.S.edition, published in New York a few weeks later on November 14.

The Rockwell Kent (1882-1971) illustrations are my favourite. Kent was a man of many parts - artist, writer, political activist, enthusiastic traveller. His long, varied and controversial career can’t be covered in a simple blogpost (read his Wikipedia entry to get an idea), but in many ways, he would seem to be a perfect illustrator for Moby-Dick. Kent was no stranger to adventure, remote locations and sea voyages, and published a number of books and memoirs on his travels and experiences. During the period between WWI and WWII, he enjoyed a notable reputation as an artist, producing work in a variety of media, but his seascapes were particularly popular. In addition, although he was a resolutely realist painter, he frequently employed symbolism in his work – so who better to illustrate Moby Dick, ‘a creature truly wild and open to any number of symbolic interpretations.’ And the editors at Lakeside thought so too. They in fact first approached Kent to design an illustrated edition of Richard Henry Dana Jr.’s Two Years Before the Mast, but it was Kent himself who suggested Moby-Dick instead.

Lakeside Press was a publishing imprint under R.R. Donnelly, based in Chicago. Moby-Dick was to be one of its Four American Books Campaign, aimed at building its reputation as a printer of fine trade editions, as well as proving that it was capable of producing  illustrated books every bit as good as the best presses in Europe. Kent wrote to William A. Kittredge (Lakeside’s Director of Design and Typography from 1922-1945) that he considered ‘Moby Dick….. a most solemn, mystic work,’ and that the ‘whole book is a work that should be read slowly, reflectively; the large page and type induce such reading. The character of the type should be homely, rather than refined and elegant, for homeliness flavors every line that Melville wrote.’ He wanted his illustrations to epitomise the mood of the book - the ‘midnight darkness enveloping human existence, the darkness of the human soul, the abyss, -- such is the mood of Moby-Dick.’ (Megan Benton, Beauty and the Book: fine editions and cultural distinction in America. Yale University Press, 2000, pp.105-107).

The editors were delighted with Kent’s first submissions in 1927. Kittredge wrote, ‘Your genius as a thinker, painter, and draughtsman was never more successfully demonstrated.’  Kent continued to work on the book for the next three years, alongside various other activities and expeditions, and finally completed the illustrations in Denmark in 1929. The book appeared in 1930 in a three-volume edition, housed in an aluminium slipcase, and limited to 1000 copies. Kittredge described it as, ‘the greatest book done in this generation,’ and said that, ‘we will all go jump in the lake’ if ‘it is not the greatest illustrated book ever done in America.’ (Benton, p.132, 200) The edition quickly sold out and was followed by an equally popular one-volume trade edition, published later that year by Random House and printed by Lakeside.

Although Melville’s epic tale wasn’t exactly unknown in 1930, it wasn’t considered the classic that it is now. The popularity of the Lakeside and Kent edition of Moby-Dick therefore played some part in helping to establish its status as a masterpiece of American literature. As John Lewis writes, ‘There is a mystic streak that runs through [Kent’s] work, enabling him, if not to match Melville’s magnificent prose, at least to give some pictorial substance to this allegory. Maybe no sperm whale ever reached to the stars……Melville makes one feel it could and Kent has recaptured the mood.’ (The 20th Century Book, The Herbert Press, 2nd rev ed. 1984, p.146)

Kent's illustrations for Moby-Dick are still in copyright but you can browse some of them on the Plattsburgh State Art Museum website.

Posted by Carole Holden at 4:50 PM