The Kingdom of Flying Men 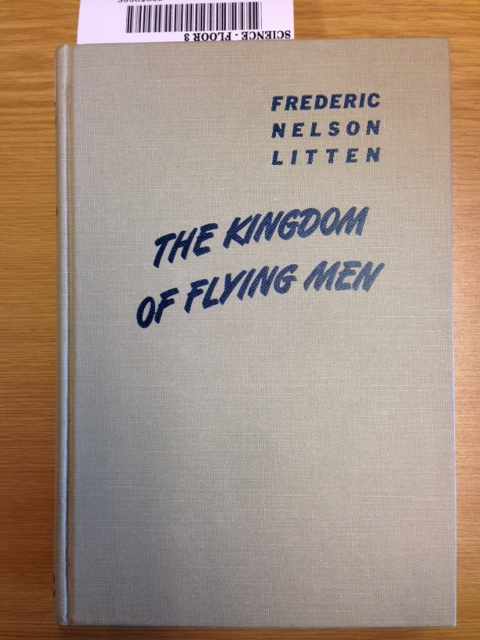 For various reasons, I have been looking back at my time in Team Americas, and thought it may be interesting to do some short posts about the items we've acquired since 2004. Looking back at the files, the first thing I ordered was a novel from 1956: Frederic Nelson Litten's The Kingdom of Flying Men (Philadelphia: The Westminster Press; shelfmark YD.2004.a.3998). The bookseller noted that it was 'a beautiful copy' and described it as 'a novel about the hazards & difficulties of the relatively new field of air cargo.' Was I, in my then-new post, drawn to the parallel novelty of a new field of work? Was it the $100 cost that swung it? I passed on the Women in Sports Car Competition (1958) that was offered above it in the dealer's list, a decision that time may not have vindicated, given the research potential such an item clearly has given the growth of sports studies (not to mention gender studies). Still, I saved the Library $85, and may have been put off by the cost and the NF DJ (near-fine dust jacket) which we tend to avoid for our collections.

But back the the Flying Men. It has provenance: there is a bookplate 'From the Books of Elsie W. Hoffman', and a curious publishing history. Westminster is known for its religious publishing, put produced the odd novel to raise funds. This is a rare example of such a thing. And it's true; it is a beautiful, if slightly austere, example of mid-century printing. Good untrimmed paper, and clean boards, and an object that sits well in the hands, asking to be read.

The author, the Foreward reveals, flew for the Army in the 1930s, when the 'sky kingdom' was 'uncharted, little-known'. Today, he writes with only slight hyperbole, 'Time and linear measurement have lost significance; Europe is within commuting distance'. So, as well as an example of US publishing history, the novel offers an insight into aviation, something which has indeed changed the world, and is now a subject of study from a range of perspectives; not least environmental history. Litten himself was a prolific author (born in 1885), specialising in aeronautical tales, many of which were aimed at a younger audience. Here's his Air Mission to Algiers, via HathiTrust. He also published over 600 short stories, at a time when periodicals were a viable outlet for an author. Indeed, he developed the '8-Step System of Plotting', the secrets of which could be add via Frederick Litten Associates for $1, or advice on 'How to Write for a Living' for $2, according to a contemporary advertisement in The Writer magazine. Again, more examples of how mid-century authors got by. He also seems to have done his research, as there is a considerable list of thanks to those he consulted while researching the book.

It starts well, with the young pilot Johnny Caruthers returning home from WWI on board the SS Rawlins Victory, writing to the director of Personnel at Trans-American Airlines in Chicago suggesting a scheme employing ex-servicemen as civilian pilots. He, however, needs an airmail stamp, and we are introduced to 'Stormy' Morgan, an injured pilot, who Caruthers persuades to return to skies. Several adventures and 247 pages later, we arrive at the last lines: 'Stormy's vision looked beyond to a sky that was filled with planes. The rolling thunder of their exhaust reached him across the frontiers of the kingdom of flying men.'