Join us for the Eccles Centre Summer Scholars series

Each year, the Eccles Centre for American Studies supports numerous fellows to conduct research in the Library's North American collections. Over the years, the Centre has supported over 140 Fellows.  As part of this, they run an annual Summer Scholars series which gives Fellows an opportunity to present the findings of their research to a public audience.

The talks run throughout July and August on Monday and Friday lunchtimes, between 12.30-14.00 and are free for all to attend with no booking required. 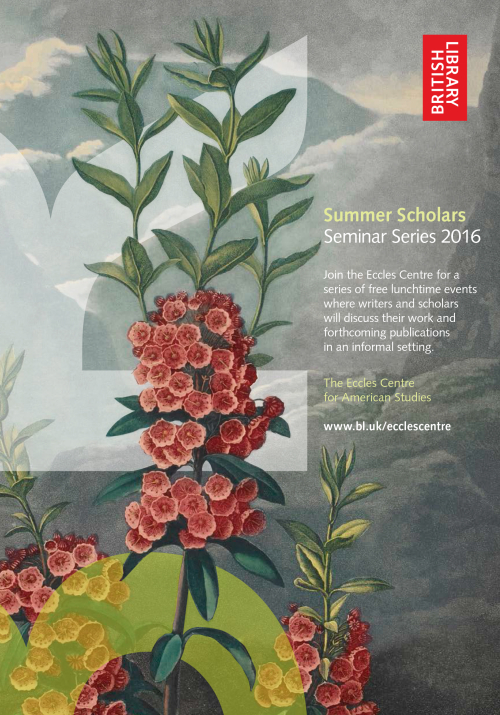 The 2016 series opened with a talk by author Gaiutra Bahadur on her book Coolie Woman.  Working from the starting point of her grandmother's history, Gaiutra spoke about her strategies for overcoming elisions and biases in the archives that document the migration of bonded labourers from the Indian subcontinent to the West Indies.

We've also seen talks from Emily Trafford who examined how Progressive era World's Fairs became key sites of battle over the representation of the Chinese in America, and Hannah-Rose Murray whose work in the digital newspaper archives has uncovered a fascinating and lively history of African American abolitionists in the UK.

Forthcoming talks in the series cover a broad range of topics, from Appalachian log cabins, Emily Dickinson, the Ladies' Home Journal, US foreign policy and Pakistan's nuclear programme, discourses of domestic hygience in turn of the century periodicals, the great American desert, and many more.

MONDAY 25 JULY, The British Library Conference Centre Cabin-Fever: deconstructing the log-cabin myth of Appalachia Kevan Manwaring explores the iconic ‘log-cabin’, synonymous with the pioneering spirit of North America. Tracing influences back to Scots-Irish and Scandinavian settlers, this illustrated talk will show log-cabins in a new light.

MONDAY 1 AUGUST, The British Library Centre for Conservation The Poetics of Reticence: Emily Dickinson and Her Contemporaries Eve Grubin discusses Emily Dickinson’s poems and their characteristic style against the backdrop of poetry written by other American women during Dickinson’s time.

The Modern Consuming Housewife From feminine vice to essential feminine interest, Rachael Alexander explores changing attitudes to makeup and fashion as seen in, and encouraged by, the Ladies' Home Journal and Canadian Home Journal of the 1920s.

FRIDAY 5 AUGUST, The British Library Centre for Conservation America, Britain, and the 'Islamic Bomb' Malcolm Craig explores the intersections between America, Britain, Pakistan's nuclear programme, and political Islam's rise in the 1970s. Was Pakistan building an 'Islamic bomb' or was it all just a media scare?

‘What Irish Boys Can Do’ Catherine Bateson analyses more than two-dozen American Civil War songs held in the British Library’s U.S. archives, and explores how ballads sung the story of Irish involvement in the conflict. Dreaming of the Orient during the War on Germs Bianca Scoti discusses oriental rugs in middle class homes and discourses on domestic hygiene in American magazines and periodicals at the turn of the twentieth century.

FRIDAY 12 AUGUST, The British Library Centre for Conservation Selling Black History: from Margins to Mainstream James West examines the content of EBONY magazine as a case study into the production, dissemination and marketisation of popular black history during the second half of the twentieth century.

About Trauma - Constructing Medical Narratives of the Vietnam War Nicole Cassie examines how medical Vietnam veterans have engaged with the evolving psychological and social understanding of post-war trauma. It also explores why they often identify as 'resilient' as opposed to 'traumatised,' despite having experienced some of the worst of the war.

FRIDAY 19 AUGUST, The British Library Centre for Conservation How to Blow Up an Oil Rig... Harry Whitehead’s third novel concerns the oil business. Big subject, overwhelming research. So when to go ‘shallow’, when ‘deep’? And just how do you blow…? Reading Don DeLillo in the Archives Rebecca Harding shares how the materials in the British Library’s collections have helped her to see beyond common critical frameworks in her research, a study of the role of the body in the fiction of Don DeLillo.

MONDAY 22 AUGUST, The British Library Centre for Conservation 'Put all to fire and sword' Nicola Martin compares and contrasts the experiences and encounters of various groups of ‘others’, and considers pacification in the eighteenth-century British Empire from Culloden to Quebec.

Britain and the Anglo-American War of 1812 The 1812 Anglo-American War may be the most overlooked conflict in British history. Peter O’Connor explores the domestic impact of the war with a particular focus on the response of radical democrats within Britain who had held up the USA as a model political system since the Revolution.

FRIDAY 26 AUGUST, The British Library Centre for Conservation The Great American Desert Eccles Centre Writer in Residence William Atkins is working on a cultural history and travel book about the world’s deserts, with a particular focus on the US southwest. He discusses his use of the America’s collections in researching the evolution of the US’s perception of its desert regions, from John C. Frémont’s account of his exploration of the Great Basin in 1843, to the development of an American ‘desert aesthetic’ in the seminal writings of John C. Van Dyke, Mary Austin and Edward Abbey in the twentieth century.

Posted by Mercedes Aguirre at 5:33 PM