Operation Crossroads: 70 Years on from the Bombs at Bikini

July 2016 marks the 70th anniversary of the United States’ first atomic tests outside of World War Two. In July 1946, a joint U.S Army-Navy task force staged two atomic weapons tests at Bikini Atoll in the Marshall Islands. The operation was designed to test the effects of an atomic bomb on naval vessels at sea. Consisting of tests Able and Baker, Operation Crossroads marked the first of over 1900 nuclear tests staged since the end of World War Two.

Seventy years on, what can we learn from Operation Crossroads? 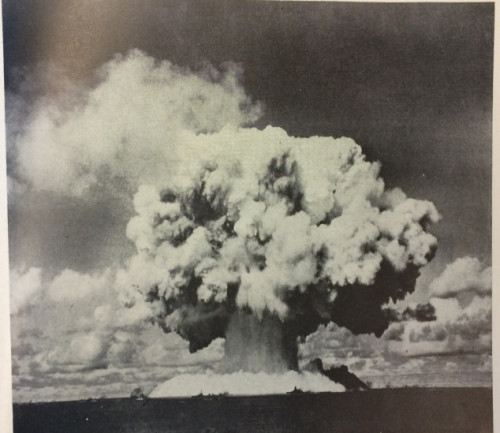 Figure 1: "A Tree Grows in Bikini" Image of the Baker Bomb Test 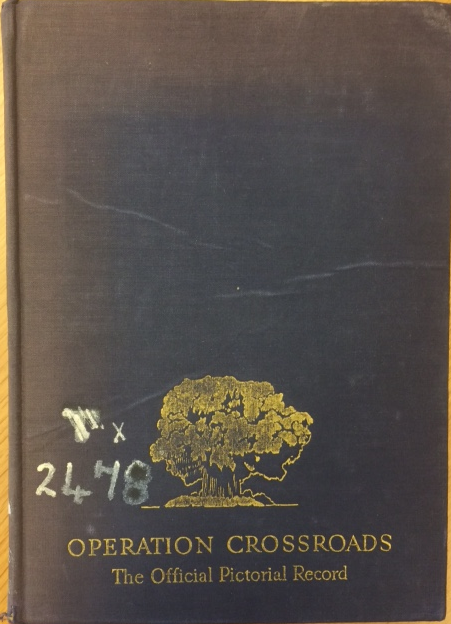 The US collections at the British Library house one of the UK’s only copies of the official photographic record of the operation. Official Pictorial Record of Operation Crossroads, published in 1946, contains a collection of more than 200 photographs documenting all stages of the operation. Not only does the collection offers a unique insight into the operation, but it demonstrates the emergence of the nuclear political culture which dominated the Cold War and can be felt even today.

The first lesson to draw from Operation Crossroads is to understand the sheer scale of the nuclear-industrial complex. The tests involved more than 200 ships, 42000 men and women and 150 aircraft gathered from both the Navy and Army Air Force. A significant number of civilian scientists from fifteen universities and many more individuals from private business and NGO’s also took part. The tests would mark pioneering breakthroughs in the use of remotely piloted boats and aircraft. 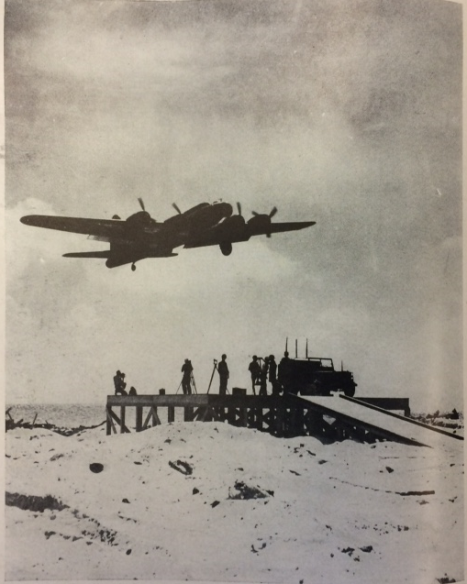 To ensure the operation was reported around the world, a huge legion of domestic and international press representatives were invited as observers. Many of the journalists were offered passage aboard the U.S. Navy vessel ‘Appalachian,’ dubbed, ‘the press ship.’ Technological innovation and cross-sector involvement, relayed globally by the press, underlined the significance of the nuclear-industrial complex which would come to dominate the Cold War years and beyond. 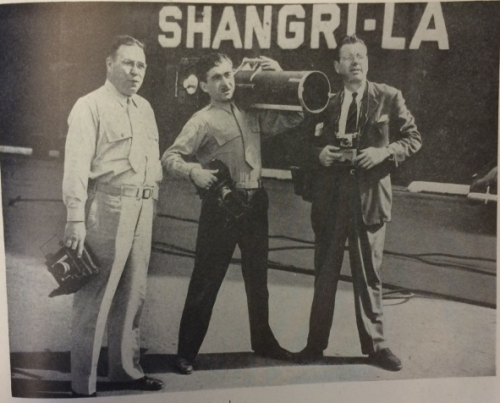 Figure 3: "Gentlemen of the Press"

The mass of cameras used at Bikini solidified the iconic imagery at the centre of today’s nuclear imaginary. More than 50000 still images and 1.5 million feet of film roll were taken during Operation Crossroads. For the global public, the images from Bikini offered their first engagement with the reality of the bomb. The photographs from Operation Crossroads demonstrated the awesome power of the atom which they could only read about previously. The image of the mushroom cloud rising high above the Bikini Lagoon became fixed in the public imaginary and in turn secured its status as the most potent and evocative image of the nuclear age. 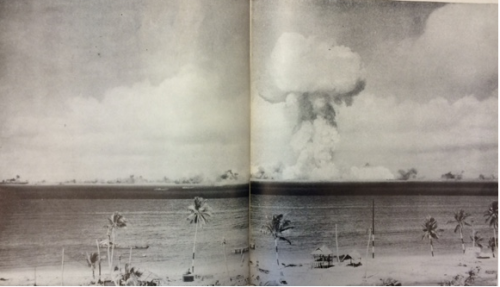 Operation Crossroads also marked the beginning of what we might call nuclear colonialism. Part of the preparation for Operation Crossroads involved the removal, or ‘evacuation’ as the U.S. government termed it, of 167 islanders from their ancestral home. They were relocated first to Rongerik Atoll and then some 250 miles away to the island of Kwajalein.

The islanders believed the relocation to be temporary but, seventy years later, the Bikini Atoll remains far too radioactive for their descendants to return to. The environmental conditions on Kwajalein were not the same as at Bikini and the islanders suffered from a lack of resources and fishing grounds once their U.S. supplied provisions ran out. The islanders are largely written out of the official pictorial record. Whilst reference is made to the beauty of Bikini itself, the inhabitants are largely an afterthought. Less than 1% of the photographs in the collection document the presence of indigenous inhabitants. Those which do exist focus on the ‘happy native,’ thankful to the kind and benevolent American colonialist. The treatment of the islanders and their almost complete erasure form the official record highlights the colonial trend in nuclear testing. From the islands of the Pacific to the Aboriginal lands of Australia, nuclear tests have ravaged indigenous lands around the globe. 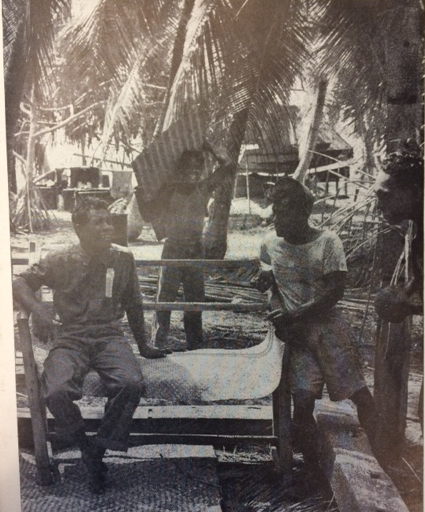 Figure 5: "At Home Abroad" King Juda (far left), of the Bikini islanders, pictured at Kwajalein enjoying the radio given to him as a gift by the U.S. Navy. One of the few photographs of the islanders contained in the record.

Finally, one may argue that Operation Crossroads picked up where Hiroshima and Nagasaki left off in fuelling the arms race which came to dominate the Cold War. The original idea for the operation grew out of a militarised mind-set and fear over the vulnerability of the naval fleet to a nuclear attack. The tests were designed to study the effects of the atom bomb and also to provide studies in how to defend against it. Opposition to the tests did manifest, largely from the Manhattan Project scientific community who warned that the local Pacific waters were likely to become a ‘witch's brew’ of radioactivity. Ignoring such warnings, which turned out to be extremely accurate, the government pressed ahead. In demonstrating their commitment to continued atomic testing in the post-war era, it could be argued that the United States threw down the atomic gauntlet to the rest of the world. Furthermore, alongside U.S. vessels, Operation Crossroads included Japanese and German ships which had been surrendered after the War. The symbolic destruction of these ‘prizes’ did little to undermine the perception of U.S. imperialistic power. 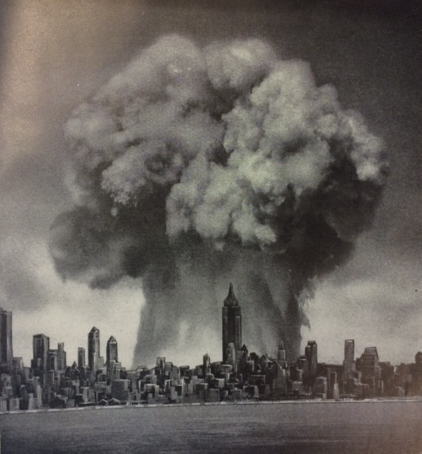 Figure 7: "Bomb vs Metropolis" A composite comparing the size of the explosion of the Baker test with the Manhattan skyline

Seventy years and nearly 2000 tests on from Operation Crossroads, whilst the Bikini Atoll still feels the ecological impact of nuclear testing, the cultural and political ramifications of the first post-war tests remain rather potent.

P.S. Did you know that the tests at the Bikini Atoll were responsible for the introduction of the word ‘bikini’ into the common lexicon? It was adopted to describe the invention of the new two-piece bathing suit and was derived “from the comparison of the effects wrought by a scantily clad woman to the effects of an atomic bomb.”[1]

Posted by Mercedes Aguirre at 9:28 AM