In some ways, the “discovery” of America opened the mental horizons of Europeans: Montaigne’s essay “On Cannibals” (1580) was a landmark in relativism.

In others, the discoveries confirmed what Europeans had long thought but not actually been able to prove.

Pliny was full of tall tales of dog-headed men and men with one huge foot. When the explorers arrived in the Americas, they “found” what they always knew: the name of Patagonia derives from these monsters. The Amazon was populated by warrior women. 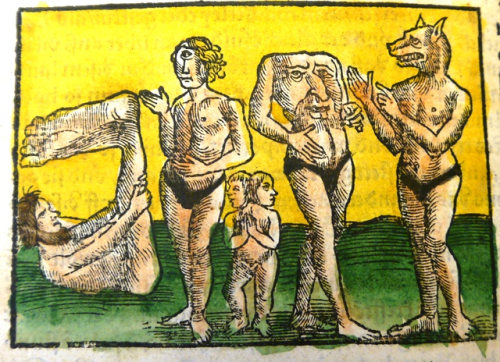 It’s well known that the Spaniards applied the names of European fauna to American animals: tigre (in Spain, tiger) became the jaguar, león (lion in Europe, puma in America), zorro (fox in Spain, skunk in the New World).

Early modern authors viewed America through Pliny (see Lacarra and Cacho Blecua). But Urdapilleta shows that writers who actually lived in the Indies soon cast off these old ideas and relied much more on the evidence of witnesses or indeed their own eyes.

Now, iconographical handbooks originated in the Middle Ages, and derived their pictures largely not from extant works of visual art but from verbal literary descriptions. 44 of these are reproduced in facsimile in the series The Renaissance and the Gods ((London, 1976-; X.425/5375).

The most famous is probably Cesare Ripa’s Iconologia (first edition 1593; first illustrated edition 1603). Writers and painters alike drew on such sources (see Rosa López Torrijos). In this tradition was Vincenzo Cartari, Le imagini de i Dei degli antichi. The first edition (1556) stuck to the gods and allegories of Greece and Rome. 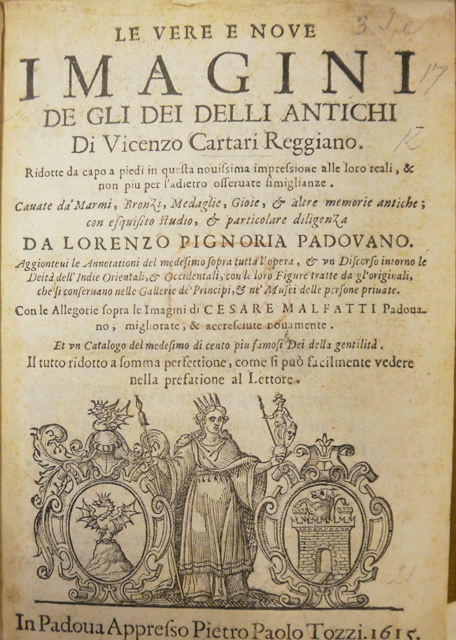 But in 1615 a Second Part was added by Lorenzo Pignoria, with gods of the Indians and Chinese. His source for the American gods was the Mexican Codex Vaticanus 3738. In his prologue, Pignoria follows the argument that paganism alias idolatry (whether Greco-Roman or contemporary) is a foreshadowing of Christianity, because these false religions derived from the Christian truth. He was not a believer in polygenesis: 350 years before Thor Heyerdahl, he maintained that the Egyptians had the seafaring skills to reach Mexico: after all, many accounts of America were thought mere fables until Columbus went there and proved them true. 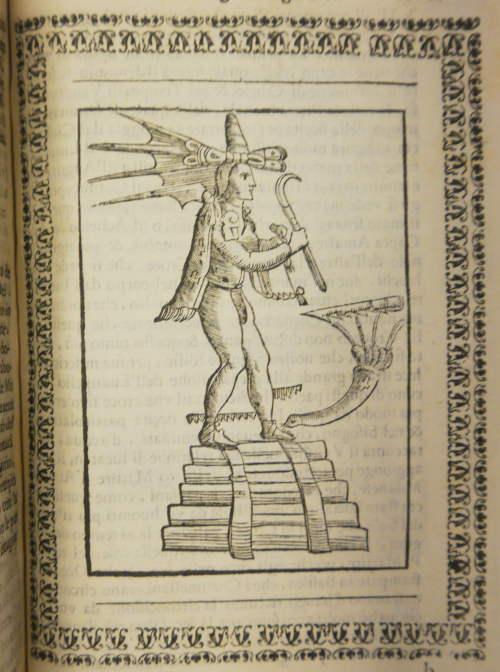 Here is a case in point: the god Quetzalcoatl. His attributes parallel those of the ancients: on his head he bears the pointed stone, related to the knife used by the Devil in the rites of Cybele; in his right hand the lituus (curved wand) as used by the augurs; at his feet the cornucopia; and (the clincher) the Christian Cross on his cloak and on the cornucopia.

What better proof that all religions were one?

Posted by Mercedes Aguirre at 11:59 AM