Of late, I have been scouring newspapers, travel accounts, photos and prints in search of the public performative and recreational life of the West India Regiment – in particular cricket and military bands - as part of an Arts and Humanities research Council collaborative project with the University of Warwick: Africa's Sons Under Arms.

The raising and activity of the West India Regiment coincided with the evolution of Caribbean cricket and incipient nationalist movements. Indeed, by the end of 19th century cricket became one of the most significant expressions of Caribbean popular culture. As Rex Nettleford has argued, “Cricket culture is the vehicle on which West Indians journeyed deepest into modernity,” (As quoted in Hilary Beckles, The Development of West Indies of Cricket Vol.1.  British Library Shelfmark YC.2001.a.9399).

It is thought that the first public cricket game held in the Caribbean was in 1806 at the St. Ann’s Garrison in Barbados – and the 4th West India Regiment had a role in the game (interestingly only 4 years after the 1802 mutiny of the WIR).

I am also looking for evidence of the role of disbanded soldiers and officers of the West India Regiment in the rise of cricket across the region. Bridget Berenton has noted in Trinidad that disbanded members of the WIR after 1815 played a key role in the emerging middle class.

The only known depiction of a slave playing cricket, and the oldest image of cricket played outside of the British Isles, is from Barbados. The image appears on a belt buckle and, though little is certain about the provenance of the buckle, it is thought to be linked to 1st Baron Hotham who was Governor of Barbados in the late 18th century.

19th century newspapers in Barbados consistently advertised the sale of cricket bats and balls. As well as cricket matches held at the St. Ann’s Garrison in Bridgetown. One description of a match at the Garrison involving the 4th West India Regiment in August of 1868 states, “The match attracted a large number of visitors, all of whom were met with the utmost hospitality at the hands of the military,” (Barbados Agricultural Reporter, August 18, 1868).

Sources on the WIR bands thus far have revealed a consistent and significant presence in Caribbean daily life. The bands would drill, march and play for a wide range of events – not only military campaigns – including funerals, religious masses, as well as political rallies. Photographs and post cards also reveal that the marching bands were a key element of colonial imagination and myth. 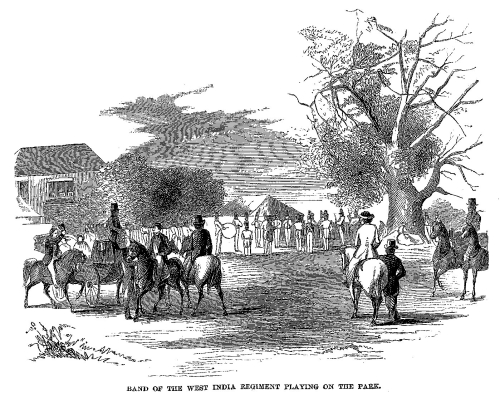 The military bands were iconic images of empire that combined both the idea of colonial subjection and order, with the spread of British culture across the world. 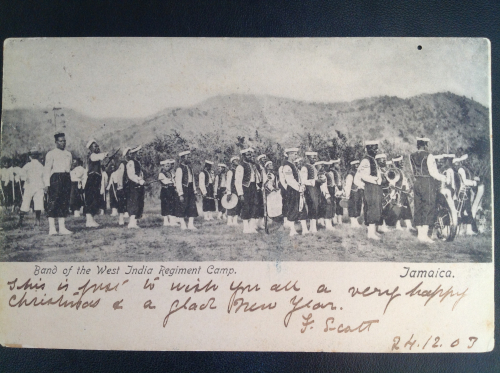 One of the arguments put forth for the raising of the West India Regiment was that it would serve as a civilising force among enslaved and free Africans in the Caribbean. And the coverage of the WIR bands in the great exhibits of the 19th century sheds light on one way the ‘work’ of empire was promoted.

In 1868 the Barbados Globe reported that the Band of the 4th West India Regiment played and marched to mark the return of “White Troops” to the Garrison after having been removed due to a yellow fever outbreak. (Barbados Globe, January 9, 1868, page 2).

The Pictorial World of London published images and descriptions of the West India Regiment Band performing at the “Colonial and India Exhibition” of South Kensington in 1886 (British Library Shelfmark LOU.LON91 [1886]). It was noted in particular that members of the band were “all Christians” and “all spoke English.” The description of the event includes a discussion of the military successes of the WIR, in particular the campaign against the Ashanti in 1872-3.

Yet, if cricket and marching bands have proven to be pillars of post-colonial Caribbean popular culture – and, moreover, embody the social tensions of colonialism and post-colonial society – what, if any, ‘proto-nationalist’ connections can be drawn between the WIR and these fundamental cultural elements of Caribbean society?

My search for evidence and historical surprises continue!

Posted by Elizabeth Cooper at 10:53 AM