The British Library is currently looking for academic partners for our AHRC Collaborative Doctoral Partnerships programme to work on a project which will focus on the Library’s collection of American political pamphlets published between 1920 and 1945. The application deadline is 25 November 2016.

AHRC CDPs provide funding for PhD research drawing on our collections, resources and expertise that is co-supervised by the Library and a selected academic partner at a UK university or Higher Education Institute (HEI). 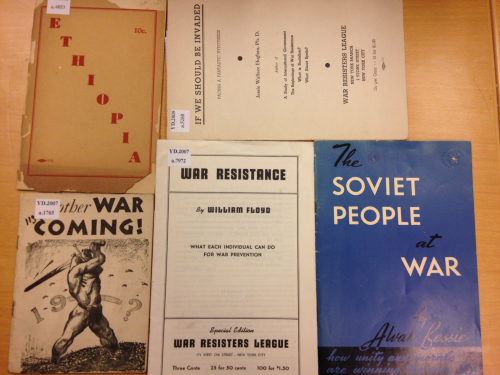 The project will draw on the Library’s extensive holdings of American political pamphlets to study and contextualise the writing, printing, distribution and dissemination of pamphlets in the years preceding and during the Second World War.

The Library’s collection of American pamphlets from the interwar period contains publications by different anti-fascist, anti-capitalist and pacifist societies. These include the Socialist Party of America, the Young People’s Socialist League, the American League Against War and Fascism, the Jewish People's Committee, the War Resisters League, the World Peace Foundation, as well as anti-imperialist societies such as the United Aid for Peoples of African Descent, among many others. The researcher will also benefit from access to the extensive collection of US political pamphlets at the Marx Memorial Library, who is a partner in the project.

Please find more information on how to apply here, and do not hesitate to email us at Americas@bl.uk with any questions.

Posted by Mercedes Aguirre at 10:24 AM