The private life of the Canadian beaver

The beaver is famous as a grafter: hence his adoption as one of the symbols of that industrious people, the Canadians.

In the medieval Bestiary he was associated with castration, on the grounds of a false etymology: Latin castor looks like it should be connected to castrare, and the tradition was that the beaver’s testicles were much sought after as medicine. When threatened with death at the hands of the huntsman, the beaver bit off his own genitals and escaped.

When the Baron de Lahontan published the account of his travels in New France in 1703, he has happier tales to tell of the hard-working rodent.

He describes the dams which they make ‘much more artistically than men’.  The Indians (‘sauvages’) are convinced that their ‘esprit’, ‘capacite’ and ‘jugement’ show that they must have immortal souls.  (Various unflattering comparisons with Tartars,  Muscovites and Norwegians follow.)

They work through the night, using their tails as rudders, their teeth as axes, their paws as hands, and their feet as oars.

He also has a long section describing how the Indians hunt them. 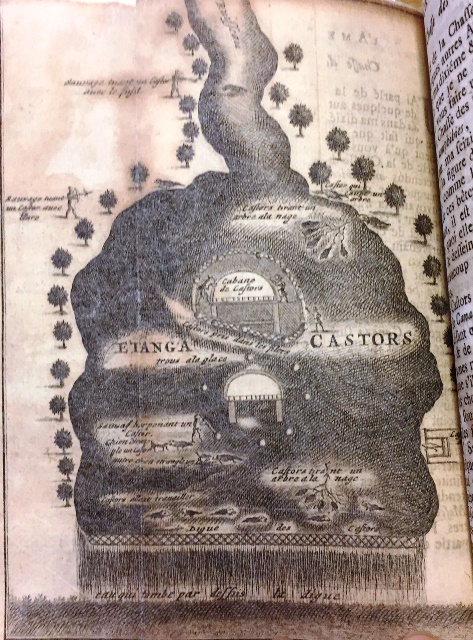 But the glory is this plate, where we see (anti-clockwise from top): savage hunting beaver with rifle, savage hunting beaver with bow and arrow,  beaver dragging a tree on water, the beaver’s dray, beaver caught in nets, beaver’s lake, holes in the ice, savages harpooning a beaver, dog choking a beaver,  another dog choking a beaver, beavers going to work, beavers’ dyke, beavers dragging a tree on water, beaver in a trap, beaver cutting down a tree.

Let the ingenious and dexterous beaver be an example to us all.

Posted by Mercedes Aguirre at 2:27 PM