In various light: a farewell to Derek Walcott

As a teenager I had the following stanzas from Derek Walcott’s poem In a Green Light on my bedroom door:

The orange tree, in various light,

That her last season’s summer height

Bends from each overburdened bough.

She has her winters and her spring,

Her moult of leaves, which in their fall

Reveal, as with each living thing,

Zones truer than the tropical.

And it is a strange feeling now to be writing this blog as Curator of Latin America and the Caribbean at the British Library in the sad wake of Walcott’s death on March 17th. Born in 1930 on the Caribbean island of St. Lucia, Walcott attended University in Jamaica and then moved to Trinidad where he founded the Trinidad Theatre Workshop in 1950. Walcott received the Nobel Prize in Literature in 1992. Walcott’s poetry, prose, and plays reckon with the colonial and post-colonial socio-historical forces of the Caribbean.  In his Nobel lecture The Antilles: Fragments of Epic Memory, Derek Walcott stated:

“Break a vase, and the love that reassembles the fragments is stronger than that love which took its symmetry for granted when it was whole. […] It is such a love that reassembles our African and Asiatic fragments, the cracked heirlooms whose restoration shows its white scars. […]Antillean art is this restoration of our shattered histories, our shards of vocabulary, our archipelago becoming a synonym for pieces broken off from the original continent.”

The British Library has a significant collection of Walcott’s works including a first edition of his very first play: Henri Christophe: A Chronicle in Seven Scenes (1950) (BL Shelfmark 11785.ee.23), that focuses on politics and power in post-Revolutionary Haiti. The play was first produced in London in 1952. 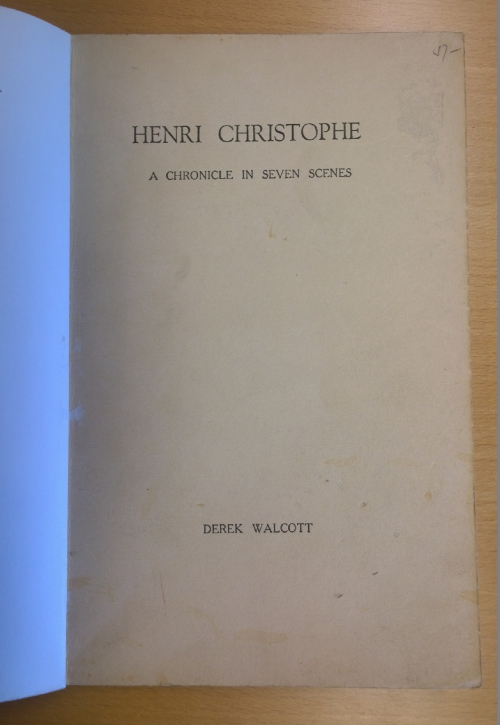 Walcott's epic poem Omeros (BL Shelfmark YC.1991.a.590), published in in 1990 , is a ground breaking work that weaves across time and space touching upon (among other things) classical Greece, the trans-atlantic slave trade, colonialism, cultural syncretism, love and death. The sound archive here at the British Library holds recordings of Walcott reading Omeros, as well as other works. And you will also find uncorrected proofs of Derek Walcott’s poetry such as In a Green Night (Add MS 88984/5/37/4) and many of Walcott’s plays such as The Odyssey (MPS 5344) in our manuscripts collections. A master at conveying the power of history and memory, Derek Walcott’s voice lives on shedding light on our human condition.

Posted by Elizabeth Cooper at 3:08 PM