To celebrate International Women’s Day we’re showcasing The Lowell Offering (1840-45), an extraordinary periodical that students from Royal Holloway asked to see when they attended a research training session here last week: and with good reason! In its short life this monthly periodical provided female textile workers in Lowell, Massachusetts – where women comprised 75% of the workforce – with a unique opportunity to see their poetry, ballads, songs, historical and religious essays or works of fiction in print. 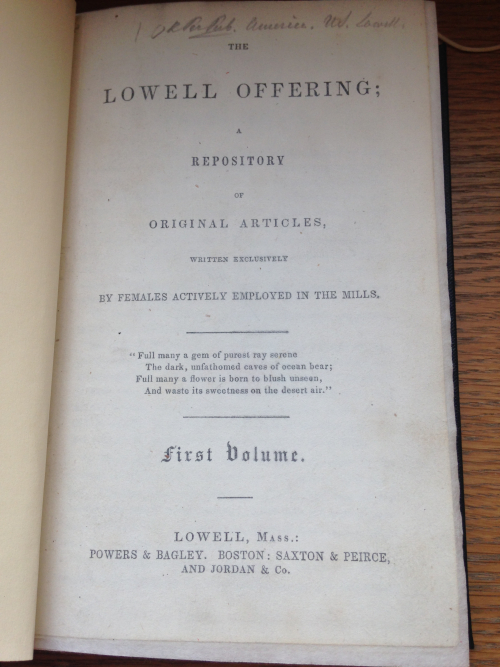 Perhaps surprisingly – given the ‘dark satanic mills’ of Victorian Britain – many women in New England initially regarded factory work as a well-paid alternative to teaching. The literacy rate amongst the operatives was high, and the creation of self-improvement societies was widespread; indeed, the Offering sprang from one such group. Writing about its origins, Harriet Farley – the Offering’s second editor – recalled that her group met fortnightly to read and listen to the written contributions of its members. Gradually the membership declined, yet the quality of the contributions kept improving and someone suggested compiling the contributions into ‘a little book’. This idea ‘was talked about in whispers’ but was soon supplanted by something even more audacious: a plan to publish a monthly periodical. Farley recalls:

We shall never forget our throb of pleasure when first we saw The Lowell Offering in a tangible form, with its bright yellow cover; nor our flutterings of delight as we perused its pages. True – we had seen or heard the articles before; but they seemed so much better in print. They appeared, to us, as good as any body’s writings. They sounded as if by people who never worked at all. The din and clatter of the mills had not confused the brains of the writers, and no cotton fuzz had obscured the brightness of their ideas… (The Lowell Offering, November 1842: shelfmark P.P.6242)

The Lowell Offering was funded through subscription and undoubtedly proved more successful than its contributors could ever have anticipated. In time, however, it was criticised both by mill-owners, who resented the way in which the women reflected (both directly and indirectly) upon life in the mills, as well as by reformers who believed it should take a far tougher stand against factory conditions. In 1845 it was discontinued, but two years later, Farley started The New England Offering – ‘Written by Females Who Are or Have Been Factory Operatives’ – which ran until 1850. 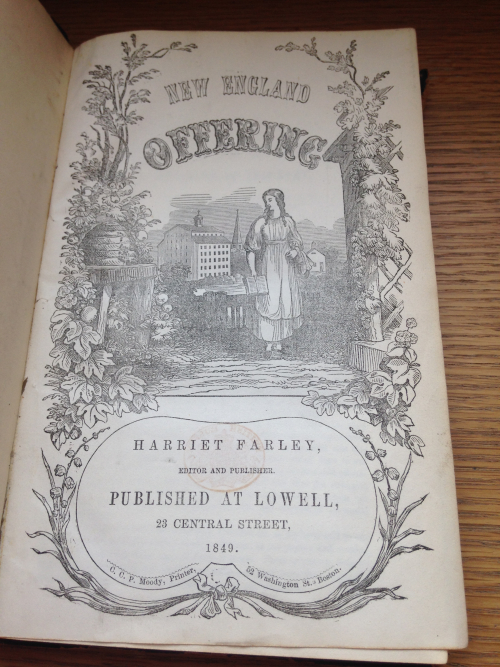 For nearly a decade, the Lowell and New England Offerings gave these women a singular creative outlet; for readers today, they provide a unique insight into the women’s inner and professional lives during a period of rapid industrialisation and social change.