Pocahontas and After in the Library's Catalogues

Next Saturday 18 March 2017, the British Library will be hosting a full day of events to commemorate the 400th anniversary of the death of Pocahontas.  The cultural day will be a reflection on the historical and cultural legacies of this notable Powhatan/Pamunkey Indian woman, and forms part of the wider activities of the ‘Pocahontas and After: historical culture and transatlantic encounters’ academic conference co-hosted by the Institute of Historical Research and the Eccles Centre for American Studies at the British Library.

Of course, Pocahontas has been extensively written about and studied over the course of the four centuries since her death and burial in Gravesend, Kent.  She also has a very strong visual presence in the archives, starting with the infamous 1616 Simon Van De Passe engraving made during her visit to England which was sponsored by the Virginia Company of London.  Her association with Virginia and Jamestown is a theme that reappears and was particularly prominent in 1907, the tri-centennial of the English settlement which was commemorated at the Jamestown Exposition.

The Library holds several items related to the Exposition that are of interest, and reveal how Pocahontas’ image, and that of Native Americans more widely, was appropriated at a time of resurgent nationalism that followed in the wake of the Spanish-American War.  While the Exposition was privately financed, it received support from the Federal Government, and included a very large naval and military display for which President Theodore Roosevelt delivered the opening address.  He also intervened directly with the Post Office Department, requesting that they produce the above specially commissioned stamps which you can see in the Library's Philatelic Collections.  The 2¢ stamp depicts the landing of the Virginia Company’s three ships, and is flanked by a tobacco plant and a stalk of corn (the former becoming a major commodity for the colony).  Both the 1¢ which shows Captain John Smith with smaller portraits of Pocahontas and her father Chief Powhatan on either side, and the 5¢ stamp of Pocahontas were based on Van De Passe engravings.  The latter was intended for visitors sending postcards internationally from the exposition, and shows how Pocahontas was continuing to be used as a global ambassador for the United States. 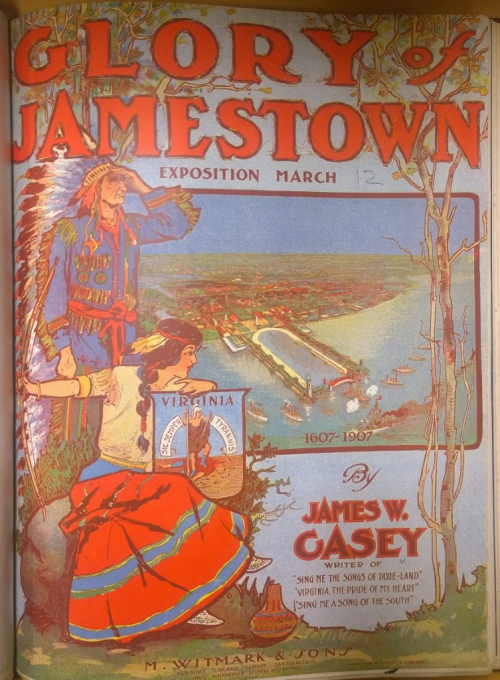 The cover of the score for Glory of Jamestown, the Exposition’s official march, depicts a generic Native American chief and woman, presumably a loose reference to Powhatan and Pocahontas, alongside an aerial view of the Exposition.  It is typical of images from the event, in that Native Americans are literally used as a framing device for the main image.[1]  It is not too much of a stretch of the imagination to identify the echoes of English colonial naval power  in the prominent display of imperial American power.

This collection also includes the scores for ‘Sing Me A Song of Dixie Land’, ‘Virginia, the Pride of My Heart’, and ‘Sing Me A Song of the South’, which point to another theme of the exposition: the South’s role in the national story.  Indeed, this opportunity to prominently parade the South's economic and business prowess on an international platform was one of the main drivers behind the Exposition as can be seen in The Old South and the New: a complete illustrated history of the Southern states from the earliest times to the Jamestown Exposition.  A richly illustrated book, it balances nostalgic reminicences of the 'Old South' with forward-looking anecdotes of the 'New South'. 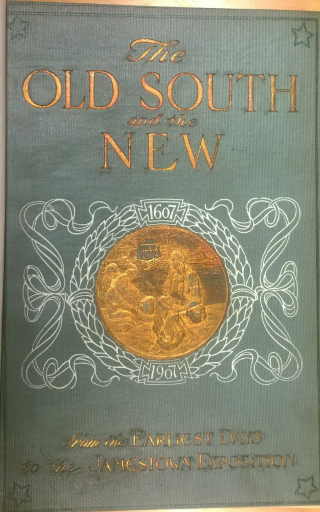 Last but by no means least, The London Company of Virginia: a brief account of its transactions in colonizing Virginia is a limited commemorative book published by the London Company for the Exposition.  It consists of a brief history and numerous portraits of individuals who were important in the founding of Jamestown.  These portraits were displayed at the Exposition and were reproduced here in photogravure.  Again, the importance of Van De Passe’s engraving in the imagining of Pocahontas is evident.  Her features are somewhat softened in this rendition, and she is given the contentious titular ‘Princess’.  The text accompanying the image clearly outlines the benefits the company reaped from Pocahontas, and the narrative that was created around her: “The sensation which was created by the visit of Pocahontas to London was not without its effect upon the Virginia colony.  New interest was awakened in this land beyond the seas which seemed to be personified in the graceful simplicity of the Indian maiden Pocahontas.” 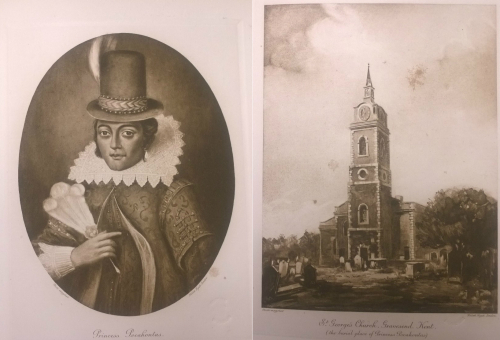 Perhaps the most poignant image in the book is that of Pocahontas’ burial site at St George’s Church, alongside the note that “Some Americans proposed that a memorial be erected at Gravesend, but, for some cause or other, the plan was never carried through.  Of late years, however, a rector of the church placed a marble there to the ‘Virginia lady born’ with a brief account of her services in saving the first Virginia colony.”  The 400th anniversary of her death thus provides a fitting moment to reflect on the multiple historic and continuing contemporary cultural appropriations of Pocahontas, her meaning for Native Americans today, but most of all to celebrate this notable woman.

Tickets for the cultural day are available on the British Library What's On page.

Registration for the academic conference is through the Institute of Historical Research website.

- F.D. Fuentes Rettig with thanks to Richard Morel