The currency of the United States is used globally in addition to being a national icon and international cultural symbol. Before the War of Independence (1775-1783) each of the thirteen colonies that eventually established the United States were under British colonial rule and all faced significant challenges regarding their monetary supply. During the seventeenth and eighteenth centuries various types of currency were used as a medium of exchange. The official coinage was denominated in pounds, shillings and pence, however as few British coins were available in America the colonies were compelled to rely upon foreign specie such as the Spanish Dollar that was much more freely available and explains why the United States eventually adopted the dollar. On occasion there was even a shortage of dollars, forcing colonies to occasionally use commodities like tobacco, beaver pelts and wampum beads as a medium of exchange. Finally, to tackle the shortage of currency the colonies also issued paper money.

Since each colony was a self-governing settlement whose administrators were answerable to the British Crown they each printed their own paper money. The first was the Province of Massachusetts Bay in 1690, four years prior to the establishment of the Bank of England, making it the first authorised paper money issued by any government in the western world. The remaining colonies soon followed suit and by the mid-eighteenth century each had developed a sophisticated paper monetary system. Known as bills of credit they were essentially fiat currency rather than notes which could be exchanged for gold and silver. Depreciation of such notes could and did occur which was harmful to British creditors, consequently the British Parliament passed a number of Currency Acts to restrict paper money issues to circumvent the problem. These Acts like the 1765 Stamp Act soured colonial relations with Britain laying the foundations for the War of Independence.  The British Library possesses five original notes, the earliest being a thirty shillings bill issued by the Colony of New Jersey on 16 April 1764 printed by James Parker depicted in images one and two. The obverse face of the note is bi-coloured being printed in red and black inks. It has a complex engraving of the Royal Coat of Arms whilst the lettering is in a variety of typefaces. Theoretically the registration of the two ink colours, varied scripts and complexity of the armorial engraving would require considerable skill, time and money making the notes unprofitable to counterfeit. Being a denomination insignia, the engraved half-sun on the note is another security feature. 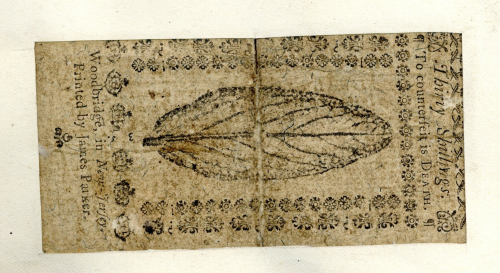 The design on the reverse face of the note is based upon a security feature invented by Benjamin Franklin for the 1737 New Jersey paper money issue. Franklin developed a method of printing from leaf casts via a copper plate press for transferring a sage leaf image onto the back of paper money bills. Since a leaf is a unique object it theoretically provided complex fingerprint for each bill which would be impossible to counterfeit accurately. The second note depicted in the collection is a ten pound bill issued by the Colony of New York on 16 February 1771 with manuscript signatures of Theophylact Bache, Walter Franklin and A. Lott in addition to a unique serial number. Printed in black ink on thin laid paper by Hugh Gaine, the ornamental upper border and arms of New York depicted on the obverse face were actually engraved by Elisha Gallaudet. Like other notes in the collection there is a verbal warning “Tis death to counterfeit.” Curiously, following a spate of forgeries in 1773 the Colonial Authorities authorised that images of the counterfeiters hanging from the gallows could be pasted onto the reverse face of the notes to discourage forgers but this was never carried out. 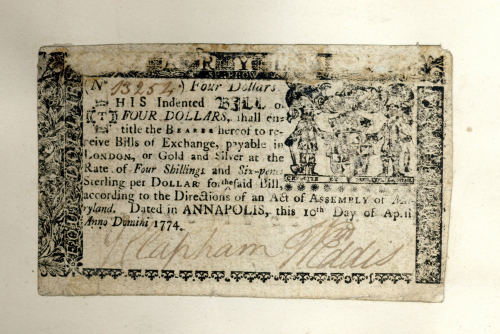 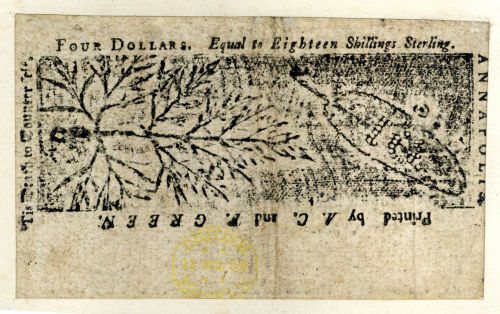 The third note is a four dollar bill issued by the colony of Maryland on 10 April 1764 with manuscript signatures of John Clapham and William Eddis with a unique serial number. Information on designers, engravers and printing of paper money is sporadic at the best of times. However since this note is known to have been printed by Anne Catherine Green and Frederick Green it offer a rare glimpse of the role women played in the Security Printing Industry. Finally as an alternative to watermarked paper this bill was printed on thin paper containing mica flakes to help prevent forgery.

This two shillings six pence bill issued by the colony of Pennsylvania on 3 April 1772 possesses the manuscript signatures of Adam Hubley, Joel Evans and John Mifflin in addition to a unique serial number. It was once again printed by Hall and Sellers in black ink bearing the arms of the Penn Family on special security paper which contains blue thread and mica flakes. Some of these bills bearing this date can contain the signature of John Morton, a signer of the Declaration of Independence. 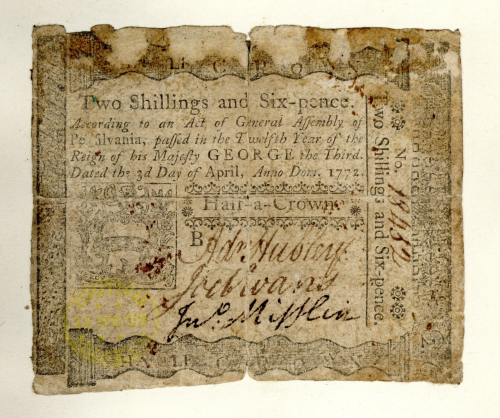 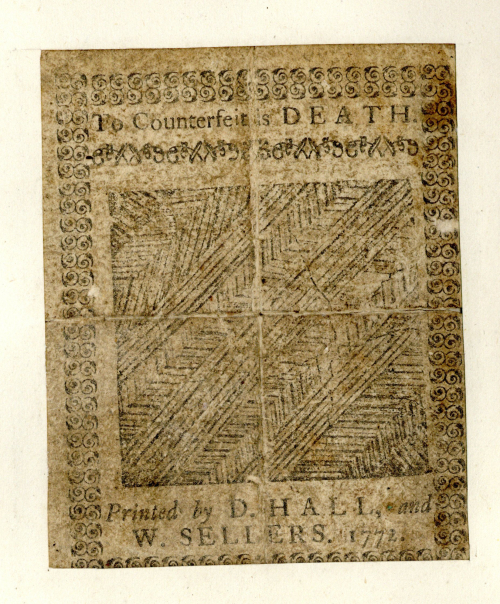 The final bill is a twenty shillings note issued in Delaware on 1st January 1776 signed in manuscript by John McKinly and Boaz Manlove with a unique serial number. The note was printed in black ink by James Adams who had once worked alongside Benjamin Franklin in Philadelphia 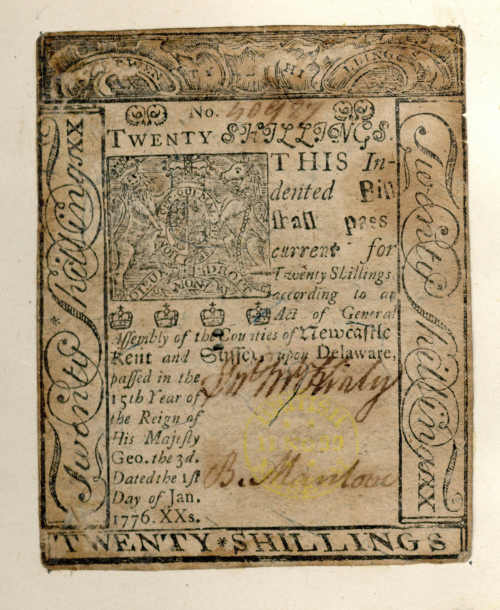 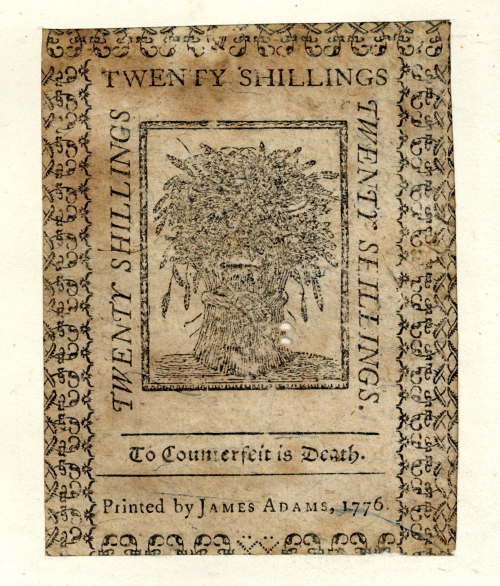 Comparison of these notes to contemporary ones issued by Bank of England in Britain shows they are arguably more accomplished in terms of their complex engraving, letterings, use of coloured inks and range of security features. Although less iconic than the modern currency they do display the technical brilliance which helped develop the United States into the world’s leading economic power and banknote printers.

Farley Grubb: Benjamin Franklin and the birth of a paper money economy (Reserve Bank of Philadelphia, 2006)

Images are taken a volume containing a collection of paper money (The British Library, c. 143.d.5)

Posted by Mercedes Aguirre at 12:19 PM