Australasia in the Americas blog

The Americas blog is delighted to host the first of series of posts on our Australian collections by Joanne Pilcher, who is currently carrying out a PhD placement project at the British Library, exploring contemporary publishing in Australia. If you would like to know more about placement opportunities at the Library for doctoral students please click here.

I am in the second year of my PhD in the School of Architecture and Design at University of Brighton. My research is into textile design and printing conducted by Aboriginal Australians in the Northern Territory from 1988 to present.[1] Some Aboriginal art centres have been producing printed or woven textile designs since the 1940s, yet these textiles are often overshadowed by the more widely publicised (and stereotyped by outsiders) Western Desert Style paintings by Aboriginal artists. I am interested in how textile design and production provides a different opportunity for exploration of culture and identity in comparison to the paintings; this is particularly interesting in relation to how the textiles are increasingly turned into clothing. Clothing is often the first signifier of an individual’s identity. As Aboriginal textiles increasingly become wearable expressions of identity accessible to all races and nationalities, I am interested to learn how (or if) this sharing of visual culture can provide the designers with agency either through monetary gain, growing cultural awareness or political representation. This is important as there is still a significant gap in wealth and political representation between Aboriginal and Torres Strait Islander Australians verses settler Australians. 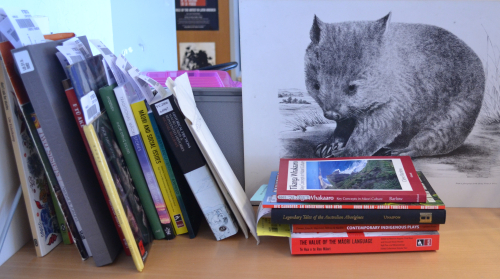 It is with this background that I have approached my three month placement at the British Library. As with most PhD projects, my work is rather specific in that is only discusses textile design and only in relation to Aboriginal groups in one specific area of Australia. This placement has provided me with the opportunity to ‘widen my horizon’ and engage with the cultural outputs and representations of knowledges of Aboriginal and Torres Strait Islander groups across Australia. Generally, I have been surprised at how comprehensive the British Library’s collection on Indigenous Australian writing is. I have learnt about an array of talented Indigenous Australian novelists, playwrights and poets, such as Andrea James, Daisy Utemorrah and Oodgeroo Noonuccal.[2] I have also learnt a lot about the challenges of collecting and writing about Aboriginal and Torres Strait Islander knowledges, a topic I hope to write about in a future blog post. I am now constantly on the look out for exciting new publications in this field that I can add to my growing list of suggestions of books for the library to collect. I am particularly interested in activist or grass roots publications such as zines that relate to current discussions on Constitutional Recognition of Aboriginal and Torres Strait Islander groups in Australian politics.[3]

As a non-Indigenous dual nationality British/Australian scholar, I have taken the role as an ‘informed outsider’ in both my PhD research and the British Library placement. In my PhD work I hope to use oral history interviews in order to put the voices and experiences of Aboriginal Australian textile designers and printers at the centre of my research. I have reflected upon this during the British Library placement where I have focused on written material created by, or in collaboration with, Aboriginal, Torres Strait Islander and Maori people of Australia and New Zealand. I have paid most attention to attempts to share cultures and histories with a wider audience; one area I have been particularly interested in is children’s stories and comic books as they provide visually stimulating texts that can be widely disseminated. From the 1980s onwards, there have been quite a few Aboriginal comic book characters but, as Luke Pearson outlines in his article for Indigenous X, ‘very few [characters] have been designed by Aboriginal artists, or written by Aboriginal authors.’ Some of these are represented in the British Library collections, such as the Reg Saunders comic by Hugh Donlan and Adrian Threlfal which depicts the true story of the Indigenous war hero Reg Saunders.[4] I hope to compliment this existing collection with other comics, such as the newly released Cleverman comic which accompanies the television series of the same name by Ryan Griffen who created it so his son could have Aboriginal super heroes to look up to.

After spending four weeks of the placement looking at the Australian collections, I have now turned my attention to the New Zealand collections. This is a new area of research for me and I am excited to learn more about postcolonial politics and culture within Māori groups in New Zealand. I will be interested to compare how the representations of the Indigenous groups of Australia and New Zealand differ in a contemporary context. I welcome any feedback and advice on this project, please feel free to tweet me: @JoannePilcher1 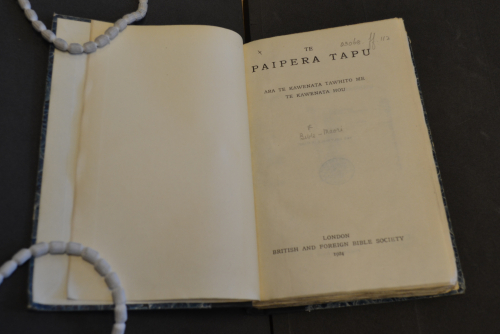 All of the works I have been looking at are available on the British Library  Explore Catalogue.

I would like to thank the Arts and Humanities Research Council, Design Star Student Development Fund whose financial support has enabled me to undertake this placement. 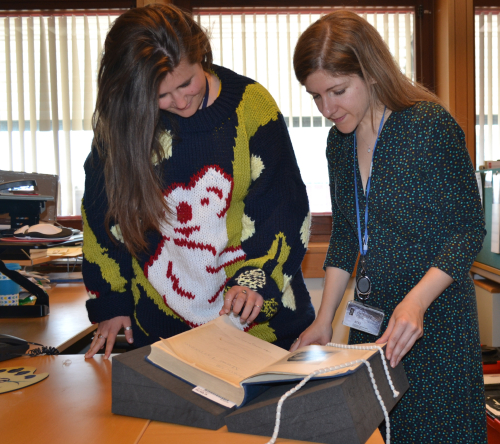 [3] This article from the Guardian’s Indigenous Australians blog gives some of the context behind recognition. https://www.theguardian.com/australia-news/2017/may/25/constitutional-recognition-and-why-the-uluru-talks-matter-explainer

Posted by Mercedes Aguirre at 1:56 PM