Since when and why

In a little time I felt something alive moving on my left leg, which advancing gently forward over my breast, came almost up to my chin; when, bending my eyes downwards as much as I could, I perceived it to be a human creature not six inches high, with a bow and arrow in his hands, and quiver at his back… [1]. 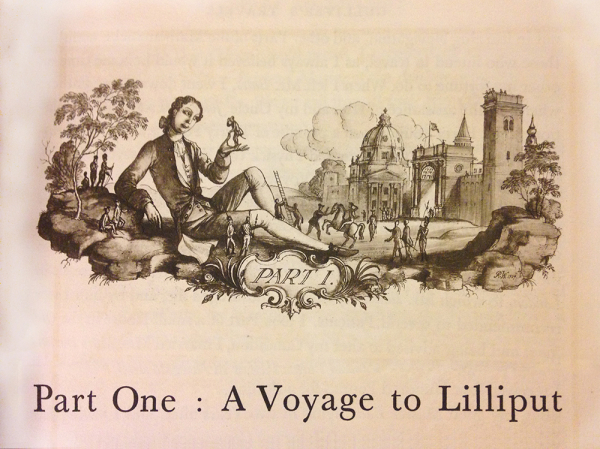 I like to report on my first encounter with the miniature books world as a moment that was like waking up from my ordinary library day of submersion in beautiful American artists’ books, and discovering an exciting alternative reality made of miniature items. I perceived that these objects almost animated, approximately three or four inches tall, kindly throwing darts of curiosity at me with their bows loaded with charm. I immediately fell enamoured with them, and it did not take long before my desk was busy with library materials on miniature books.

“For those of us who have been bitten by this particular bug” [2] there is nothing left to follow the appeal of the beauty offered by the small miniature art masterpieces. 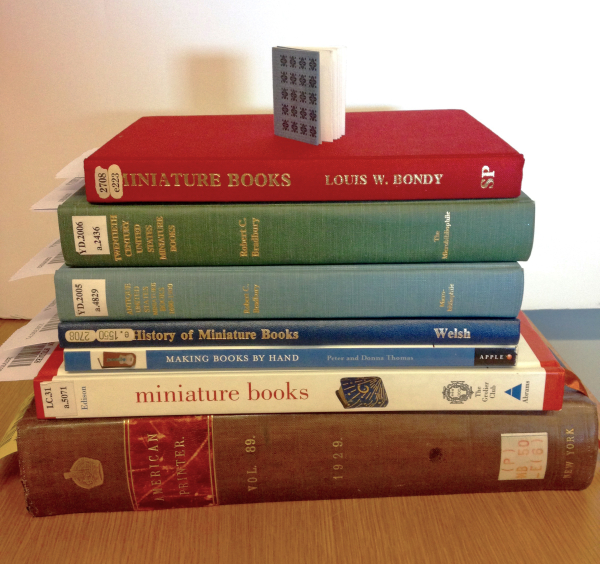 Some of the books consulted for my research, and on top the little: A dog’s tail, printed by Anicka and Gaylor Schanilec, (United States: Midnight Paper Sales & Flaming Cat Press, 2004), measures 1 1/2” x 1 1/8” [in cataloguing process]

Wondering ‘why’, and ‘since when’ have been the guideline of my innocent journey into the history of the little items. One of the first things I learned is that as old as the discovering of the written world is its counterpart in the miniature form. Secondly, I acknowledged that this world is regulated by laws, and for that, you will define as miniature books only those which respect the standard of being possibly even less than three inches but no more than four, and almost as it was heresy, five.

Defecting from the established rules in fact, an item of four inches or little more would only be a pain for a purist, and a joke for all artisans involved, printers, binders, papermakers, illustrators, illuminators, and engravers who would give all the very best of their art under more challenging and extreme circumstances from one to three inches.

It is said that to reach the completion of the 1878 Dante’s Divina Commedia edition (Padua: Salmin), also known as the “Dantino”, many artisans were injured: the necessary operations of preparing and cutting the types caused a serious injury “to the eyesight of both the compositor and corrector. It took one month to print thirty pages, and new types were necessary for every new form.”. Around the 70’s of the 19th century, two brothers from Padua, Italy, together with a small team of professionals such as casters, compositors, and correctors, developed an unprecedented minuscule typefaces, which they named carattere a occhio di mosca (fly’s eye type), and that was firstly used for the micro Dante’s masterpiece. The measures of the book are 1 1/4” x 1 3/4”, and it is only readable trough a magnifying glass [3]. 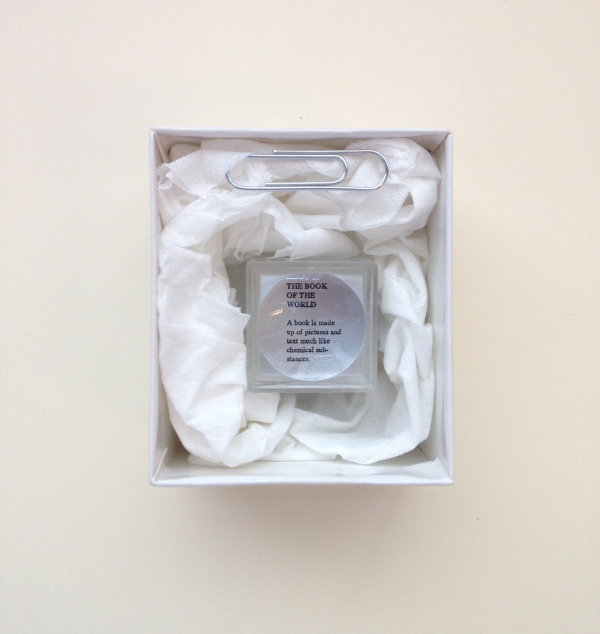 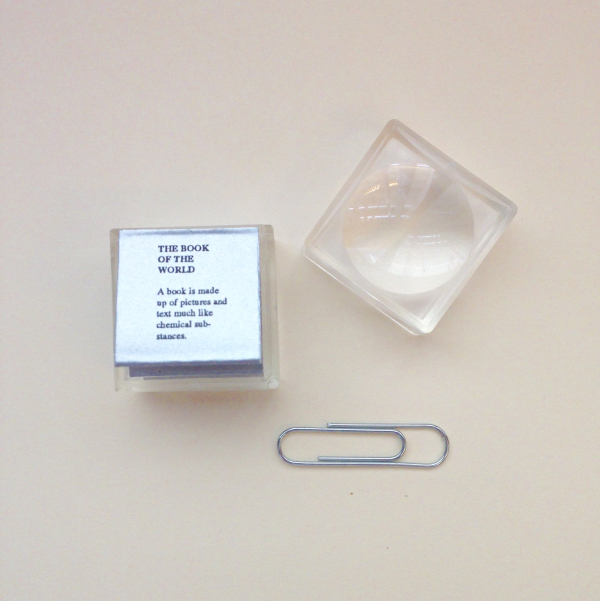 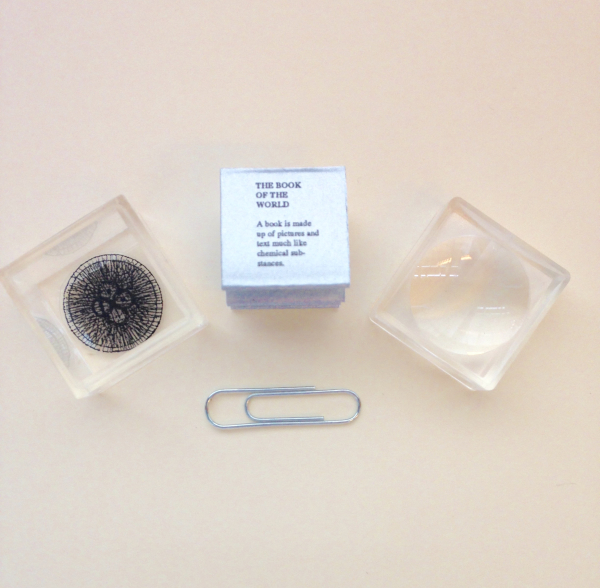 The book of the world, by Irene Chan (Baltimore?: Ch'An Press, 2000), measures 1” x 1” (box). The text of this miniature book consists of an excerpt of John Dalton's 1808 Atomic Theory. The illustration is an image of Dalton's elastic fluids drawing that looks like the eye [Cup.550.g.739]

Indulging in more technical details, you would call a miniature book a 64mo. A single leaf of paper folded 64 times, originally printed with 64 pages on each side of it, and then scrupulously folded in order to bring up the correct sequence of the pages. The size of the pages are obviously determined by the size of the original master sheet, but a 64mo would inevitable be around 3 to 5 inches [4].

The purpose of creating, producing and collecting miniature books is two-fold: firstly, the practicality and secondly, personal pleasure, and the sense of beauty in small objects. Before Gutenberg, for matters European, miniature manuscripts were periodically produced completed with illuminations. Subsequently, the production of miniature books has continued to reflect the latest progresses of print machines and processes. There were miniature books printed in early Gothic and incunabula type characters, or in the earliest Greek types, Hebrew and so on. As in a shrinking mirror they were reflecting all new type acquisitions and binding progress [5].

Little books were simultaneously produced in the centuries alongside regular standard, so that men and women of faith could easily bring with them their collection of psalms and devotional books, students could carry their small library in a pocket, smugglers of ideas could easily hide tiny booklets in a secret bottom of their cape, merchants could quickly retrieve from their belt a tiny but complete guide on the equivalence of grains prices, scales, measures and conversion, and foreign currencies value meanwhile closing a deal, or that sharp businessmen could brilliantly define a legal contract.

It has been for that purpose that some of the earliest examples of books on miniature support were produced during the Babylonian Empire, as for the case of two small cuneiform tablets of Ancient Mesopotamia which preserve an antique writing system and concern trade and administrative issues. One of them, a clay tablet dated back to the 7th year of the reign of Bur-Sin, circa 2325 B.C., comes from the region of Ur, today Iraq, and measure only 1 5/8” x 1 1/2”. It contains extremely useful information while dealing with barley and bran for sheep (1), and the other, a Babylonian clay tablet from Senkereh, now Iraq, is dated 2200 B.C., and measure 1 7/8” x 1 1/4”, it was also used in the trading of animals and provisions (2). 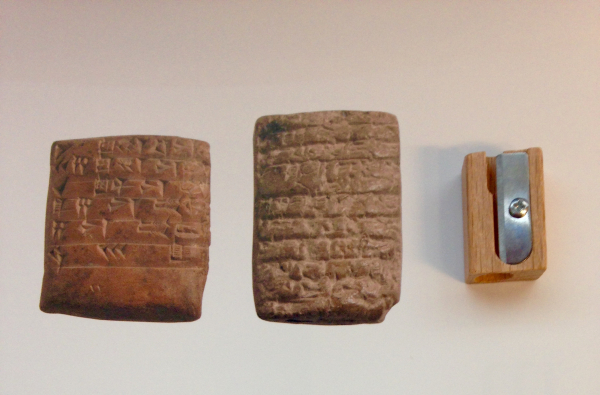 Another beautiful miniature object is the world’s first printing on paper. A very tiny scroll 23/8” tall obtained from wood blocks, is dated back to 770 A. D. and is well known as the D’harani prayer. Only the story of its origins is as enchanting as the scroll itself. With the aim of spreading awareness on Buddhism, the Japanese Empress Shotoku, gave order to print a million copy of these prayer-scrolls encased in charming wooden pagodas, then asked they be distributed all over the country divided among ten Japanese temples, a project which required over six years of continuous work [6]. 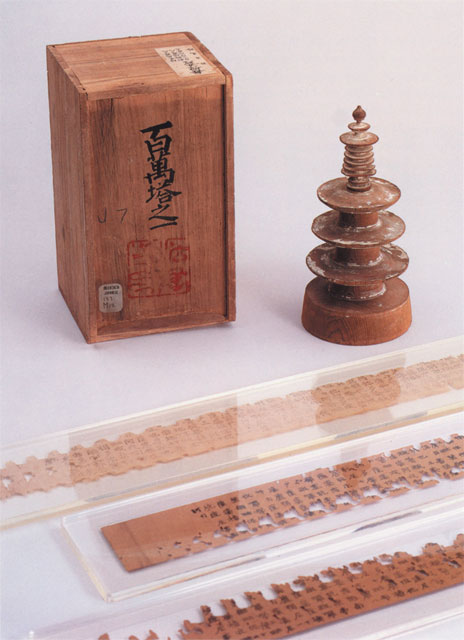 Annalisa Ricciardi is currently working as Cataloguer of the American Studies Collections. She is working on a heterogeneous collection of extraordinary interest and artistic value of American fine press and artists’ books, such as limited, numbered, and rare editions chronologically placed between 18th and 21st century.

Posted by Annalisa Ricciardi at 9:53 AM