George Pilkington and abolitionism in Brazil

George Pilkington’s An Address to the English Residents of the Brazilian Empire was published in 1841 at the culmination of the author’s fact-finding mission on behalf of the British and Foreign Anti-Slavery Society. The pamphlet outlines the Irish abolitionist’s grave concerns about what he had witnessed during visits to the Brazilian provinces of Pernambuco, Minas Gerais and Rio de Janeiro. Not only was he horrified by the cruelties of the illegal slave-trade which continued to flourish, despite British pressure, until 1850; Pilkington was also appalled by the complicity of British residents in Brazil in promoting the contraband trade and its corollary, slavery. 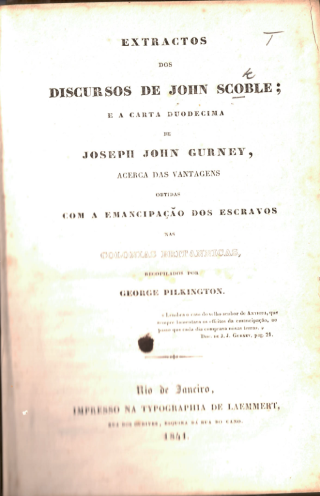 Pilkington vehemently believed that given Britain’s global stand against the slave-trade since 1807 and slavery since 1833, the interests of British slaveholders in Brazil were ‘in direct opposition to English principle.’ The Address, then, was an impassioned plea to all British residents who had ‘breathed the miasma of slavery’ to act promptly to extricate themselves from the precarious moral and, as he saw it, legal position in which they found themselves.[1]

This pamphlet and a series of related letters authored by Pilkington in the same period are important sources for my own research exploring the entanglement of British commercial interests with slavery in Brazil until its abolition in 1888.[2] While there have been some excellent studies concerning the gold mines of Minas Gerais, other areas of British investment in Brazil’s slave economy remain relatively unexplored.[3] Pilkington’s own estimations from 1841 that half of all British-held slaves were employed in non-mining contexts encouraged me to investigate further.[4]

Through archival research across Brazil and the UK, I have been able to quantify the extent and map the diversity of slaveholding in the small but affluent British communities from Pará in the north to Rio Grande do Sul in the south. The picture that emerges - at the mid-century at least - is one of slave-ownership across all levels of the community, from bakers and stable-keepers to the well-to-do merchant class and even a significant minority of large-scale plantation owners, including Britain’s own Vice-Consul in the province of São Paulo. The ‘English principle’ which Pilkington stressed, or Victorian Britain’s anti-slavery identity, was seemingly not the primary concern of those British subjects faced with the both the realities of living in a slave-society and the opportunities for profit-making in a slave-economy.

These traditional forms of slaveholding are only part of the story. Other chapters of my research project focus on the kind of entanglement which appeared less readily in abolitionist critiques of British complicity in Brazilian slavery. Using overlooked sources of the British in Brazil, such as legal and notary records, my research has traced the flows of British credit to slave-owners in the form of mortgages guaranteed by human collateral. Whilst not challenging the predominance of native capital in the expansion of Brazilian slavery, British actors were important sources of international credit and it has been possible to trace flows which had until now remained largely invisible. For example, one of my chapters studies the establishment of the London and Brazilian Bank and its mortgage portfolio containing many hundreds of enslaved people and the São Paulo coffee plantations they worked.

Britain’s relationship with slavery did not end with abolition in its own colonies. Recent scholarship such as UCL’s Legacy of British Slave-Ownership project has shown that to be the case. British entanglement with Brazilian slavery is part of the same conversation and I hope that my research can contribute to helping us understand more about this complex and challenging legacy.

Joe Mulhern is a current PhD candidate on a CDP at the University of Durham and the British Library, where he is supervised by Dr. Elizabeth Cooper, Curator for Latin America and the Caribbean.