The British Library has an outstanding collection of scientific literature, and the richness of its early American scientific material is illuminated in the Eccles Centre’s Early American Science: A Selective Guide to Materials at the British Library by Jean Petrovic. The books, journals, papers and letters of all of the leading figures are listed here. And while Benjamin Rush, ‘Father of American Psychiatry’, will be the subject of next month’s blog, this first one must surely focus upon Benjamin Franklin.

For Franklin and others like him, scientific investigation was a central part of eighteenth century philosophical enquiry; indeed, the generic term for scientists at this time was ‘natural philosophers’. That the American Declaration of Independence was based on 'natural law', rather than divine sanction, stemmed from preceding century's increasing reluctance to define natural phenomena as purely 'Acts of God'. 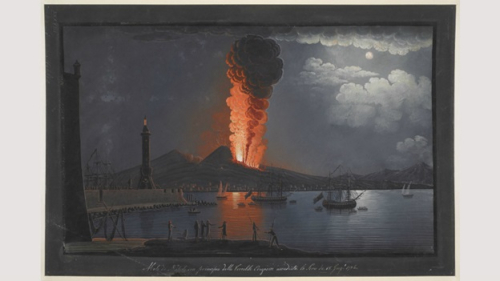 Initially, the natural philosophers living in the American colonies worked collaboratively on a local and inter-colonial basis. Yet as the eighteenth century progressed they increasingly communicated with fellow spirits in Britain and Continental Europe.

From the mid-century onward, Franklin was at the centre of this exchange of information. In 1753 he won the Royal Society’s Copley Medal – the 18th century equivalent of the Nobel Prize – for his ground-breaking work in the field of electricity. This he had communicated by letter to Peter Collinson, a Fellow of the Royal Society, who subsequently arranged for its publication as Experiments and Observations on Electricity (London, 1751; shelfmark: 538.l.5.(6)) 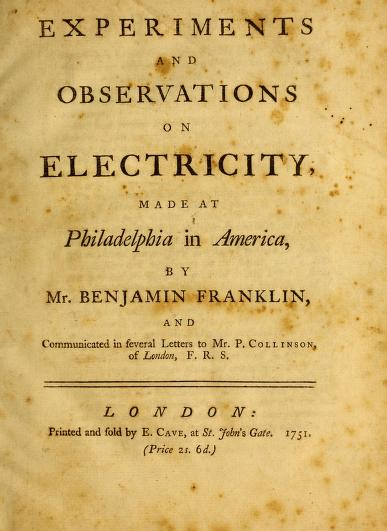 The book established Franklin’s reputation in Britain and Europe, with Immanuel Kant in 1755 describing him as ‘The Prometheus of Modern Times’. Thus, when Franklin arrived in London in 1757, ostensibly as a political representative, this supposedly unfashionable colonial found immediate acceptance at the centre of Britain’s scientific community. As he expanded his own network, he increased the international acceptance of his American contemporaries. Even the American War of Independence did not totally disrupt transatlantic communication. In 1779, Franklin, as the United States Minister Plenipotentiary in France, instructed ‘All Captains and Commanders of American Armed Ships’ to grant Captain Cook a safe passage in 1779 for his voyage of exploration ‘for the Increase of Geographical Knowledge’. [1] 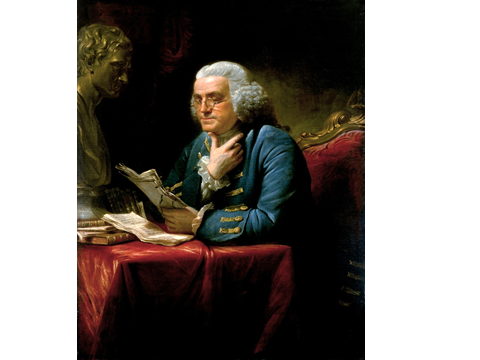 The extraordinary number and depth of Franklin’s connections can be traced by linking the correspondence in The Papers of Benjamin Franklin (New Haven: Yale University Press, 1959- ) to the publications of his American contemporaries in Early American Science. In so doing, we see how Franklin is associated with the biologist Cotton Mather from his Boston boyhood and linked to a great number of his fellow Philadelphian scientists, including the botanist John Bartram, physician Thomas Bond, scientific patron James Logan, astronomer David Rittenhouse, physician Benjamin Rush (the subject of next month's blog) and collector Charles Willson Peale. Franklin was also a long-time correspondent of two highly distinguished academics – the Yale climatologist Ezra Stiles and John Winthrop, Professor of Mathematics and Natural and Experimental Philosophy at Harvard.

The final Franklin/British Library connection highlighted in Early American Science is the Library's holdings of almost two hundred and fifty years of the Transactions (1771 - ) of the American Philosophical Society - the organisation founded by Benjamin Franklin in 1743 and modeled on the Royal Society. [2]

George is a 2017 Eccles Makin Fellow at the British Library and author of Benjamin Franklin in London: The British Life of America's Founding Father. London: Weidenfeld & Nicolson, 2016. (shelfmark: YD.2016.a.3841).