The barber shop is a curious phenomenon, a masculine space which seems to transcend boundaries of typical service provision. The African-Caribbean barber shop appears to represent an even more varied intersection of use, activity and meaning. Going through copies of Flamingo in preparation for the upcoming Windrush exhibition at the British Library, I came across a short story by Winston Whyte.

Edited by Edward Scobie, the first issue of this vibrant but short-lived journal was published in September 1961; unfortunately, its final issue was published just two years later, in November 1963. Britain’s longstanding African-Caribbean communities saw a sharp growth from the late 1940s to the early 1960s, many were part of the so-called ‘Windrush Generation’, hence Flamingo was envisioned as a ‘voice’ for the ‘350,000 West Indians and many thousands of Africans and Asians’ that lived in Britain.[1] In a short story segment each month, Flamingo would publish Caribbean or West African authors. This included the work of unpublished writers, such as Winston Whyte, but also famous authors, notably Samuel Selvon[2]. These stories were complimented with comical illustrations drawn by Dave Robinson. 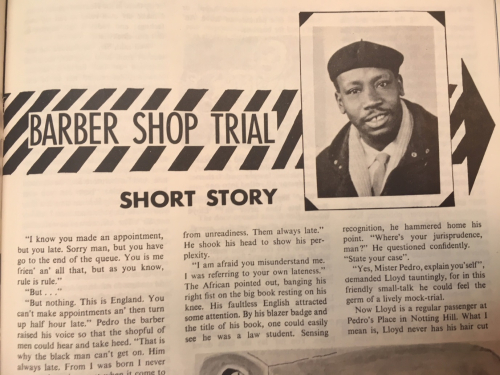 Set in Pedro’s barber shop in Notting Hill, the ‘Barber Shop Trial’ constructs the complex and lively world of this imagined but authentic space, part of what Whyte calls ‘Barber Shop Society’. The sentiment conjured up in Winston Whyte’s story, which was published over fifty-years ago, is more than a historical phenomenon, as evidenced by Inua Ellams’ play, ‘Barber Shop Chronicles’ which is currently showing at the National Theatre. 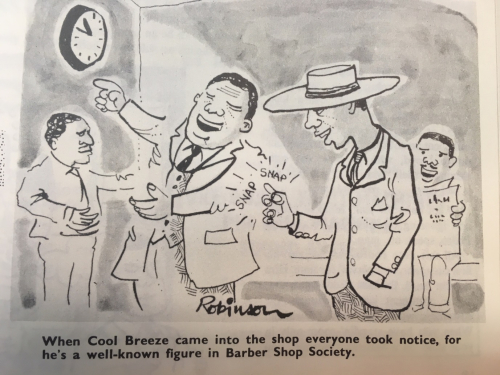 The narrator explains how ‘this is a scene poles apart from the English Barber Shop where conversation is limited to “Good Morning Sir. Your turn Sir. How would you like it Sir?” A world away from this, at Pedro’s, they were always ‘talkin’ ‘bout something. It could be ‘bout conditions at home, colour prejudice in Britain, women, politics or any other subject under the sun’. Although set in an imagined barber shop, one can assume that Pedro’s was based on numerous real barber shops, like those advertised in Flamingo.

Speaking in general, the narrator asserts that ‘any good Jamaican barber is philosopher, preacher, politician, lawyer, father-confessor, comedian and family guidance councillor all rolled in one’. It is the intersection between the social, political, domestic and material which has led to the African-Caribbean barber shop becoming such an important and layered symbol and space. The often-ironic use of the barber shop is evidenced by the fact that Lloyd, the West Indian regular at Pedro’s, never actually got his hair cut there. 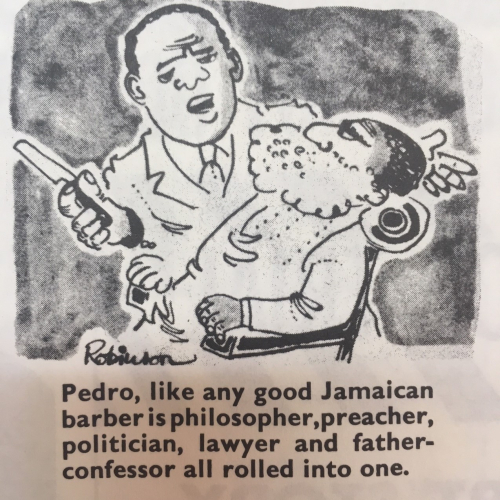 Although the ‘Barber Shop Trial’ evokes a sense of unity and comfort, competition and division were also rife at Pedro’s. Using the format of a legal trial, Whyte tells the story of a heated debate between Pedro (the barber), Lloyd (his regular West Indian customer) and ‘the African’ (a ‘well-spoken’ barrister). Through a dispute about Lloyd and Pedro’s lateness, alongside accentuated linguistic and occupational differences, this story explores and solidifies boundaries of Africa and the Caribbean. Pedro, Lloyd and the other customers speak in dialect, this is set in contrast to ‘the African’s faultless English’. This reflects the tensions, as often invoked through stereotyping, that existed between Britain’s diverse black communities.

So, when you’re next deciding where to get your haircut remember that ‘Good humour an’ judgement mean good haircuts.’

Naomi Oppenheim is a PhD candidate on a CDP at the British Library and UCL. She is currently researching British-Caribbean popular culture and the politics of history in the post-war period.

Posted by Elizabeth Cooper at 11:30 AM