Buried in Andrew Salkey’s personal archive amongst a file of scripts, forms, notes and letters, is an unpublished Christmas poem. Andrew Salkey, co-founder of the Caribbean Artists Movement, was a prolific writer-come-activist who made frequent contributions to the BBC. Nestled in a box, which contains his work with the BBC on programmes such as Calling the West Indies (which later became Calling the Caribbean), Caribbean Voices and the Caribbean Literary Magazine, was a typed copy of ‘Mento Theme No. 6’. Salkey described this as a ‘A poem on Christmas influenced by the Jamaican Dialect’. More specifically, it was in a folder that was particularly heavy with BBC rejection letters with returned poems attached that I discovered ‘Mento No. 6’.

Unable to ‘find any room’ in the BBC ‘First Reading’ radio programme for Salkey’s poem in 1953, the British Library America’s blog has found room for this poem’s much-delayed entry into the public sphere, sixty-four years later. 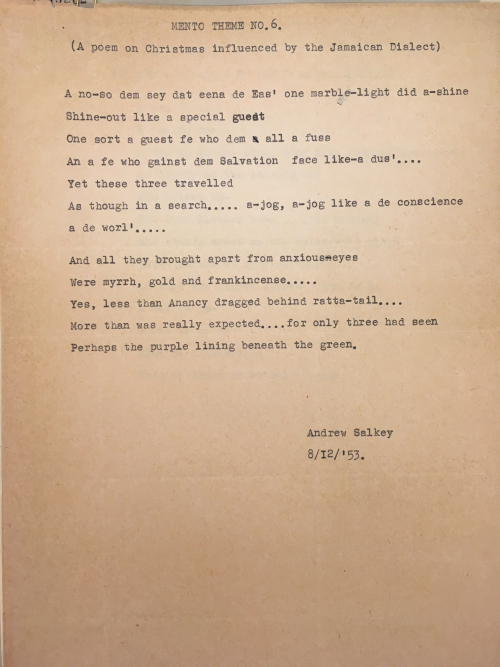 Salkey’s poem reads as a creolised Christmas story, in which recognisable Christmas motifs and tales are recounted in patois, to a Mento tune and rhythm. Sometimes called the grandfather of reggae, Mento is a type of Jamaican folk music which fuses African and European musical traditions. The knowable tale of the star in the East which led the Three Wise Old Men, who brought ‘myrrh, gold and frankincense’, is followed (in true Salkey-style) by a mention of Anancy the Spider. Although not a traditional or known part of the Christmas story, Anancy is both known and traditional within the Black diaspora. A cunning folk trickster who travelled from West Africa, across the middle passage, to the New World, and later from the Caribbean to Britain, Anancy is a powerful and historic figure.

Salkey played a critical role in keeping the trope of Anancy alive, as demonstrated through his literary work which can be found at the library. Amongst a vast array of his work held in the British Library Collections, Anancy, Brother Anancy and Other Stories and his readings for the African Writer’s Club, which can be found on the British Library Sound webpage, are just a taste of Salkey’s contributions to West African and Caribbean folk revival.

This poem is a Mento through more than its rhythm and sound, it is a mento through the way it melds African and European cultural traditions.

Have a Merry Mento Christmas…..x

Naomi is a PhD candidate on a CDP at the British Library and UCL. She is currently researching British-Caribbean popular culture and the politics of history in the post-war period.

Posted by Elizabeth Cooper at 4:45 PM