On 16 November the Canada-UK Council visited the British Library with delegates taking part in the Dilemmas of Democracy conference that was held at Runnymede.  The North American curators had prepared a ‘Show and Tell” with a particular focus on the 150th Anniversary of the passage of the 1867 British North America Act which had established the Dominion of Canada.

The material reflected on relations pre and post confederation, including this beautifully illustrated work containing a painting of the Canada stand at the Great Exhibition of 1851.  Also displayed was Portraits of British North Americans, a collection of biographies illustrated by William Notman's photographic portraits; 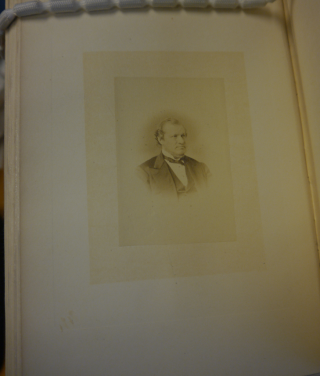 Finally, an interesting work which makes the case for financing a Canadian Pacific railway, an issue that was closely tied to confederation. 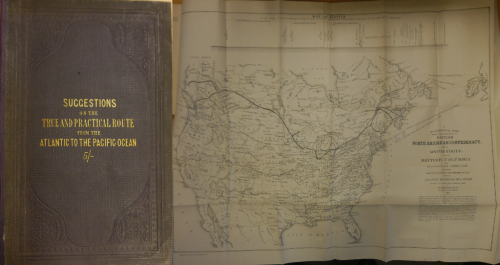 The Confederation of the British North American Provinces; their past history and future prospects... Shelfmark 10410.dd.13.

The delegates were given a short presentation on one of the books on display: a History of Canada 1849-59, by Alexander Tilloch Galt, which was published in London in 1860.  The book was of particular interest because Galt (who was one of the Fathers of Confederation a few years later) was the Minister of Finance in the coalition government of Upper and Lower Canada at the time. The book can be understood as a Prospectus to persuade influential Britons – and notably financiers – that Canada represented a safe long-term investment. Galt had a personal as well as a political interest in conveying this message, as it was over this period that he was amassing a considerable fortune in the Grand Trunk railroad. It was important to keep the money flowing! 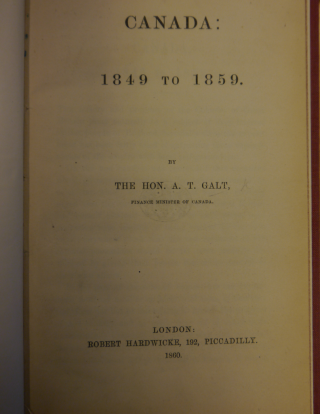 Galt starts out by confirming (what few in England perhaps understood at that time) that Canada was already essentially independent.  In 1846 Lord John Russell, as Prime Minister, had admitted the principle of responsible government in Canada.  A new system had been inaugurated, and: “…as from that date no attempt has ever been made to interfere with its free and legitimate operation. The political differences and difficulties of Canada have been dealt with by her own people and legislature, and Great Britain has never been required to take part in any local question whatever” (except to give effect to the express desire of the Provincial legislature).

Canada had started the decade of 1850-60 with a “ravaged exchequer”, still recovering from the violent uprisings of 1837-8. But – says Galt – it had stopped asking for, and did not expect, help.

He sketches, first, the institutional machinery of democracy that had already been put in place. Membership of the Lower House had grown from 84 to 130 in 1853, and the voting franchise had been extended to $30 pa (roughly £6) in towns, and $20 pa (or £4) in rural areas.  Elections had been introduced for the Upper House, which consisted of a single member from each of 48 districts.

He notes Queen Victoria’s 1857 choice of Ottawa as Canada’s capital, and records that “public buildings are now in course of erection” – but gives no hint of the controversy surrounding this choice which had already caused one Government to fall, and which rumbled on for a full decade.

He outlines the system of municipal government  that had been introduced in both Upper and Lower Canada in 1849/50 and that had now been consolidated into a single Statute, securing powers  “to levy local rates for local objects” and giving each district “the most perfect control of its own affairs”. In Lower Canada (modern Quebec), he observes, an earlier attempt had been made to introduce a system shortly after the 1837/38 rebellion, “but with the exception of several English counties, the effort proved a complete failure”!

The History goes on to enumerate the progress achieved in education, where a new system had been introduced in 1846 following an examination of European models. By 1858 there were 3,866 schools in Upper Canada, with 293,683 scholars, and 2,800 schools in Lower Canada, with 130,940 scholars. (One of the pleasures of this history is Galt’s precision with numbers. An appendix at the end records tax and excise revenues literally to the penny!)

The question of land-holding, he observes, had been bedevilled by the existence of ‘Clergy Reserves’ and of ‘Feudal or Seigneurial Tenure’:

Galt is passionate in countering the charge that Canada had been “lavish and wasteful” in resolving such problems (which leads one to suppose that he had indeed faced such criticism from sceptical British financiers). On the contrary, he says, questions of property rights had been the cause of political division and violent disorder in many other parts of the world. Their resolution in Canada had been achieved with remarkable serenity and economy.

He records that land in Canada is available for purchase by immigrants at 2 shillings an acre, with the responsibility of government confined to “opening of the leading county road” in each district at a total cost of only £15,000 pa. “No further expenditure is made from the public chest”.

He goes on to describe the existing infrastructure of roads, canals (with the enlargement of the Welland Canal in 1841 and thereafter, meaning that vessels of up to 800 tons could now reach Lake Ontario) and rail with 1,112 miles of trunk rail – or 2,093 miles if spur lines were included – now representing “probably the most complete and comprehensive railway system in the world”.

In order to “remedy the evil effects” of English regulations that favoured its own steamships, Canada had been obliged to subsidise a weekly line of steamships of her own at a cost of £45,000 pa.  The journey from Quebec to Liverpool took 10 days 3 hours. Liverpool to Quebec was a little slower, at 11 days 5 hrs.

Throughout the history, Galt is careful to avoid all reference to political turmoil in Canada (though these were pretty turbulent years!) “Canada stands at the bar of public opinion in England to be judged not by the acts of any party, but as a whole: and no public man possessing any claim to patriotism would seek, by parading sectional difficulties and disputes, to gain position in Canada through the disparagement of the country and her acts in England.”

Galt ends on an optimistic note for the future for Canada, and Canada-UK relations: “…whatever may be the future destinies of Canada, her people will always value as their most precious right the free and liberal institutions they enjoy, and will cherish the warmest sentiments of regard towards the mother-country, from whom they have received them.”

Posted by Francisca Fuentes Rettig at 8:10 AM