The Garden of Good and Evil

Several months ago, I was privileged to see a preview of ‘The Garden of Good and Evil', Chilean artist Alfredo Jaar’s latest exhibition at the Yorkshire Sculpture Park.  Trained as a filmmaker and architect, Jaar’s work crosses mediums yet is consistently concerned with the human experience of political repression and socio-political power.  As such, he labels his work ‘public interventions’: they are direct confrontations to how we see the world and act in it, challenges to engage intellectually and respond ethically.

Having in the past dealt with such large and difficult subjects as Chile under the Pinochet dictatorship in 'Are You Happy', the Nicaraguan Civil War, the Rwandan Genocide in 'The Rwanda Project', US ethnocentrism in 'This Is Not America', and migration to the EU in 'One Million Finnish Passports', 'The Garden of Good and Evil' powerfully explores the space of so-called CIA ‘black sites’ of rendition and torture in a meticulous arrangement of steel cells amidst a tranquil copse. 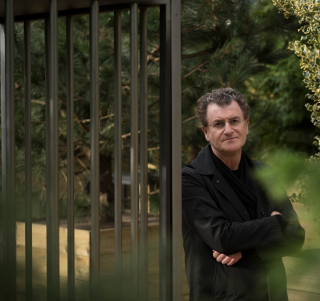 The retrospective work collected in the indoor gallery is similarly political in nature but by contrast is more directly concerned with two other recurring motifs in Jaar’s work: the ethics of representation and the value of the written word.  These concerns are perhaps best encapsulated by the poster ‘You Do Not Take A Photograph.  You Make It.’ (a phrase attributed to US photographer Ansel Adams) which visitors are invited to take home.  Variously referencened throughout the exhibition are also Antonio Gramsci, Samuel Beckett, and E.M. Cioran whose words have been transformed into glowing neon installations. 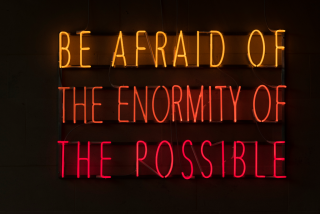 Alfredo Jaar, Be Afraid of the Enormity of the Possible, 2015. Courtesy of the artist, New York and YSP. Photo credit Jonty Wilde.

Taken from Romanian philosopher Emil Cioran's On The Heights of Despair (Pe culmile disperării), 'Be Afraid of the Enormity of the Possible' is exemplary of Jaar's artistic practice which works across forms, is robustly intellectual, and speaks to and of the world. 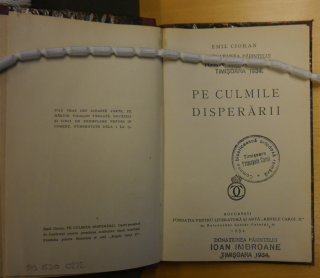 Jaar's art is always in dialogue, and in being so it is lifted beyond a superficially nihilistic exploration of trauma.  Read in conjunction with the photographic and film works that form the remainder of the exhibition, these pieces act as a model for an alternative mode of viewing and interpreting the photojournalism of suffering and violence.  Indeed, he has said that he has been heavily influenced by photojournalist Koen Wessing, particularly the photobook recording the Chilean military dictatorship Chili September 1973. 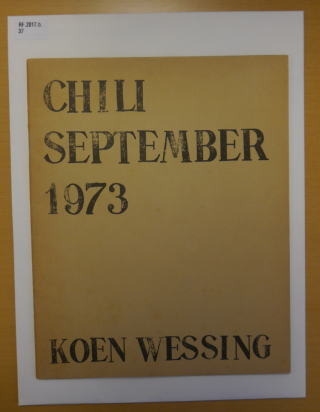 Jaar engages directly with Wessing's photographs in his piece 'Shadows'.   In it, we see several photographs of two young women mourning their father who was murdered by the Nicaraguan National Guard.  The final enlarged projected photograph of their twisted bodies, faces pained with trauma is literally burnt onto the viewer's retina as the image fades leaving just their outlines in blinding white light: we are forcefully made aware of our relationship to these people, the damage that is caused by viewing, and the requirement to view. 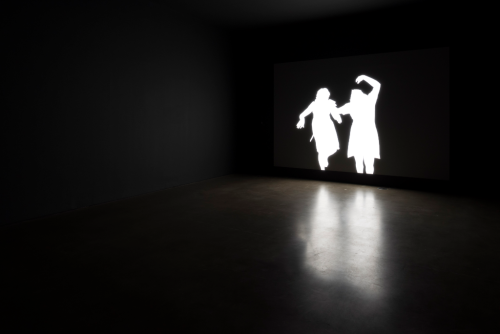 The Library holds a number of Jaar's monographs which detail his career spanning several decades, and you can also find many of the literary, philosophical and photographic works referenced in his art in our collections.

'The Garden of Good and Evil' runs at the Yorkshire Sculpture Park until 8 April 2018.