Diplomacy and bibliophily: a gift from Benjamin Franklin to Thomas Grenville?

Thomas Grenville (1755-1846)  is best known in the British Library as the owner of a library of some 20,000 volumes, which he bequeathed to the BM thanks to the negotiations (some say machinations) of Anthony Panizzi.

Born in 1755 into a political Whig family (his brother, Lord Grenville, was Prime Minister from 1763-65), Grenville retired from public life in 1818 to devote himself to his library, which he kept in his residence at Hyde Park Corner.  Now demolished, it has been replaced with an up-market hotel. 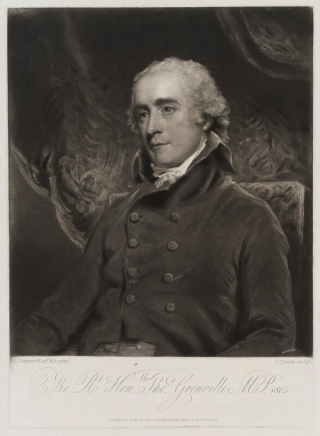 But prior to retirement he had been a diplomat. He represented Britain at the conference in Paris in 1783, which negotiated the independence of the United States of America.

Among the American negotiators was the multi-faceted Benjamin Franklin.

Grenville’s copy of Franklin’s edition of Cicero’s Cato, on Old Age (G.17543), bears in a bold hand on the fly-leaf: Grenville. The small and neat hand above it is Grenville’s. 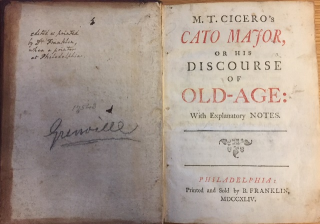 A large proportion of Grenville’s library was devoted to the Classics, as was to be expected of a connoisseur of his time. Grenville’s academic credentials went further than that: he and his brother produced an edition of Homer, with the aid of their old Oxford tutor William Cleaver. So great was Grenville’s attachment to this project that he kept the proofs and working papers.

Among his other talents, Franklin was a printer, and his work is praised in the highest terms in a Library of Congress online exhibition [https://www.loc.gov/exhibits/franklin/franklin-printer.html]:

In his ‘Printer to the Reader’, Franklin explains that he has printed this piece ‘in a large and fair Character, that those who begin to think on the Subject of old-age ... may not, in Reading by the Pain small letters give the Eyes, feel the Pleasure of the Mind in the least allayed.’

What better gift for the book-loving Grenville?  If our copy of Cato was indeed presented by Franklin to Grenville on the occasion of the Congress of Paris, he could be sure that it was going to a good home.

Barry Taylor, ‘Thomas Grenville (1755-1846) and his books’, in Libraries within the Library: The Origins of the British Library’s Printed Collections, ed. Giles Mandelbrote and Barry Taylor (London, 2009), pp. 321-40

Posted by Francisca Fuentes Rettig at 9:33 AM