Pamphlets have for centuries been an important medium for disseminating news and ideas and rallying public opinion, but their typically subversive nature made them a thorn in the side of rulers in Early Modern Europe. Pamphlets were notoriously vulgar and unreliable, and as such, the term ‘pamphlet’ and ‘pamphleteer’ were often used in a pejorative sense –– at one point even used as a synonym for a prostitute.1 But what of the pamphlet in 20th century America? How did new and improved technology and a radical, modern political landscape alter the nature of the pamphlet?

Having carried on much previous research on the radical politics of the interwar period, I was very excited at the prospect of exploring American political pamphlets from 1920-1945. This project is an AHRC-funded Collaborative Doctoral Partnership between the British Library and the University of Sussex, which makes use of the extensive collection of American political pamphlets held at the Library. The full scope of the pamphlets available is not yet known, and one of the major aims of the project is to produce a coherent and comprehensive digital database of the pamphlets for the Library, making them more accessible for both researchers and the public.

I feel extremely privileged to be given the opportunity to work with these pamphlets, many of which feature wonderful illustrations and photography. For example, this pamphlet issued by the Friends of the Soviet Union is filled with photos of working life in the Soviet Union, intended to display the ‘tremendous achievements’ of the first Five Year Plan. 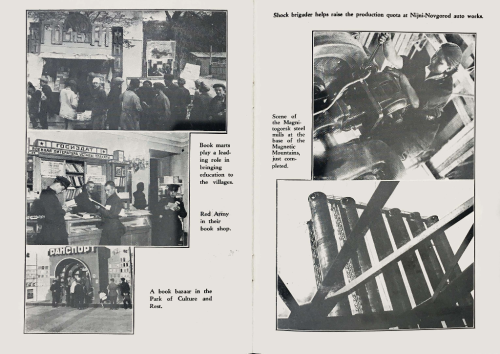 Page from Soviet Pictorial: Forging Ahead, published by the Friends of the Soviet Union in 1931. Shelfmark YD.2007.a.2167

This pamphlet by Pioneer Publishers (publishing house of the Socialist Workers Party, formerly the Communist League of America) is just one example of the some of the striking, politically-charged artwork to be found within many of these publications. This example features work by Laura Gray, who often produced illustrations for the Socialist Workers Party. Other notable radical illustrators to be found in the collection include Hugo Gellert, Robert Minor and William Gropper. 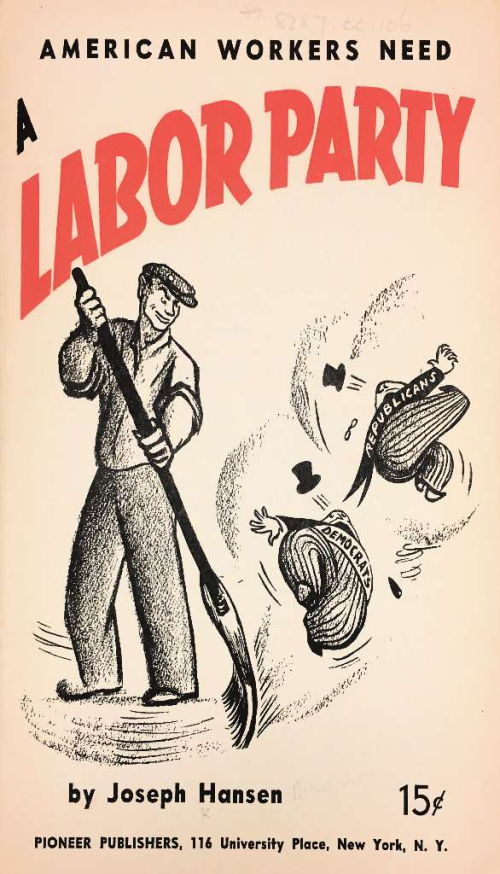 The history of pamphlets is not a topic that has been researched extensively, and what has been written focuses more on their uses in early modern Europe. This project hopes to bring to light the significance of the political pamphlet in modern America, eventually contributing to a more comprehensive history of the pamphlet overall. Some of the questions I will be asking include:

With regards to the content of the pamphlets, I am especially interested in exploring the interaction through pamphlets between the Left and conservative and fascist anti-communist groups and organisations. For example, how either side dealt with the other as a respective threat. The interwar period was marked by increasing ideological polarisation across the world, and America was no exception. On the one hand, this period saw the creation of the Communist Party of America along with many other left-wing organisations that had been inspired and strengthened by the Bolshevik Revolution of 1917, and on the other hand new fascist-inspired groups were formed while older far-right groups such as the Ku Klux Klan saw its membership reach its peak of 4 million in the 1920s. The raison d’être for the majority of the far-right became fighting the supposed international threat of Jews and Communists. At the same time, political repression on federal, state and local levels was overwhelmingly justified on anti-communist grounds. I want to explain how pamphlets were used by the Left and civil liberties groups to counter these threats, and how successful they were in doing so.

To be a PhD student with the British Library is an invaluable experience – from the extensive access to important resources, the support and expertise of staff, and the many opportunities available. I have enjoyed every moment and I am excited to unlock all the potential of this project.

Posted by Mercedes Aguirre at 3:51 PM