“Why can’t we study ourselves?”: The case for Caribbean history in the West Indian Gazette

‘A community, like an individual, to grow in wisdom needs to know and accept its own past.’[1]

Writing in the West Indian Gazette in 1961, Shirley Gordon put forth the case for a reinvigoration of West Indian history in her article ‘The Teaching of W.I. History’.[2] Founded in 1958 by Claudia Jones a Trinidadian-born political activist and commentator, the West Indian Gazette was the first Black newspaper to be sold on the British high-street. Shirley Gordon was a life-long advocate of, and activist for the development of West Indian history, recognising the problems that arose out of historical neglect and distortion. 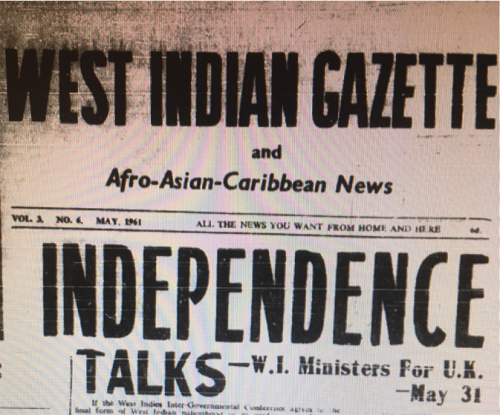 My current research at the library looks into the multiplicity of ways in which history manifested itself in Caribbean popular culture in 1960s and 1970s Britain. At the moment, I am focusing on history segments in British-Caribbean publications such as the West Indian Gazette and Flamingo, with an emphasis on the moment of Caribbean independence across the 1960s. Whilst searching through the West Indian Gazette ‘Know Your History’ features I stumbled across Shirley Gordon’s article. Although not part of the ‘Know Your History’ feature, Gordon’s writing about history teaching encapsulates what history segments in journals and newspapers were trying to achieve.

Using an analogy of the human life-cycle she compared the trauma of slave society to ‘the long and unhappy childhood of the community’, and ‘the post-emancipation society’ as a form of ‘adolescence’ which suffered ‘under its prolonged colonial tutelage’.[3] Moving into the present, for Gordon this represented the ‘problems and challenges’ associated with ‘human as well as political adulthood.’[4] These problems and challenges included overcoming the historic imposition of European colonial history, which had overshadowed a much needed locally-oriented yet transnational West Indian narrative. Through this life-cycle analogy, Shirley Gordon depicts history as part of a personal, or rather communal, search for identity. In this case, history is the nation. 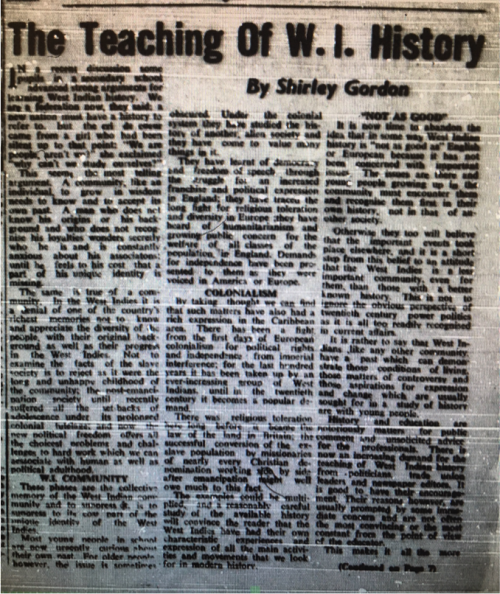 The profundity of remedying West Indian history-telling was no doubt connected to the dawning of independence on the region; ‘a new nation must have a history to refer to’.[5] Although a ‘new nation’, the assertion of a unique West Indian history at this moment in time, was deeply focused on evidencing historicity and diversity. Commonly found among the pages of British-Caribbean newspapers and journals were reconstructions and stories of the native peoples of the Caribbean – the Arawaks, Caribs and Taínos – and of its powerful and regal African roots and connections. My drive to research the meaning and expressions of history is no doubt boosted by Gordon’s implication that history is integral to national development, especially in the post-colonial context. It seems that history, in its countless forms, shapes and styles was critical for exploring the Caribbean’s identity, strength, and ability to imagine and build a future. Such cultural manifestations of the region and its diaspora’s history will be explored and displayed in the upcoming ‘Windrush: Songs in a Strange Land’ exhibition, opening on 1 June 2018. The Caribbean’s historical tapestry has been woven out of novels, music and political movements amongst other things; from Andrea Levy’s Small Island to Lord Kitchener’s calypso tunes, this renegotiation and reimagining of the Caribbean will be made visible in the exhibition’s diverse offerings.

Naomi Oppenheim is a PhD candidate on a CDP at the British Library and UCL. She is currently researching British-Caribbean popular culture and the politics of history in the post-war period.

Posted by Elizabeth Cooper at 7:21 PM