L is for Labor

May Day is celebrated in most of the world, including the US, on May 1st (in the UK, it falls on 7 May this year, due to the tradition of holding national holidays on Mondays).  It is now of course associated with International Workers' Day.  The date was chosen in commemoration of the 1886 Haymarket Affair in Chicago, following the deaths of civilians and police at a rally for an 8-hour work day.

Amongst the many May Day related materials in our collections are these recently acquired pamphlets. Published in 1938 and 1939 by the Communist Party of the United States, they draw direct correlations between the activities of workers and the struggle against fascism.

"In the democratic countries, the workers will marhsal their forces in parades, demonstrations and meetings.  In the fascist countries, workers will gather in small groups, hidden from the police and fascist murder-bands, and once again will tell the story of May Day, and prepare for militant struggle to restore democracy."

Additionally, they point to the rise of fascist groups across the Americas, thereby making the call for labor unity more immediately urgent for their US audience.

Sold at 1c, these pamphlets were aimed at a broad audience, some of whom may not have been familiar with the histories discussed within or the language of labor movements.  For those, the following publication would have been of use: 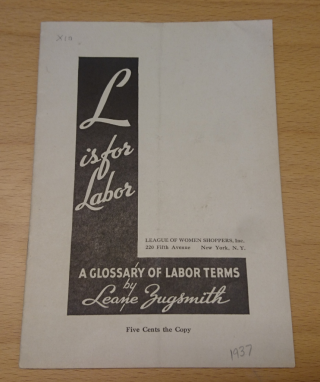 Published by the League of Women Shoppers in 1937, L is for Labor: a glossary of labor terms introduced its readers to the "new language" of labor, a language with the "color and vitality of great human movements."  This was a clever strategic move by the League who aimed to educate consumers on the rights of shop-workers, and encourage them to support union organising in the shops that they patronised.  Listing such terms as 'blacklist', ' boycott', 'collective bargaining', 'industrial accident', 'paternalism', and 'preferential shop', it provided a rapid education in the underlying principles and actions of labor movements that May Day exemplifies.