Over There, All Over Again: American Sheet Music, World War 1 and Nostalgic Musicals

It is always a great pleasure when you find your research coinciding with that of your colleagues. There has been a recent spike in discussions around American music and World War I in the Eccles Centre as Jean Petrovic is currently developing an online exhibition showcasing the British Library’s excellent collection of American sheet music, whilst I am researching American musicals of the early 1940s which looked back at World War I and vaudeville.

As part of her project, Jean has been focusing on World War I, which saw an explosion in printed music. At the turn of the twentieth century – prior to the rise of radio and the phonograph – pianos were still the main source of home entertainment. Recent innovations in production had bought about a sharp decline in prices and an inevitable rise in demand. Not surprisingly, this was a boom-time for song-writers and music publishers. Print runs of top-selling songs frequently exceeded hundreds of thousands and between 1900 and 1910 more than 100 songs sold over one million copies.

More than 10,000 songs about World War I were published in the United States during 1914-18. In the early days, many of these songs echoed the non-interventionist stance of President Woodrow Wilson and most Americans.

Within days of the US declaration of war in 1917, George M Cohan, already one of the country’s most successful songwriters, penned ‘Over There’. With its patriotic call to arms, its optimism and its references to liberty and the American flag it went on to become the nation’s favourite war song. It was performed and recorded by many artists and eventually sold more than two million copies. 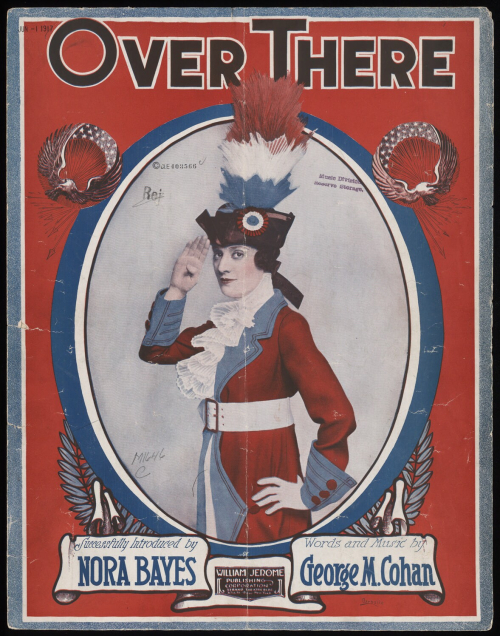 In 1936, President Franklin D Roosevelt presented Cohan with the Congressional Gold Medal in recognition of his contribution to US morale during World War I.  He was the first person in an artistic field to receive this honour.

And this is where I come in. During America’s participation in World War II, a notable body of musical films were produced which reflected on the current crisis through the historical metaphor of America’s role in World War I. By binding these wartime stories with settings concerned with vaudeville and performance, these films conveyed patriotic messages and made entertainment culture central to American values. 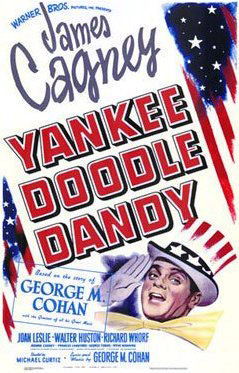 In 1942, director Michael Curtiz made Yankee Doodle Dandy, a biopic about Cohan’s life. The narrative is framed by Cohan, in the present day, going to visit President Roosevelt at the White House where he discusses his career and receives the Congressional Gold Medal (despite the award actually being made 6 years previously). In the urgent context of World War II the film places Cohan (but also by extension Hollywood itself) as vital agents in America’s cultural mythmaking: the inclusion of his famous, popular songs (‘Over There’, ‘Give My Regards to Broadway’, ‘The Yankee Doodle Boy’ and ‘You’re a Grand Old Flag’) and production numbers involving a lot (and I mean A LOT) of flags, allow the fictional President Roosevelt to comment to Cohan that “your songs were weapons as strong as cannons and rifles in World War I."

Interesting, whilst the film was certainly an important part of Warner Brothers Studio’s commitment to the war effort, aimed partially at legitimizing their own work in the context of the war, the unashamedly patriotic film also served an interesting purpose for its star, James Cagney, who had personally struggled to deny Communist links.

Cagney had initially been opposed to making a Cohan biopic as he’d disliked Cohan since the Actor’s Equity Strike in 1919 when Cohan had sided with the producers. However, during the late 1930s and early 1940s Cagney had run-ins with the Dies Committee (the House Un-American Activities Committee): in 1940 he was named along with 15 other Hollywood figures in the testimony of John R Leech (an LA Communist Party leader) and the New York Times printed the allegation that Cagney was a Communist on its front page (August 15, 1940).

Although Cagney refuted the allegations and Martin Dies made a statement to the press clearing him, his brother, William Cagney, who managed his business affairs is reported to have said that “we’re going to have to make the [most] goddamndest patriotic picture that’s ever been made. I think it’s the Cohan story.”[1] The film certainly achieves this aim: Cagney went on to win an Oscar for the role (and the film was a huge box office success for Warners).

For those interested in learning more about the American sheet music collection at the British Library, Jean’s web exhibition will go live later this summer.  In the meantime, an older incarnation of the project can be found here.

I will be discussing ‘American Film Musicals and the Reimagining of World War I’ as part of the British Library’s Feed the Mind series on Monday 21 May at 12.30 in the Knowledge Centre. I can promise clips of Gene Kelly, which must rate as one of the best ways to pass a lunch break. I hope you’ll be able to join me.

By: Dr Cara Rodway, Deputy Head of the Eccles Centre for American Studies, with thanks to Jean Petrovic, Bibliographical Editor.

Posted by Philip Hatfield at 12:09 PM