The central role of Migration in the development of the United States ensures it is a theme well represented upon the nation’s postage stamps. The first to tackle the subject was the United States 1869 Issue 15 cent stamp containing James Smillie’s vignette engraving depicting the landing of Columbus in the Americas on 12th October 1492. Based upon John Vanderlyn’s famous painting now displayed inside the Capitol’s Rotunda in Washington, this event is widely recognised to be a turning point in the history of migration to the Americas. Furthermore this stamp and succeeding issues all provide clear allusions to the economic, military and religious incentives behind the waves of migration to the American Continent since the closing years of the fifteenth century to the present day. 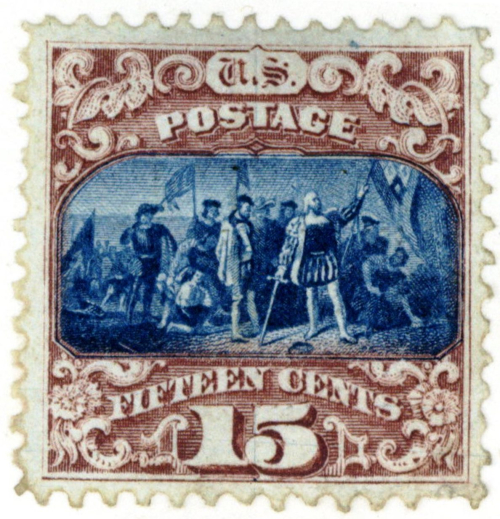 The main objective of Columbus’ voyages was to establish maritime trading routes to the East Indies; instead he discovered the New World. The wealth accrued by consequent Spanish colonial, military and economic in the Americas in turn encouraged mercantile classes from rival European nation states to try and emulate such economic success. The French, English, Swedish, Dutch and others all established colonial settlements within North America from the sixteenth century onwards. The United States 13 July 1984 20 cent stamp commemorating the 400th Anniversary of the First Raleigh Expedition to Roanoke Island depicts the Elizabeth Galleon, one of the vessels involved in establishing the famous Roanoke Colony which vanished under mysterious circumstances. 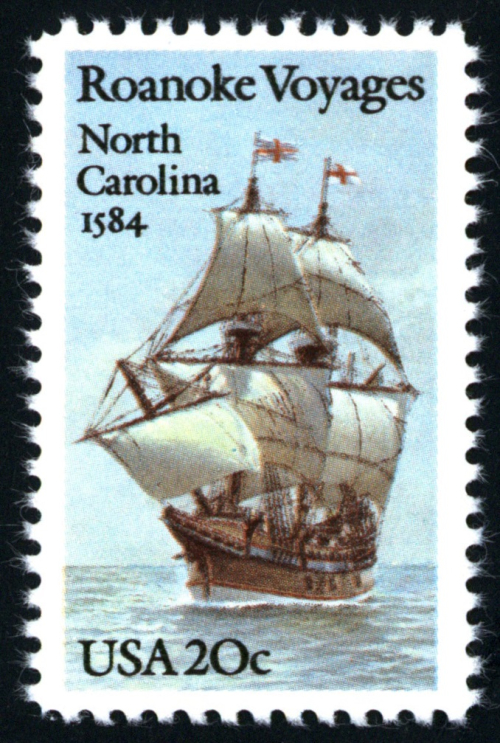 More successful was the establishment of England’s first successful permanent Colony established at Jamestown, Virginia by the Virginia Company in 1607, an event commemorated on the United States 1907 Jamestown Exposition Issue 2 cent stamp. 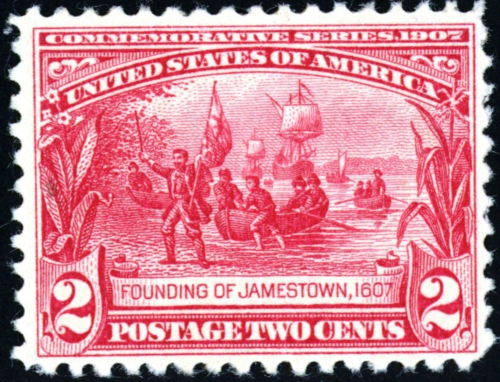 The United States 27 June 1938 Issue 3 cent stamp commemorating the tercentenary of Scandinavian Settlement in America depicts the establishment of a colonial settlement by Swedes and Finns on the lower reaches of the Delaware River in present day Delaware, New Jersey and Pennsylvania in 1638. 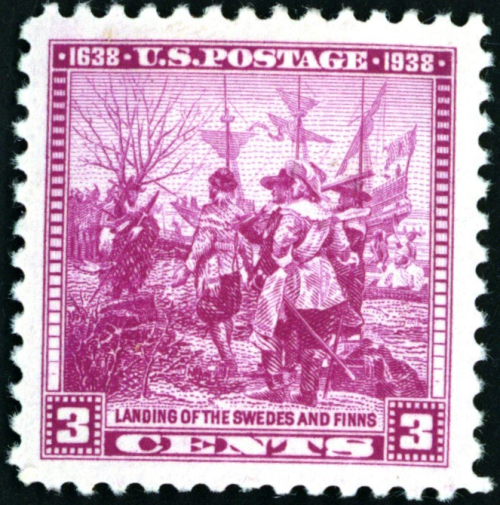 Religious and political persecution in Europe during the early seventeenth century also led to migrants settling in various parts of America. The United States 18 December 1920 Issue 2 cents stamp commemorates the tercentenary of the migration of a group of religious dissenters known as the Pilgrim Fathers who established Plymouth Colony, Massachusetts in 1620. 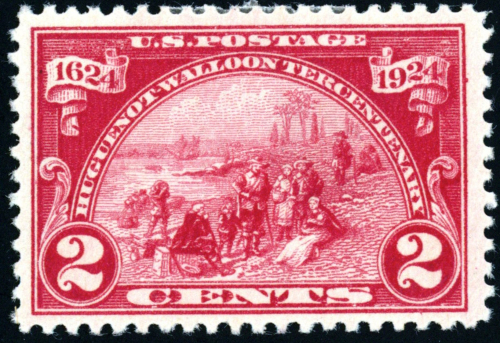 Missionary activity also resulted in migrants settling within America, individuals like a major the French Jesuit Missionary Father Jacques Marquette (1637-1675) established settlements at Michigan and was one of the first Europeans to explore and map the northern portion of the Mississippi River. His exploits commemorated on both the United States 10 June 1898 issue 1 cent and 20 September 1968 Issue 6 cent stamps. 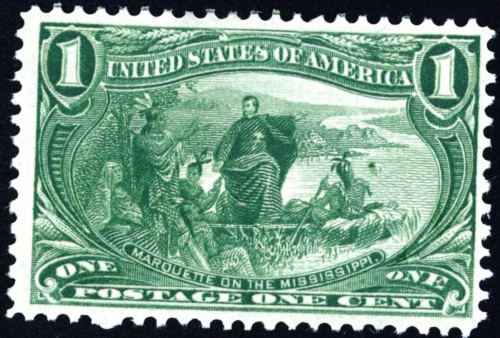 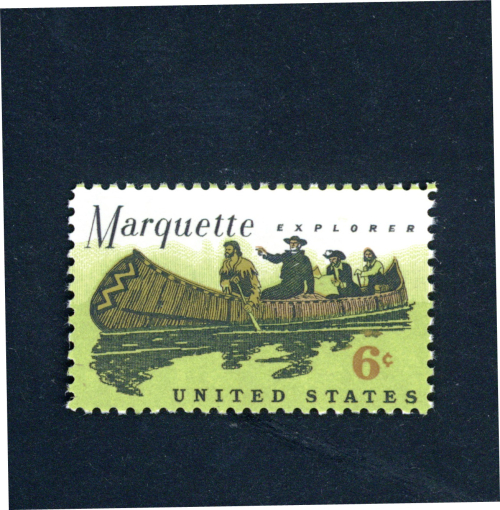 After the War of Independence, the territorial extent of the fledgling United States was largely confined to the eastern seaboard of America. As an independent nation the government initiated a continued policy of westward expansion into the hinterland of North America. This expansion extended the Nation’s boundaries to the Pacific coastline. One of the earliest of such migrations into the North-West Territories now known as Ohio, Indiana and Illinois conducted by veterans of the War of Independence and the Ohio Company has been commemorated on the United States 15 July 1938 Issue 3 cent stamp. 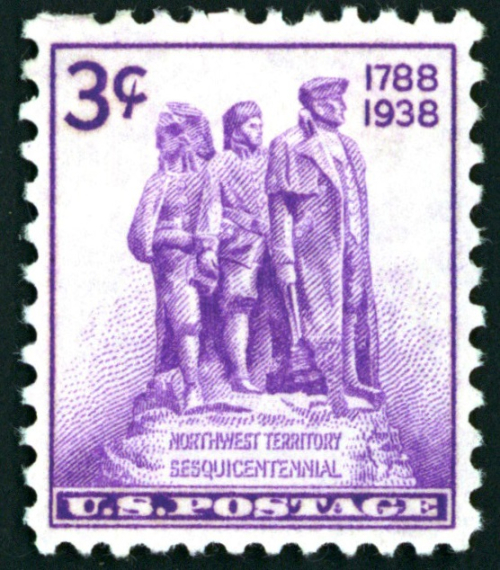 Further South, Daniel Boone’s famous explorations in Virginia resulting in the establishment of the Kentucky Settlement in 1792 has also been depicted on the United States 1 June 1942 Issue 3 cent stamp to commemorate Kentucky’s 150th Anniversary. 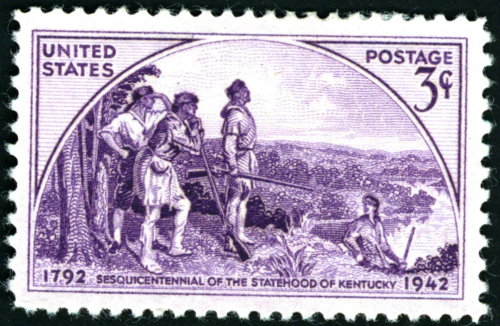 The United States Government also acquired territory for settlement via diplomacy and financial transactions with foreign colonial powers. A good example is the acquisition of lands acquired from the Spanish and French which formed parts of the Mississippi Territory, a precursor to the State of Mississippi established in 1798. The various stages of this expansion are depicted on the United States 8th April 1948 Issue 3 cent stamp commemorating the Territory’s 150th Anniversary. 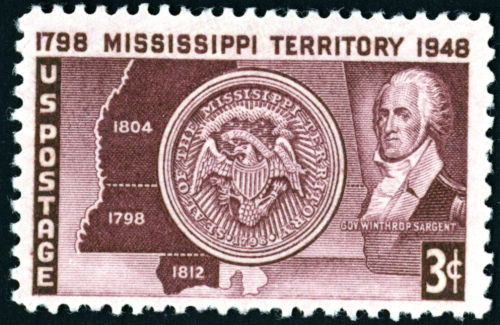 Pioneers and settlers involved in such migration and settlement faced significant dangers and hardships in the form of starvation, disease and violence. Such conditions are alluded to in the United States 10 June 1898 Trans-Mississippi Exposition, Omaha Issue, 8 cent stamp depicting troops guarding a pioneer train from attacks whilst the 10 cent  depicts a dead horse on a pioneer wagon. 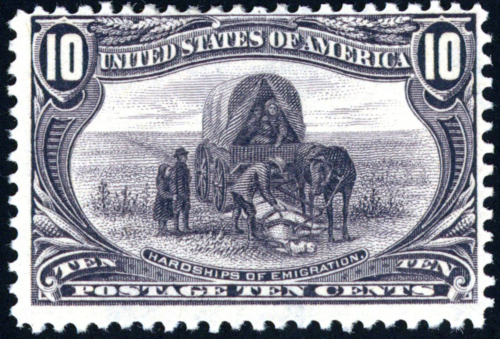 With such privation in mind, the Government introduced financial incentives for westward migration in the form of various Government Acts offering land parcels at favourable prices or for free. The United States 20 May 1962 Issue 4 cent stamp commemorates the 1852 Homestead Act passed by Abraham Lincoln offering public land in the west to any US citizen, including free slaves, who was willing to settle, farm and improve the land over a period of five years. 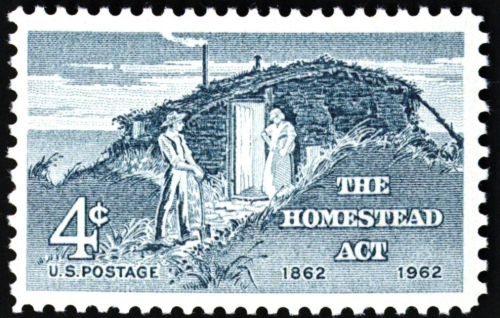 The forced migration of African slaves to America is unrepresented on the library’s United States philatelic holdings. Nevertheless one particular issue which demonstrates its importance in shaping America is the United States 20 February 1987 Black Heritage Issue 22 cent stamp depicting an idealised portrait of Jean Baptiste Pointe du Sable and some of his property and lands during the late eighteenth century which helped found modern day Chicago. 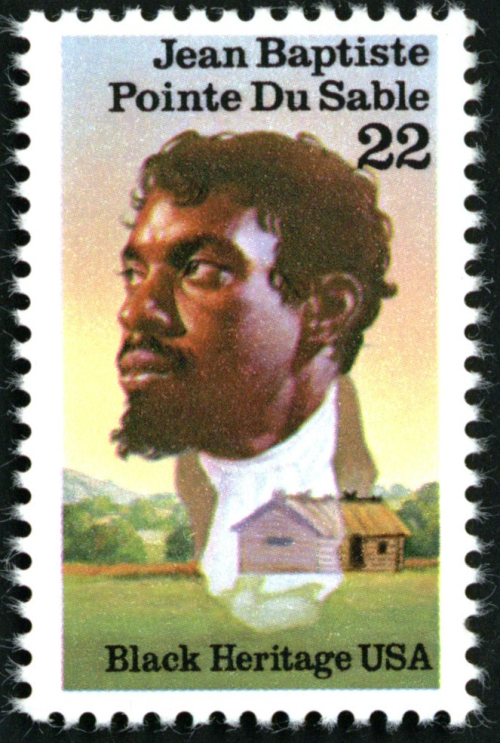 Images from the British Library, Philatelic Collections:  The Tapling Collection and UPU Collection material for the  United States of America.

Posted by Mercedes Aguirre at 10:05 AM