Reporting from the reading rooms: Brazilian writers and translation

3 weeks into my stint as Translator in Residence at the British Library, I’ve finally made it into one of the reading rooms and actually looked at some books, which I’ll admit is a rather unorthodox thing to do in a library. While the desks of my companions in the European collections department, where I’m based for the year, tend to be overloaded with books from the collections, administrative issues left me temporarily unable to do this, and so I was forced to join the masses and access my materials the way the vast majority of BL visitors do, in one of the many reading rooms. Besides, I am meant to be resident here, so it would be remiss of me not to actually visit one. Thus I found myself, on a hot Wednesday afternoon, collecting my reservations from Asian and African Studies  (not quite the nearest to my desk, but more exciting-sounding than ‘Science 3’)  and sitting down with other members of the public to get stuck in.

In the weeks prior to this, I’d been randomly typing names into the catalogue whenever they sprang to mind, and I was excited to finally have a look at some of these books in the flesh. I started by looking at books by or about two 20th Century Brazilian  authors I’m currently reading, before going back in time to the early days of modern Brazil.

The first book I looked at was Cartas de viagem e outras cronicas (Travel letters and other chronicles), the collected non-fiction of Walter Campos de Carvalho, who occupies a strange role in Brazilian letters. As yet untranslated into English (I’m trying to change that, publishers take note!), he has never been a canonical writer in Brazil either, and until recently his books have been largely unattainable over there too. The four novels he published between 1956 and 1964 before ceasing to write anything substantial for the 34 years between then and his death, were  more indebted to European surrealism than to Brazilian literary trends, and certainly do not fit in with the outsider’s view of Brazil better represented by the writing of someone like Jorge Amado. To give one example, his last novel, O Púcaro Búlgaro (The Bulgarian Jug) describes the ill-fated attempt by a band of explorers to find out whether or not Bulgaria actually exists. In light of that, this collection is worth reading for the introduction alone, which contains the following excerpt from an interview with the great man who, like his work. was difficult, distant but also hilarious:

Interviewer: Today, with all the technological process that’s been made, is it now possible to say for certain whether or not Bulgaria exists?

Interviewer: Do any other countries not exist?

CDC: Argentina. I was there two years ago, but still I wasn’t convinced. I went to Mar del Plata…to a casino… The casino did exist though, I left all my money there.

His travel diaries are no less wry. Here he is on London: ‘A city where, when it’s not raining, a huge storm is always brewing…P.S. – in London there’s a newspaper called The Sun; it only comes out twice a year.’

I then looked at a transcription of an interview with another novelist, José J. Veiga, called Atrás do Mágico Relance (A Glimpse behind the magic). Unlike Campos de Carvalho, two of Veiga’s books did make it into English in the early 70s, though sadly they have never been reprinted. Associated at the time with the ‘boom’ generation of Latin American ‘magic realist’ authors such as Julio Cortázar and Gabriel Garcia Márquez, Veiga’s work is rather different, though it certainly deals with the fantastic in an equally effective way. The interview was fully of interesting insights, but I was particularly struck by Veiga’s reply when asked if he was influenced by (Spanish language) magic realism:

Veiga: No…I only read Garcia Márquez and Borges after having published two or three of my own books, so I wasn’t influenced by them…we (ie Brazilian writers) are unknown to…Spanish-Americans, but they’re also ignored by us, that is, there’s no exchange between us…there never was.

The novel of Veiga’s I’m keen to translate, Sombras de reis barbudos (Shadows of bearded kings) a wonderful blend of bildungsroman, political allegory and fantasy, has been translated into Spanish, but like other Brazilian prose masterpieces such as Mário de Andrade’s Macunaíma and João Guimarães Rosa’s Grande Sertão: Veredas, it’s very much out of print in its sister tongue. Things aren’t so different here; most informed readers could name one or two Spanish-American authors, maybe Gabriel García Marquez or Jorge Luís Borges, but might find it harder to name their Lusophone peers.

Finally, I went back a few centuries to Pero de Magalhaes Gandavo’s History of the Province Sancta Cruz, which we commonly call Brazil. The translation, by John B. Stetson Jr, is accompanied by a facsimile of the 1576 original, which the translator first encountered in the BL’s predecessor, the reading room at the British Museum. I came across this account via some recent work I did translating a piece on Brazil for a history magazine, which discussed Gandavo’s descriptions of ‘the Natives of the province’. The fact that he does not discuss them until the tenth chapter, after first addressing the country’s geography, colonial government, plans, animals and, intriguingly, ‘a marine monster that was killed in the captaincy of São Vicente in 1564’, is telling enough. Like Bernal Diaz, who documented the conquest of Mexico some years before, Gandavo just cannot see the ‘natives’ as properly human. They are at once a homogenous mass—‘Although these natives are much divided and have many different names for their tribes, still they are one in their appearance, their condition, their customs and their rites’—and uniquely barbaric, lacking any sense of morality—‘They live at their ease, without any preoccupation save eating, drinking and killing people; and so they grow very fat, but with any vexation they immediately grow thin again’. Undeniably ridiculous as the latter part sounds, such attitudes had appalling consequences: the deaths of up to 95% of the pre-colonial population. And these encounters bring up a fascinating insight into the difficulties of translation in a wider sense: how might someone like Gandavo, a well-off, Portuguese Catholic, have accurately conveyed the complex, and yet totally alien societies he witnessed. 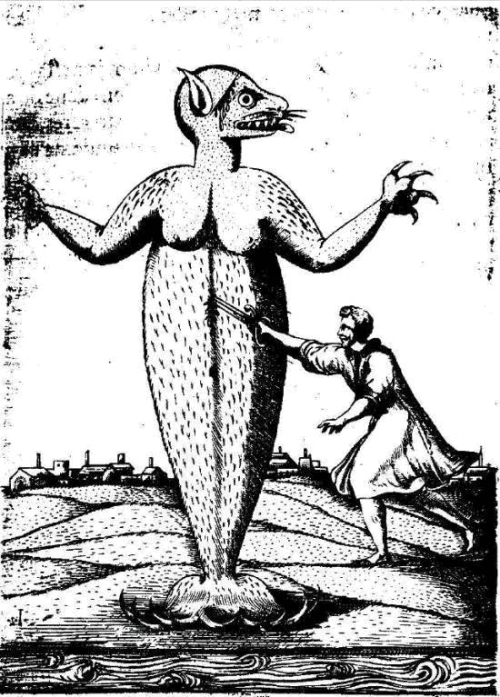 2 hours, 450 years traversed, one hemisphere crossed. Not bad for a first attempt!

Posted by Mercedes Aguirre at 11:48 AM