Beyond the Spectacle: Native North American Presence in Britain

One of the British Library’s primary principles is to support research.  A key way in which we do this is to support research conducted externally, which relates to our collections.  In this vein, the Americas, Contemporary British and Eccles Centre teams are supporting a fascinating project on North American indigenous presence in Britain- “Beyond the Spectacle”.

“Beyond the Spectacle” is a collaborative three-year AHRC funded project investigating the cultural, economic, and political impacts and legacies of five centuries’ of travel by Native North Americans to Britain, whether it resulted in return trips, onward movement into Europe, or even long-term residence in Britain.

The research team, headed by Prof David Stirrup and Prof Jacqueline Fear-Segal and based at the Universities of Kent and East Anglia, will draw upon a diverse range of source material. Much of this has never previously examined -- archival holdings, museum collections, and oral histories—and the British Library’s holdings will be a vital resource.

In the Library, you can see the documents such as deeds of conveyance of lands, and covenants and agreements in our manuscripts collections.  For example, the following document with the mark of three sachem of the Iroquois confederacy, who visited London in 1710 to meet with Queen Anne. 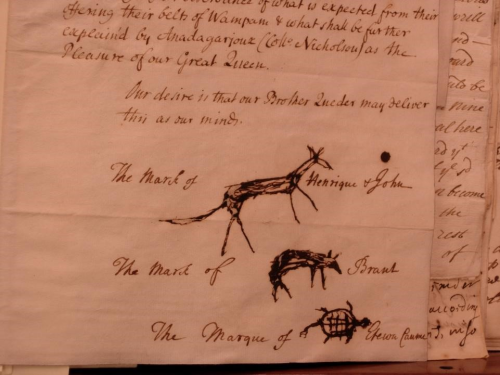 You may also be interested to read about the diplomatic visit by three Cherokee representatives in 1765 following the Anglo Cherokee war, as related by Lieut. Henry Timberlake’s in his memoirs.  Timberlake acted as emissary from the British Colonies to the Overhill Cherokee, and accompanied the representatives on their visit. 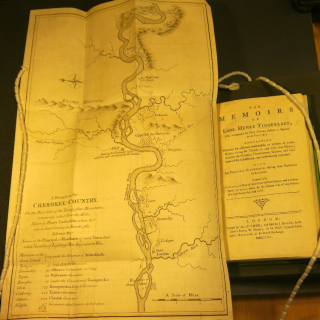 The British Library also holds a pamphlet published in 1848 by the first Native American to organise and lead his own dance troupe around Britain, Maungwudaus (George Henry). 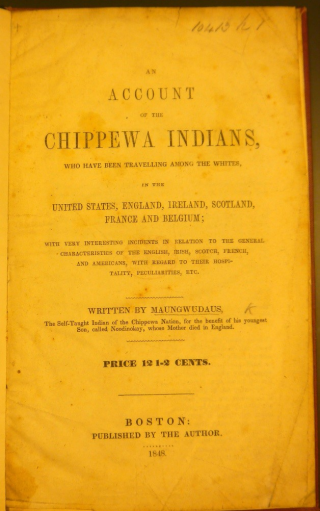 Writer, entertainer, entrepreneur, preacher and herbalist, this gifted Mississaugian man mixed in European high society while representing his own people. He is a key figure in the explorations of ‘Beyond the Spectacle.  His descriptions of his experiences are wonderfully vivid, providing a valuable insight into how he perceived British society, its customs, and how he and his troupe were received as the below passage attests. 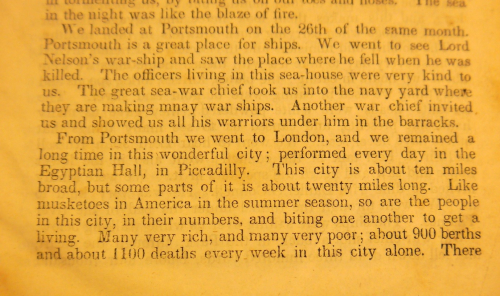 “Beyond the Spectacle” aims to uncover such materials elsewhere in the UK, and enrich our understanding of these complex and fascinating encounters.  To find out more visit the project website, where you can stay updated with the latest uncovered traces of Native American visitors to Britain via the blog and map:

Posted by Francisca Fuentes Rettig at 10:00 AM