The British Library subscribes to numerous digital databases that have both historic and more contemporary holdings from across the Americas.  Crucially, a number of these are available remotely, so registered readers can access them from home.  You can access all of the databases discussed below through the 'databases' link on the Newsroom's webpage.  The below are just a selection of what you can access through our digital subscriptions, do dig around for more, and of course there is more to be found from the rest of the world.

These are perhaps the most popular of our newspaper resources, available to registered readers at just a few clicks from the comfort of your own home.  They include the following databases, each of which contains hundreds of historic titles:

Providing online access to more than 350 U.S. newspapers chronicling a century and a half of the African American experience. This collection features papers from more than 35 states—including many rare and historically significant 19th century titles. 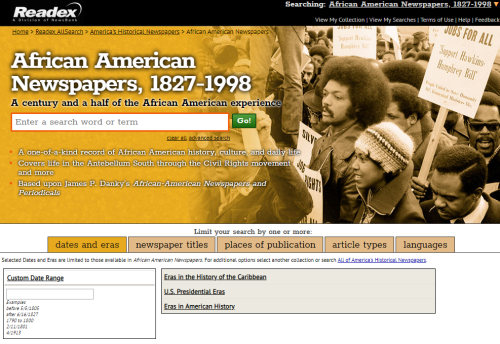 The largest online collection of 18th- and 19th-century newspapers published in the Caribbean. Essential for researching colonial history, the Atlantic slave trade, international commerce, New World slavery and U.S. relations with the region as far back as the early 18th century. 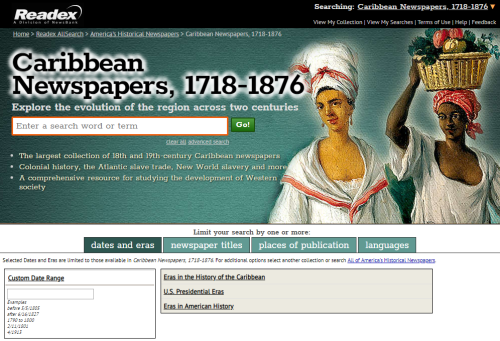 This database includes over forty titles and tens of thousands of digitised issues of Latin American newspapers from across the region – Mexico, Central America, the Caribbean, Brazil and the Southern Cone. 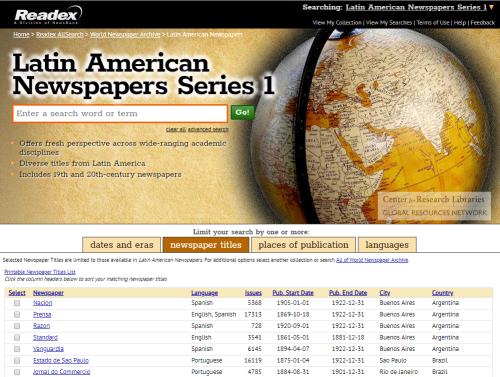 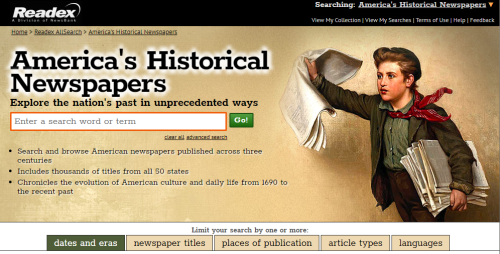 Foreign Broadcast Information Service, which collects the records of the US government operation that translated the text of daily broadcasts, government statements, and select news stories from international non-English sources.  This is particularly interesting for researchers working on US foreign relations, but also a good record of international resources otherwise not available. 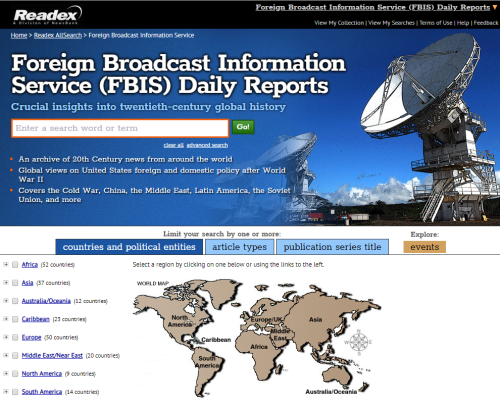 Another extraordinary database, though not available remotely, is Access World News/Newsbank.  This currently provides access to more than 1800 American news sources and is accessible in all British Library Reading Rooms.

On the United States ‘homepage’ the sources are listed by state but can also be searched by region. Clicking the ‘Source Types’ tab reveals the following categories, as well as the number of sources for each of them: audio, blogs, journals, magazines, newspapers, newswires, transcripts, videos and web-only sources. A summary of each source provides the date range covered, the media type, publishing frequency, circulation, ownership and – where applicable – the URL or ISSN. In addition, the news magazines can also be accessed under ‘Short-Cuts/America’s News Magazines’ on the left-hand side of the home-page. Finally, clicking the ‘Source List’ tab reveals an alphabetical list of all news sources, along with their date range, location and source type.

The database’s many notable highlights include:

The newspapers and news magazines in this database are text-only – they do not include the original page-layout, photographs or advertisements.

We hope that this provides some insight into just how much material is available through our digital subscriptions.  We continually add to these, and will post any updates on this blog so please do subscribe if you want to keep informed on the latest available resources.

Posted by Francisca Fuentes Rettig at 11:30 AM