Before Gene Kelly and Leslie Caron immortalised Gershwin’s production, there was another young American in Paris. When Austria-Hungary declared war on Serbia on 28 July 1914, Eric Fisher Wood, a young American student, was ‘quietly studying architecture at the École des Beaux-Arts’ (foreword, v). The journal he kept at the outbreak of war describes the capital’s rapid descent into near chaos and his quick assumption of responsibilities as attaché at the American Embassy then headed by Myron T. Herrick . His account is fascinating for its candid and sympathetic description of the sudden and complete upheaval for Parisians, his fellow Americans and for the German citizens who, mostly by chance, had the magnificent misfortune of being on French soil when war was declared. 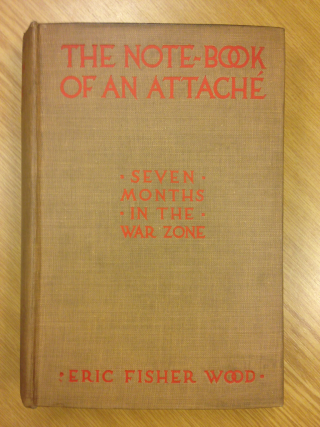 As part of a PhD research placement, I have been working on a collection of French posters from the First World War and reading Fisher Wood’s account in tandem. The correspondence between his description of the period and the story told through the primary material in the poster collection is striking. On 2 August 1914, a poster was issued by the Police department prohibiting people from gathering (attroupement) in the streets. 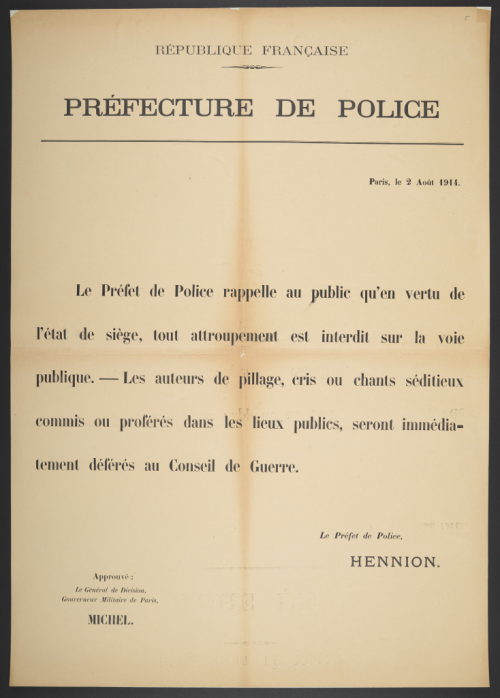 IMG 2. Caption: Poster prohibiting gathering and seditious proclamations and songs in public under the state of siege. Tab.11748.a.F1(5)

In his entry for Tuesday 4 August, Fisher Wood writes ‘One sees everywhere on the sidewalk little knots of people talking in low, troubled voices, and each time just as their conversation is well started they are interrupted by a policeman who reminds them that it is not permitted to s’attrouper in the streets and that they must move on.’ (13) Similarly, in relation to restrictions on opening hours for bars, cafés and the métro, he writes, ‘The Champs-Elysées is probably at present the darkest avenue on earth. (…) The sun seldom rises without revealing the ruins of one of these lamps and of an automobile, the two having mutually destroyed each other in the darkness.’ (37-38). Illustrating this, poster no 15 in the collection gives us the material evidence of these new regulations being implemented, plunging the City of Light into darkness. 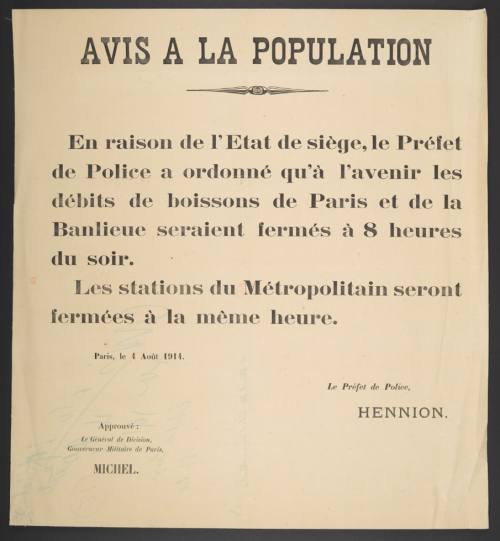 Government poster ordering all establishments selling alcoholic drinks to close by 8pm. Metro stations are to close at the same time. Tab.11748.a.F1(15)

Reading Fisher Wood’s chronicle, we get a sense of just how much daily life and business was completely overturned. He says that all buses vanished from the city to be turned into ambulances and meat wagons, causing scenes of despair and panic for the hordes trying to flee the capital. All kinds of private property, including horses, carriages, mules and even carrier pigeons, were requisitioned by the army to support the war effort, and we have the artefacts of the announcements in the collection. 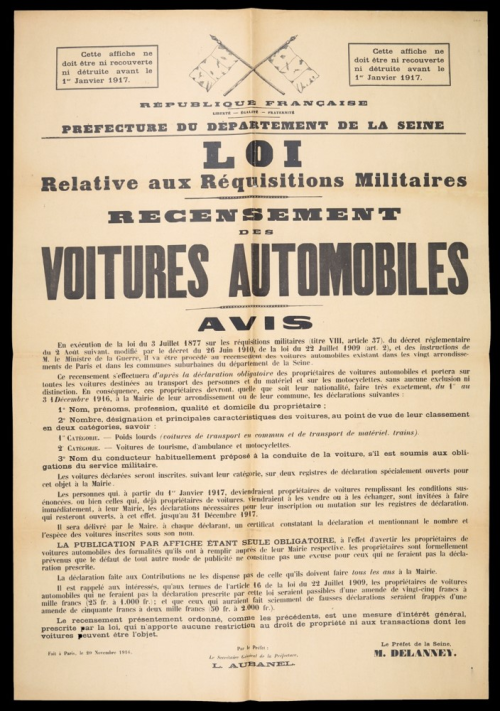 Government poster calling for all heavy vehicles and cars that haven't already been requisitioned to be presented to the Commission of Requisition on 4 and 5 August 1914. Tab.11748.a.F1(10)

Alongside, Fisher Wood’s journal provides an additional layer describing how these requisitions manifested themselves in daily life: ‘All the fast private automobiles are requisitioned for the army, and one sees them tearing along vying in speed with the flying taxis, each one driven by a sapper with another sapper in the footman’s place, while one or two officers sit calmly behind, trying to smoke cigarettes in spite of the wind.’ (14)

During the War, posters constituted one of the principal channels through which information was disseminated to the public, which is perhaps difficult to imagine in our era of instant news feeds and instantaneous information sharing. Fisher Wood notes the ambient confusion and uncertainty that pervaded the population: ‘There are persistent rumours throughout Paris of battles “near Metz” or “on the borders of Luxembourg,” of “two hundred and thirty thousand French troops already in Alsace”, “ten thousand French killed at Belfort,” or “forty thousand German prisoners taken.” (14) In this atmosphere of insecurity, one can imagine just how important these posters were in keeping a fraught population informed of the war’s developments and of the steady stream of government pronouncements. 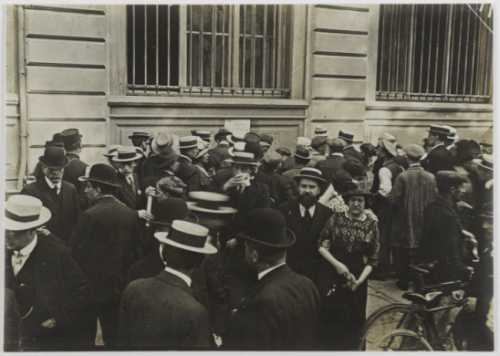 Fisher Wood remarks too that when Général Gallieni, military governor of Paris, was handed power, he took advantage of the new authority to usher through changes that had been hindered by ‘politics’ for years. The scourge of absinthe was suddenly outlawed as were slot machines, designed to ‘catch the hard-earned-sous of the workmen’. (39) 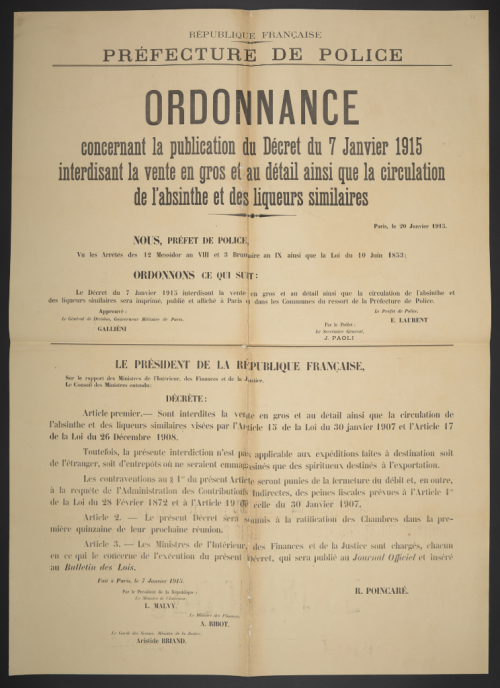 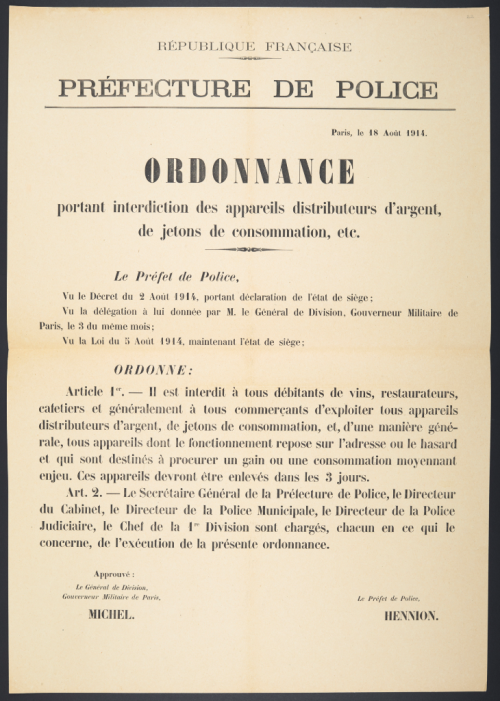 Eric Fisher Wood went on to serve in the British then American Armies, parts of which he recounts in the latter part of his ‘Note-book’. Following the war he returned to the United States and played an instrumental role in setting up what became the American Legion and later established himself as an architect. However the vivid, first-hand account of the experiences of this particular American, in Paris and beyond, especially when read alongside the primary resources of the posters, remains a powerful account of the civilian – and foreign – experience of the turbulent first months of war from the French capital.

Phoebe Weston-Evans is a PhD placement student at the British Library where she is working on a project cataloguing a collection of French War Posters.  She is in the second year of her PhD at the University of Melbourne which looks at the author Patrick Modiano.  Phoebe is also a published translator.

Posted by Francisca Fuentes Rettig at 9:20 AM