As my three-month placement at the British Library reaches its end, the time has come to reflect on my experience. I truly encourage fellow PhD students to apply to next year’s placements. I had a marvellous time, and despite the alluring prospect of not having to commute to London anymore, I know I will miss working for the Library.

So what exactly did I do?

My role was to assess the American collections’ holdings in migrant literature published since the 1980s, by writers of African or Caribbean descent, in Canada and the USA.

Concretely, that meant doing a lot of research online, in literary anthologies and academic publications to find books by migrant writers and check each title against the Library’s main catalogue, Explore.

If a copy wasn’t held, then I would add it to my acquisition list spreadsheet. By the time I had finished, there were over 600 titles on this list. 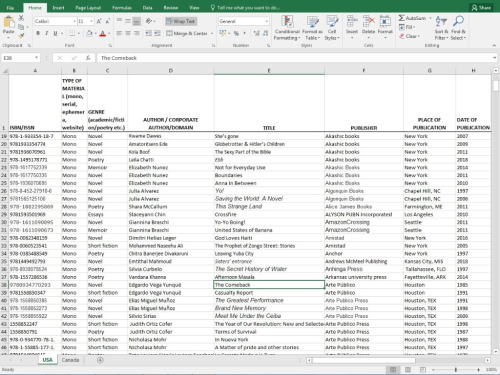 The usual selection process for the North American Collections is quite simple to understand: they have a very large list of publishers from which selection is made based on reader and subject categories that are relevant to the collections. This is determined by curators who follow the Library’s Content Strategy.

My job was to check the most recurring publishers on my acquisition list against the North American list of publishers to ensure these were received in future. As you can see from my spreadsheet, some patterns emerged very clearly: the BL wasn’t receiving books by publishers like Akashic Books and Arte Publico Press, both notable publishers of migrant literature.

Alongside this, I did some archival research. My readings led me to investigate Canadian cultural magazines that had promoted migrant literature at its early stages. I didn’t have much hope in finding La Parole Meteque as Worldcat  (an international bibliographic database) suggested that only three libraries worldwide held copies of it, and even they didn’t own all its issues. But after emailing several second-hand bookshops, members of the Antiquarian Booksellers' Association of Canada, I managed to get hold of 16 issues which will be added to the collections.

I also got in touch with collectives that organize creative writing workshops for immigrants and refugees, in order to collect the community-published items which emerged from these collectives. In Toronto for example, the Sick Muse Art Projects runs a workshop for women immigrants which produces an annual zine.  A similar workshop was launched in 2017 across Toronto, Ottawa and Windsor to address domestic and sexual violence among immigrant populations. A graphic novel was born from this multicultural collaboration.

What did I get from this placement?

Apart from working on my project, I was given the opportunity to gain insight into the Library’s practices and to gain new professional skills. Here are a few of the things I did:

I also gained better insight into the contemporary publishing industry in the US and Canada (which benefits my PhD thesis too) and found, from the data I had collected, that:

To a certain extent, the American Collections’ holdings mirrored these publishing trends. Before I arrived, the BL already had most migrant narratives published by major publishers, but what was missing from its collection were the ones published by small presses. 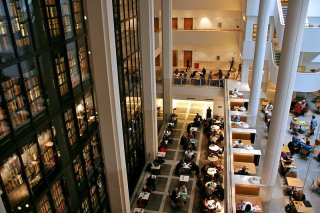 Now more importantly, how did my work contribute to the British Library?

The acquisition of books, archival material and the subscription to literary magazines I recommended will, hopefully, make the British Library’s holdings more representative of the North American multicultural literary scene.

The research I conducted identified areas of concern with the BL’s present holdings and collection practices in terms of migrant literature. One of my major findings was the gap in the Francophone Canadian literary holdings: established writers and publications by major publishers were absent for the catalogue. Another was the issue of web-based literature which we are not legally equipped to collect (I wrote about this here).

Because I have identified these gaps, the American Collections team are now aware of them and can strive to prevent them from widening even more. The report I have written, which presents my findings and offers practical suggestions for more inclusive holdings, will inform future collection practices and strengthen curatorial knowledge in this area.

On a final note, I would like to thank the Eccles Centre and the Americas Collections team for supporting my project and for their warmth, the Research and Development team for setting up these placements in the first place and organizing extra activities for us newcomers, and the European Collections team for welcoming me on their floor. I am especially grateful to my supervisor, Francisca Fuentes, for having given me such a fantastic opportunity and for her invaluable help and guidance throughout this project.

Laura Gallon was a PhD placement student at the British Library where she worked on a project assessing holdings of migrant narratives in the North American collections. She is in the second year of her PhD at the University of Sussex which is looking at contemporary American short fiction by immigrant women writers. Her placement was supported by the Eccles Centre for American Studies.

Posted by Francisca Fuentes Rettig at 09:12:00 in Eccles Centre

Posted by Francisca Fuentes Rettig at 9:12 AM