Last night, I had the distinct pleasure of joining the audience for the first performance of Jason Moran's latest work James Reese Europe and the Absence of Ruins at the Barbican.  The project is the third in a 'trilogy' which Moran has described as a 'long portrait of Harlem'.  All three have revisited key figures in the jazz history of the neighbourhood: Thelonius Monk (IN MY MIND), Fats Waller (Fats Waller Dance Party) and now James Reese Europe.  While the first two are familiar names to most people, few will recognise the latter.  This is an oversight that becomes increasingly disquieting the more one learns about Europe's musical, social, and military accomplishments.

At the British Library last week, Moran spoke with fellow jazz musician Soweto Kinch about his motivations for looking closer at James Reese Europe, and the many ideas that emerged in the process. 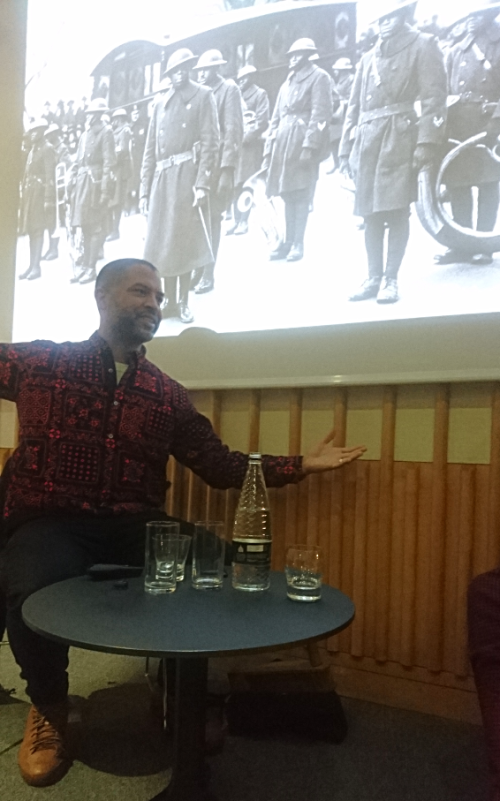 He highlighted how Europe is a pivotal figure in discussions of so-called 'proto-jazz'.  As well as being an exceedingly popular composer and bandleader, he was also an organiser and proponent for African American musicians.  His belief in and support for his professional community, and the nascent form of music that was emerging from it, was unwavering.  In 1910 Europe incorporated the previously informal Clef Club, which functioned as a venue and a society that supported the rights of professional black musicians. 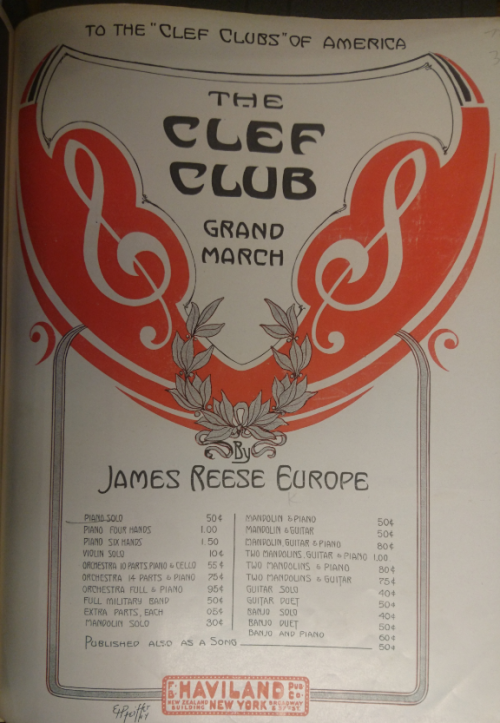 Two years later, he organised a concert at Carnegie Hall for the Clef Club Orchestra to raise funds for the Colored Music Settlement School at which solely music by black composers was performed.  By 1918, when he enlisted to serve in WWI, Europe was a well-recognised popular figure, whose musical scores sold in large quantities (the Library holds 70 of these). 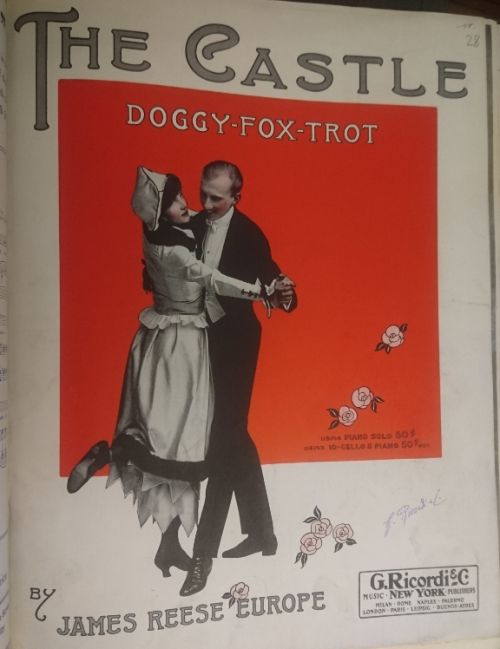 During his military service, Europe served as the bandleader for the 369th regiment who were deployed in France.  In a related symposium earlier in the day, Revisiting the Black Parisian Moment 1918-19, we had heard how US generals refused to deploy African Americans for active service, instead segregating personnel into supportive roles such as building camps and retrieving the bodies of fallen soldiers.  By contrast, the French had deployed colonial African soldiers and were prepared to fight alongside African Americans, especially as the casualty rate grew.  Consequently, Europe and the 369th saw action in France, for which many of them received the Croix de Guerre.  The music they performed took the country by storm, and a wave of professional musicians from both the US and the Caribbean (for example, Alexandre Stellio) were able to capitalise on this. 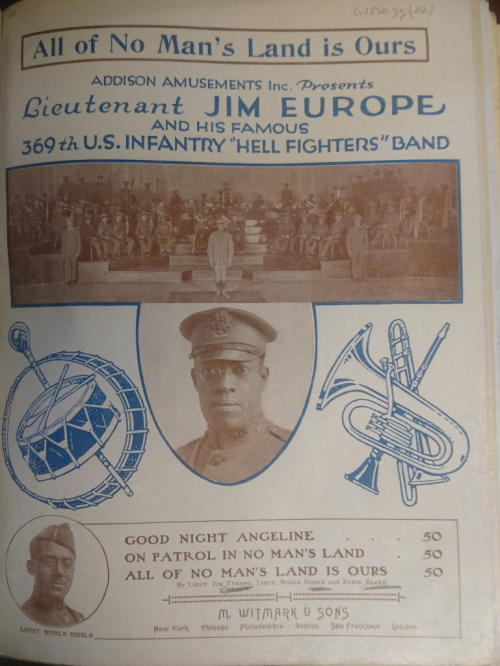 Returning home in 1919, the 369th received a hero's welcome with a parade along fifth avenue which saw hundreds of thousands turn out for the occasion.  With clear admiration of their professional ability and tenacity, Moran recounted how for the length of 80 blocks the 369th played as they marched in the New York February cold.  They played popular tunes that would be recognised by the mostly-white crowd, however upon reaching Harlem the music changed and they played in a style familiar to their fellow community members.  Moran highlighted how this encoded double-performance, that uses different styles and carries separate meanings for different audiences, has long been a strategy of black music which was historically used as a covert means of communication. 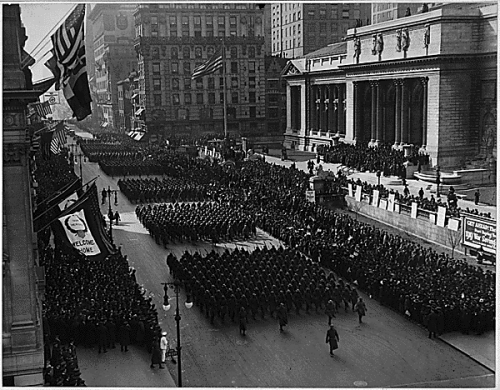 This observation sheds some light on the subtitle of Moran's project: An Absence of Ruins.  We were told how this emerged during an early conversation with filmmaker John Akomfrah, while Moran was in Rome with 'ruins everywhere'.  Akomfrah signalled the work of Caribbean-born sociologist, Orlando Patterson who has published widely on the historical and social legacies of slavery and underdevelopment.  Additionally, Patterson has authored three novels which explore these issues from a first person perspective.  His second novel is titled 'An Absence of Ruins' and itself borrows its title from the poem The Royal Palms... an absence of ruins by Nobel laureate Derek Walcott, quoted in the epigraph to Patterson's novel:

Here there are no heroic palaces

Nettled in sea-green vines or built

If art is where the greatest ruins are,

Our art is in those ruins we became,

You will not find in these green, desert places

One stone that found us worthy of its name,

Nor how, lacking the skill to beat things over flame

We peopled archipelagoes by one star.

For both Walcott and Patterson, the term 'an absence of ruins' becomes a cipher for the Caribbean's colonial legacies of racial violence.  Walcott makes allusions to how this is lived in experience ('Our art is in those ruins we became'), and Patterson takes this further.  Through the character of 'Alexander Blackman', Patterson describes the existential experience of living in a permanent condition of exile in order to ask what does it mean to have a history when that history is characterised by the ruptures of violence, oppression, and temporal and geographical dislocation?

In a central passage in the novel, Blackman experiences a crisis in which he fantasises about a Kingston built on ancient ruins rather than the bodies of slaves and the genocide of indigenous peoples.  This induces him to seek out his mother with the hope that she can perform a 'replanting of roots' by singing him songs.  Indeed, the novel proposes music as a potential solution to this problem of historical rootlessness associated with New World black memory.  The syncopation, improvisation, and encoded messages of jazz in particular are proffered as a language for modern black memory that isn't based on the traditional 'archaelogies' of knowledge and memory.

Weaving together these various concerns - black memory, historical absences, James Reese Europe's overlooked legacy, the black language of jazz in its social context - Moran followed  in Europe's footsteps as bandleader and educator by working with young musicians from London based community music education group Tomorrow's Warriors.  Jointly, they paid tribute through a deeply moving and joyful call and response to this extraordinary man, the musicians of the 369th infantry, and to jazz in an evening of musical evocation, transmission, and evolution. 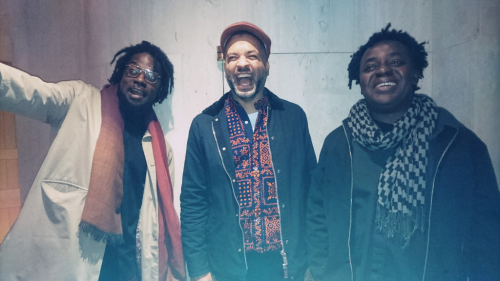 Jason Moran will be performing James Reese Europe and An Absence of Ruin at Cardiff on the 31 October and Paisley on the 4 November.