The OED defines an interlanguage as ‘An artificial auxiliary language’ or ‘A linguistic system typically developed by a student before acquiring fluency in a foreign language, and containing elements of both his or her native tongue and of the target language’. For me, this doesn’t quite cover the geographical and cultural circumstances from which many hybrid languages originate, especially around border areas. For example, the term ‘Spanglish’ could describe: a) the language spoken by an American teenager of Mexican origin, freely mixing English words into Spanish grammatical structures; b) a native English speaker, in the US or elsewhere, attempting to speak incomplete or imperfect Spanish; or c) the common language spoken between a Mexican and an American in a border town such as El Paso or Laredo.

Whatever the definition, the inherently unstable nature of interlanguages (Wikipedia lists hundreds of them, including Camfranglish, Scots Yiddish and Greeklish), makes it hard to think imagine them having clear rules, let alone a literature. The Portuguese/Spanish hybrid predominantly spoken on either side of the borders between Brazil and Uruguay, Paraguay or Argentina doesn’t even have a single spelling, as the choice between ‘Portuñol’ and ‘Portunhol’ depends on what you consider to be the ‘default’ language. What’s more, it varies hugely even in this (relatively) small area. Linguists have shown that, as well as a language used for communication between people who speak what are ultimately fairly similar languages, there also exist settled dialects of Portunhol spoken in the home and within communities in Northern Argentina and Uruguay.

This got me thinking how on earth one would translate it into English, which led me to wonder if there was any literature actually composed solely or principally in Portunhol. Thanks to Twitter, I know the answer is yes, and the foundational text of this literature is the Brazilian writer Wilson Bueno’s Mar Paraguayo (Paraguayan Sea). 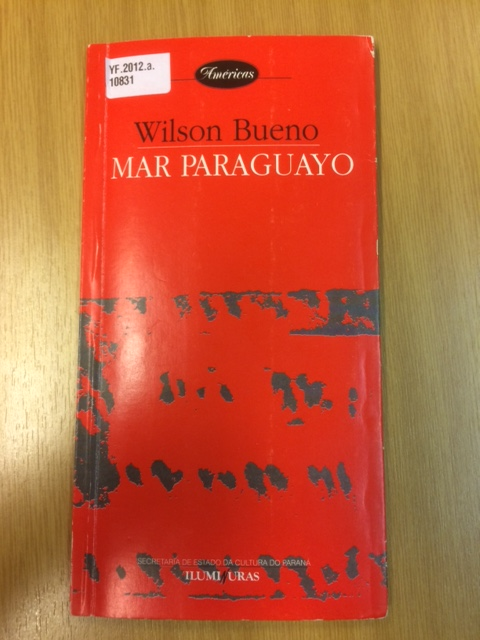 Bueno’s novella is not exactly an ‘authentic’ depiction of Portunhol, rather an impressionistic idiolect semi-devised by the author, befitting the oxymoronic title (Paraguay is infamously landlocked). In truth, it is a mixture of three languages: Spanish Portuguese and Guaraní, the indigenous language spoken by nearly 5 million Bolivians, Brazilians and especially Paraguayans. It is completely unique to dip into:

I’d say the grammar and syntax is closer to Spanish, but there is a fairly equal mix of vocabulary, with the Guaraní words relating to death, life and damnation less frequent but of key importance. Interestingly, the phrase ‘el deseo de siempre e sempre más e mais amor’ includes both the Spanish and Portuguese words for ‘always’ and ‘more’. 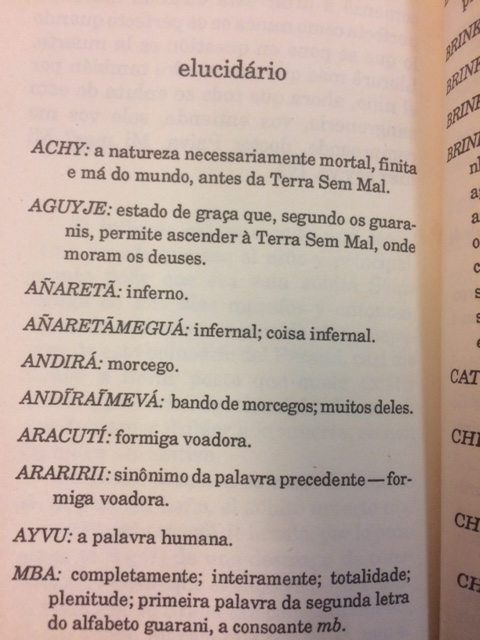 As to how we translate this, well the answer is just as open as the language itself. The translator of Mar Paraguayo into English, Erin Mouré, is Canadian, and rather than creating some convoluted way of mirroring Spanish and Portuguese in English, she has chosen to go with her own local equivalent, a mix of English and French. The Guaraní words (as unfamiliar to the average English speaker as they would be to most Spanish and Portuguese speakers) have been left as they are, which helps maintain a sense of place. The results are fascinating:

‘la ancestral speech of fathers and grands-pères that infinitely vanishes into memory, they entertain all speech et tricot: these Guaraní voices eternalize so simply as they go on weaving: ñandu: there is no better fabric than the web des leaves tissées all together, ñandu, together and between the arabesques that, symphoniques, interweave, in a warp and weft of green and bird et chanson, in the happy amble of a freedom: ñanduti: ñandurenimbó:’

So I ask myself, were I to translate a story or poem from Portunhol/Portuñol what solution would I go for? I suppose the fact that I live in the capital (Cardiff) of a bilingual country could help, and the closest thing I have to an interlanguage is the Welsh-English pidgin I occasionally use with my daughter, her teachers and other patient Cymraeg speakers. If every English translator living geographically close to another language were to do this, a great number of wildly differing translations could be produced, all equally valid. My translation, Paraguayan Môr, coming soon. Watch this space…

Posted by Annalisa Ricciardi at 10:43 AM