Cats from the stacks: The Cat in the Hat

Not that one ever really needs a reason to look at pictures of cats, but when the Library put on the Cats on the Page exhibition in 2019, it seemed like as good a time as ever to explore some favourite literary felines. Please prowl forward: Dr. Seuss’s ‘Cat in the Hat’…

Theodor Seuss Geisel’s (that’s Massachusetts-born Dr. Seuss to you and me) bolshie yet lovable Cat, was the result of a challenge put to the author to write a children’s book using a vocabulary of no more than 225 words. Giving Seuss a list of words, William Spaulding, director of the education division at publisher Houghton Mifflin, threw the gauntlet (or at least the children’s-book-world-equivalent):

And accept that challenge Seuss did. 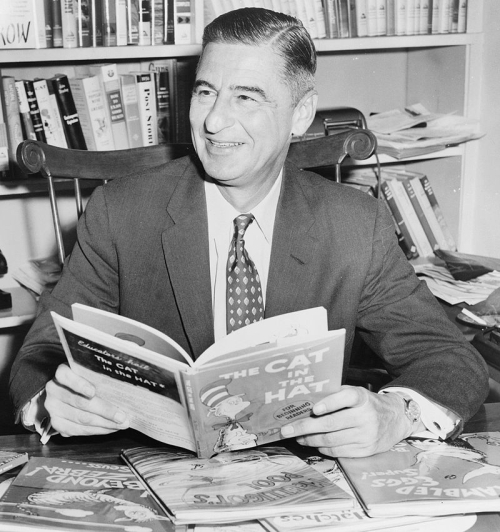 A quick recap for those who don’t know: two children are left home alone one rainy day. Peering through the window and pondering what they’re to do while Mother is out, Cat’s arrival is signalled with a ‘BUMP!’. Ignoring the warnings of their pet fish (who, let’s face it, was probably never going to be a fan of a cat in the house even if he were as inconspicuous as they come), the children let Cat stay and chaos ensues. Elaborate balancing acts fail and a box of kite-flying Things cause disarray while the omniscient fish looks on despairingly.

The title itself came at a point of desperation for Seuss:

‘I was desperate, so I decided to read [the list] once more. The first two words that rhymed would be the title of my book and I’d go from there. I found ‘cat’ and then I found ‘hat’.’ (Theodor Seuss Geisel, author interview as quoted by Morgan, Dr. Seuss & Mr. Geisel, p 154)

It was through the sketching of Cat that things began to fall into place for the storyteller. Cat’s upright posture, slightly protruding tum, trademark headwear and ‘red bow tie tied in three impossible loops’ (Morgan and Morgan, Dr. Seuss & Mr. Geisel, p 155) are instantly recognisable today. And hands up who else had never noticed that little quirk with the bowtie? 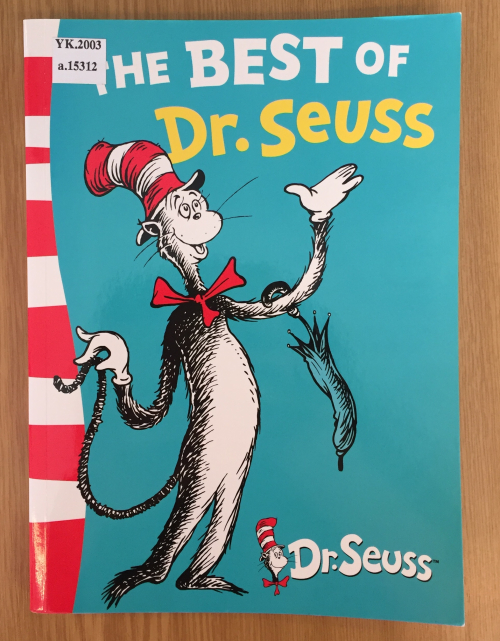 With Cat, it’s been said that Dr. Seuss wanted to create a character that, although was crafty and (slightly) shambolic, was still himself surprised whenever he messed up (Morgan, Dr. Seuss & Mr. Geisel, p 155). It’s this that gives Cat his endearing charm and keeps readers revisiting his capers.

And like all regretful moggies who come back with their tail between their legs, he does make good in the end – pootling in to speedily execute a ‘nothing-to-see-here’ clear up as Mother strolls along the garden path back to the house. Between the appealing rhythm and rhyme young readers are left with that very sagacious takeaway; you may mess up, but you can put things right again. Now there’s some wisdom to bring with you into adulthood. Thanks, Cat. 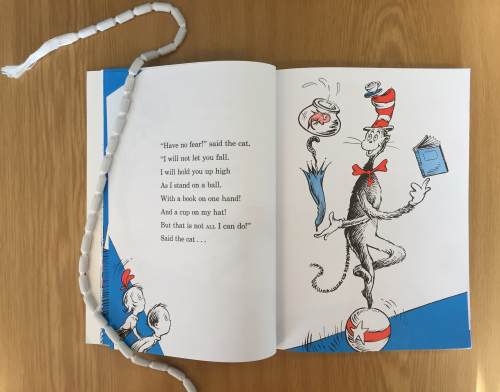 Speaking of that compelling rhythm that flows through the pages of Cat in the Hat, the skill in Seuss’s wordplay is made all-the-more impressive when you observe the lack of adjectives in the poem, something that Spaulding didn’t provide in great abundance when he gave Seuss the list of words to work from. ‘…[T]he limited vocabulary posed excruciating complexities in rhyming’ Morgan explains (Dr. Seuss & Mr. Geisel, p155) but Seuss’s ability prevailed, leaving us with that unique bounce of page-turning words that continues to entertain over half a century since they were first penned.

Within the first three years of its publication the tale had sold close to one million copies, been translated into other languages, and been produced in Braille (Morgan, Dr. Seuss & Mr. Geisel, p 156). Over 60 years later it remains a staple on the bookshelves of young children (and big kids) around the world.

Not one to be put off by a slightly tricky experiment, Seuss’s proficiency was pushed even further when it was later put to him to create another children’s book using a vocabulary of just 50- words. But we’ll save Green Eggs and Ham for another time.

See a bold full-colour 1957 edition Cat in the Hat, complete with Seuss’s iconic illustrations at Cats on the Page. Our free Entrance Hall exhibition celebrating cats and their capers from rhymes and stories through history is was open November 2018 to January 2019. Items from the exhibition are due to be on tour around the UK during 2020. Keep an eye on the British Library social media channels for updates.

(Blog by RSW, currently on an Americas team curatorial placement and feeling rather pleased at managing to sidestep the plethora of puns that could have weaved their way into a cat-related post.)