To Edgar, from Aubrey: bringing Poe’s tales to life

Gothic author Edgar Allan Poe was born on 19 January 1809 in Boston, Massachusetts. To mark this moment 210 years ago, I took to the collections to explore some of the most iconic illustrations of his stories, and of the man himself.

For some time I’ve been rather taken by Aubrey Beardsley’s illustrations of Poe’s mysterious and startling tales; his style seemingly a perfect fit for some of Poe’s most grotesque and alarming scenes. Privately printed in 1926 in Indianapolis, Illustrations to Edgar Allen Poe (British Library shelfmark 7852.t.19.) features a striking golden cover and contains an array of Beardsley’s interpretations of Poe’s work including images for ‘The Black Cat’, 'The Mask of the Red Death', and ‘The Murder in the Rue Morgue’. 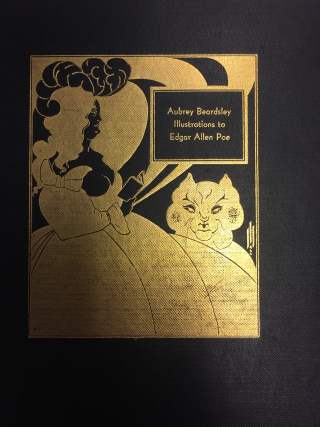 Beardsley, born in Brighton in 1872, was said by poet, critic and friend Arthur Symons, to have had ‘a more personal originality of manner’ and ‘so wise an influence on contemporary art’ (Aubrey Beardsley by Arthur Symons, London: At the Sign of the Unicorn, 1898, page 13) than any other artist of his day (‘certainly whose work has been in black and white’ Symons states).

Maybe it’s the darkness of Poe’s twisted tales that suit Beardsley’s bold black ink drawings. One of my favourites from the book pictured above is of the unnamed narrator in ‘The Fall of the House of Usher’, possibly of the scene at the beginning of the tale as he approaches the doomed house by the lake. The darkness from above encroaching into the frame (a sign of the impending tragedy perhaps) while his composed demeanour and regal dress are a stark contrast to the dishevelled character we see fleeing the scene by the end of the story. 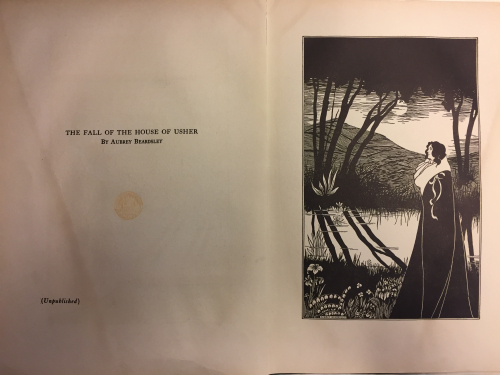 As a certified cat lover (demonstrated in my previous cat blog), I tend to gravitate towards anything moggy. Despite the gruesome events of ‘The Black Cat’, Poe’s Pluto is no exception. In Beardsley’s interpretation, the feline protagonist sits atop a female – the murdered wife of the troubled narrator maybe – brazenly displaying his one-eyed face which was the result of the furious hand of his master. And, in what some would see as true cat fashion, wearing a distinctly unimpressed expression.

The evil eyebrows probably provide invaluable evidence for the ‘why cats can’t be trusted’ argument of dog people all over the globe. (Can cats be trusted? Make up your own mind with a visit to our Cats on the Page exhibition.) 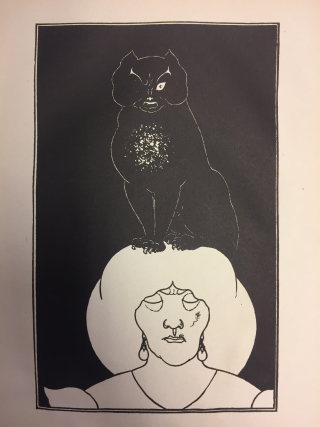 While carefully leafing through the pages of this precious item (which is one of only 107 printed for Members of the Aubrey Beardsley Club), it’s impossible not to pause on Beardsley’s portrait of Poe. Through dark and solemn eyes, to me Beardsley certainly manages to convey something of the troubles and torments Poe experienced in his lifetime. 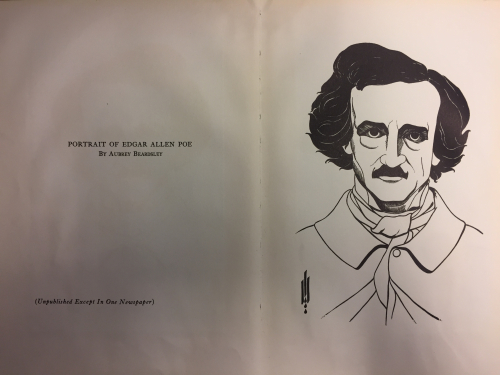 Portrait from ‘Illustrations to Edgar Allen Poe’ by Aubrey Beardsley

Perhaps the most arresting of the illustrations in this book is a self-portrait of Beardsley (spelled Bearsley in the caption) with Poe’s Raven in the backdrop. 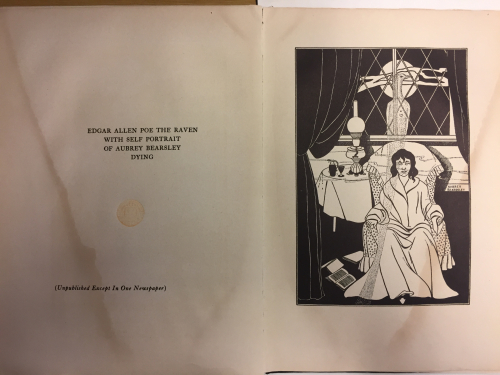 Both author and illustrator had untimely deaths (Poe died aged 40), with Beardsley’s talents lasting only until he was 25 when he died of tuberculosis. Symons recalls meeting with Beardsley during his sickness and seeing him ‘lying out on a coach, horribly white’ (Aubrey Beardsley by Arthur Symons, page 7). A description hauntingly similar to the figure of Roderick Usher in the opening of Poe’s tale, who we’re told is ‘lying at full length’ and has ‘a cadaverousness of complexion’ (The Fall of the House of Usher and other writings edited by David Galloway, Penguin, 2003 ELD.DS.195031, pages 259.1-260.5). Even the setting here has a likeness to the House of Usher where ‘Dark draperies hung upon the walls’ and ‘Many books…lay scattered about’. (The Fall of the House of Usher and other writings, page 259.1).

Although Symons goes on; despite his illness Beardsley was still ‘full of ideas, full of enthusiasm’ (Aubrey Beardsley by Arthur Symons, page 7) something perhaps illustrated in this self-portrait – the wine on the table a sign of life’s little indulgences and the scattering of books on the floor and Raven appearing at the back of Beardsley’s mind implying that his lust for art, reading and writing was far from dying even as his physical health deteriorated.

Our friends over in the European Collections have more on some of the flights of Poe’s Raven and Beardsley, ‘the British master of Art Nouveau’.

Aubrey Beardsley by Arthur Symons, London: At the Sign of the Unicorn, 1898

The Fall of the House of Usher and other writings: poems, tales, essays, and reviews by Edgar Allan Poe edited with an introduction and notes by David Galloway, Penguin, 2003 (BL Online Resource DRT ELD.DS.195031)