A man of his word: Abraham Lincoln and the Proclamation of Emancipation

Abraham Lincoln was born on 12 February 1809 so we're taking a moment to shine a light on the 16th president of the United States of America through a new acquisition.

President Lincoln was responsible for issuing of the Emancipation Proclamation which declared forever free those slaves within the Confederacy in 1863. When a c.1865 edition of the Proclamation recently arrived in the Americas office for cataloguing, it did more than slightly pique the interest of the little historian/wannabe typographer/lover-of-all-things-beautiful inside of me. 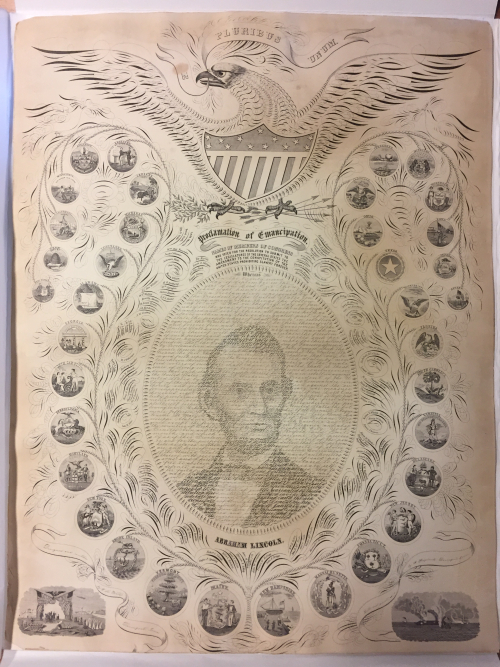 Proclamation of Emancipation with calligraphic portrait of Abraham Lincoln, circa 1865

Designed and written by William H Pratt and printed by Augustus Hageboeck in Iowa, the delicate broadside features the Emancipation Proclamation text in a detailed calligraphic portrait of Lincoln, beard and all (for those hankering for more handwriting goodness, our Writing: Making Your Mark exhibition is open until 27 August 2019). Hageboeck used lithography to create this masterpiece – a process in which ‘lines are drawn with greasy ink or crayon on a specially prepared limestone, which is then moistened with water; an oily printer's ink, applied to the surface of the stone with a roller, is attracted to the image. This is then printed on to the paper under pressure.’ (R J Goulden, Aspects of the Victorian Book, Lithography in the Victorian age)

Is this the epitome of ‘embodiment’? A number of features can be seen within the impeccable writing of the portrait including wider spacing to create a ‘lighter’ effect of the backdrop and Lincoln’s shirt, bold font to create his hair, and a shadow is added to give an even darker result for Lincoln’s suit. Look closer still and extra curvature is added to the lettering to create the effect of the eyes. Interestingly over the eyes, the key words ‘That on the first day of January, in the year of our Lord one thousand eight hundred and sixty-three…’ can be seen. Possibly suggesting Lincoln’s looking ahead to a new time in the United States; his vision becoming reality and signifying a monumental shift for the nation.

The observations to pick up are seemingly endless. Further particulars include a banner depicting a rather fierce looking American eagle, illustrated seals of the States, and within the inner circle, the names of the members of Congress who supported the Constitution’s 13th Amendment. 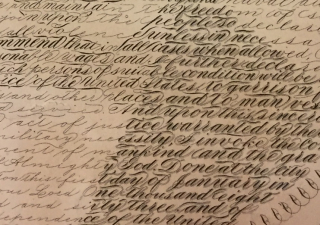 A contrast of techniques create the details of the portrait including varied spacing between words, bold and shadowed fonts

It’s in the eyes: elaborate shaping of lettering creates the president’s features 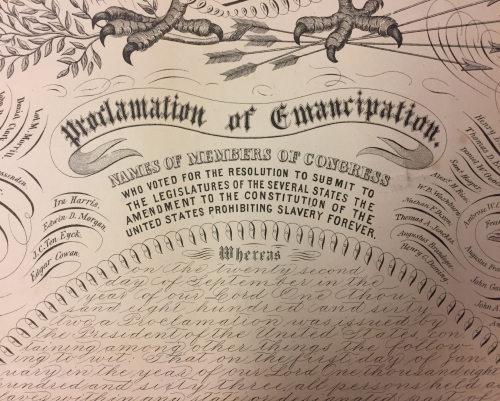 Illustrated seals of the States

Possibly produced for propaganda purposes, Lincoln here embodies his famous words. The calligraphic portrait demonstrating a unity between the subject and his work, almost giving more gravitas to the words themselves rather than the hero who issued them. The words quite literally shape the man.

This brief introduction barely touches the surface when it comes to the level of detail to be explored in this telling item. It’s sure to provide an interesting primary resource for researchers intrigued by its history, printing and design techniques, and the story of the man at its centre. We’ll be sharing the shelfmark details as soon as the item is available in the Reading Rooms.