Witch-hunts and the iconographic power of fear

Lost among other headlines, today brought news of a fascinating discovery in the Cresswell Crags in the British Midlands: approximately 1000 apotropaic markings, also known as witches markings.  Research is ongoing by Historic England to understand more about this latest discovery at the Crags, but it seems as though they belong to a rich history of markings made to protect against witches.  Typical markings include "the double 'VV' engravings, which may make reference to Mary, Virgin of Virgins and PM is Pace Maria.  Other designs are believed to be devices for capturing ‘evil’. These include diagonal lines, boxes and mazes and could be a response to a period of unexpected sickness, death or poor crops".

Given this latest witch related discovery, it seemed appropriate to introduce readers to a new acquisition by up-and-coming New York based illustrator and book artist Normandie Syken, "Little Red Witch" which shall be available in the reading rooms very shortly, at shelfmark HS.74/2395 .  This rather large yet exquisitely detailed book is a contemporary re-telling of the infamous Brothers Grimm tale, with a twist: the story is set in Salem, Massachusetts during the 17th Century witch trials that saw 185 people accused of witchcraft in a one-year period, resulting in 59 trials and 19 executions.  By far the vast majority of the accused were women, and where men were accused it was most often by association with a female witch (usually a family member). 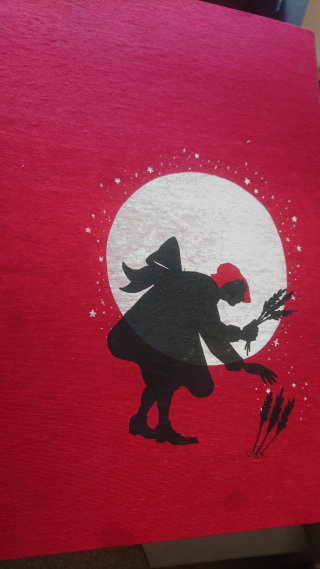 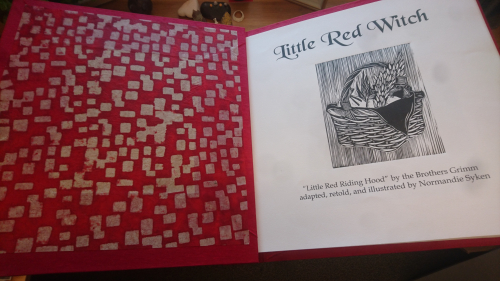 This is, then, clearly not going to be your average fairytale.  Our witch heroine is sent from Salem to her witch grandmother's cottage in the woods to wait out the anti-witch hysteria overtaking Salem with her loyal companion, an unnamed black cat. 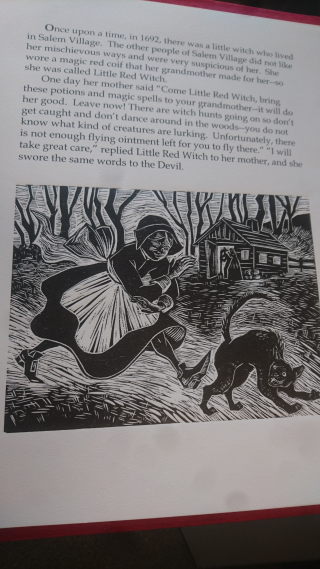 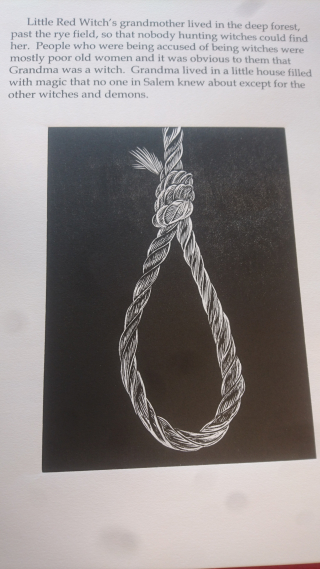 En route, she enjoys the freedoms offered by the woods to celebrate her true witch nature, along with new-found woodland friends with whom she shares a midnight dance around a fire.  Amongst the revellers is a wolf of whom our heroine is far from intimidated, recognising in him a fellow in the dark arts. 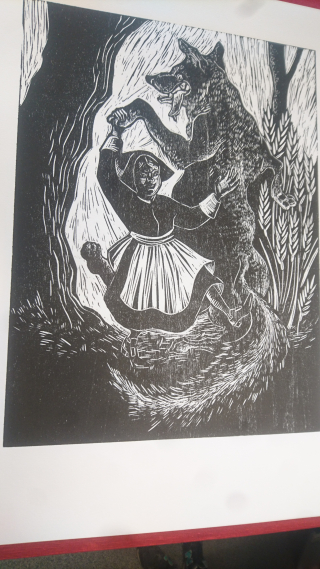 Nonetheless, the wolf betrays her confidence and so the book returns to the more familiar narrative of 'Little Red Riding Hood'. 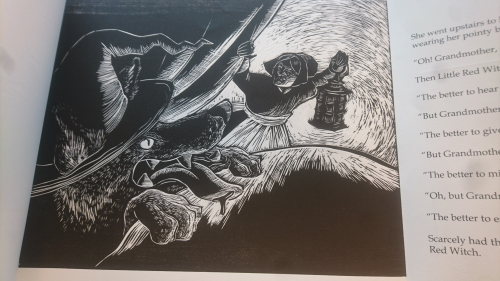 "What big teeth you have"

However, this only lasts a short while before further twists on the narrative are introduced.  Notably, there is no woodcutter to save the day.  Instead Little Red and her grandmother apply their witch knowledge and cunning to save themselves from their seemingly terrible fate. 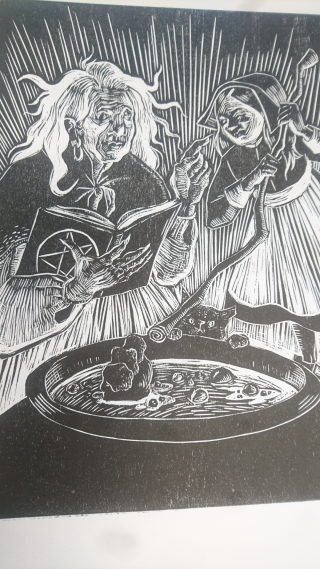 What is particularly interesting about this retelling is how a number of themes that emerged from the Salem witch trials are integrated into the narrative.  Some of these, such as the ever present black cat, broomstick, and cauldron are now instantly recognisable elements of the popular imagining of witches.  Others are less iconographic: single women, particularly spinsters; inherited inter-generational witchcraft; an ability to commune and speak with animals; familiarity with herbal remedies; speaking with the Devil; causing harm through poppets (doll-like effigies); the power of words to curse; and of course the symbols of witchcraft which have their counterpoint in the protective markings seen at Cresswell Crags.  While some of these may not have appeared in a 'Family Fortunes' list of witches' traits ('Family Feuds' for our US readers), they are nonetheless all uncannily familiar.  Such is the power of historic narratives to traverse centuries, particularly those that invoke fear of the unknown and suspicion of difference.

It should come as no surprise then that all of the above can be found in the historical record as anecdotal evidence used to accuse people of witchcraft, both in witch-hunts in Britain and those that took place in the American colonies.  The imagined threat of witches clearly posed a very real danger to individuals and society in the early modern period. Estimates of numbers of people who were killed during European witchhunts vary from 40,000 up to 500,000 over 300 years.

Of course, much of the 'identifying' characteristics of witches were heavily gendered: women's work and women's words were read through a sinister lens.  As Carol F. Karlsen groundbreaking sociological history of the Salem witch trials details, "witchcraft played a critical role not only in shaping, maintaining, and describing [the social structure of New England], but in reconciling men's feelings about women with the demographic, economic, religious and sexual changes of the time."  They are words that are important to reflect on, particularly considering that witch-hunts continue to be a present threat in some areas of the world where women continue to be at highest risk of persecution.

Read in this light, 'Little Red Witch' reclaims the negative connotations of witchcraft, which Normandie Syken uses to carve her very own mischievously dark fairytale, and a formidable heroine in 'Little Red'. NB: The author gifted several prints from the book upon acquisition.  As these are contained within the book, and with the author's permission, we felt it appropriate to donate these to another home where they have the opportunity to be seen by a wider audience.  We are pleased that the Glasgow Women's Library will shortly be the new home to these prints, together with a spare copy of Karlsen's book to provide a little more context.

Images on this page are all reproduced with permission of Normandie Syken, with whom copyright remains.  We kindly ask that you please respect this.

Carol F. Karlsen, The Devil in the Shape of a Woman: Witchcraft in Colonial New England. British Library shelfmark YH.1988.a.422