November 2018 – March 2019 saw the Library run the free exhibition 'Cats on the Page', which celebrated our feline friends in literary and illustrated form.  It thus seemed appropriate to share two of our favourite cat-themed books with you.

One of his lesser known works, Andy Warhol's 25 Cats Named Sam and One Blue Pussy is a soul-warming depiction of the twenty-six cats that co-habited with Andy Warhol and his mother, Julia Warhola in their New York apartment.  Beautifully illustrated by Warhol, it is accompanied by his mother's distinctive script. 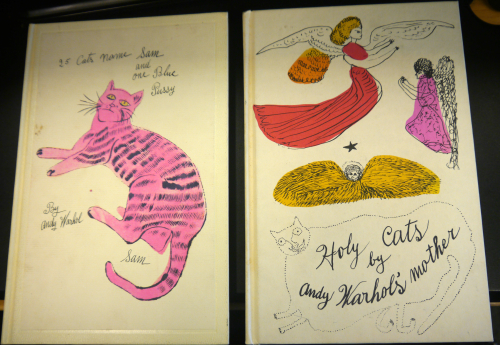 Alongside this volume sits Holy Cats by Andy Warhol's Mother, which is illustrated in full by Julia.  Holy Cats opens with a dedication: "This little book is for my little Hester who left for pussy heaven".  The legend goes that the 25 Sams were acquired so that Hester wouldn't feel lonely.  Looking through the works, the influence of Julia's distinctive illustrations and creative imagination on her son is readily apparent.  Indeed, Warhol regularly worked with her throughout his illustrative and design career, both before and after his meteoric rise to fame in the art world. 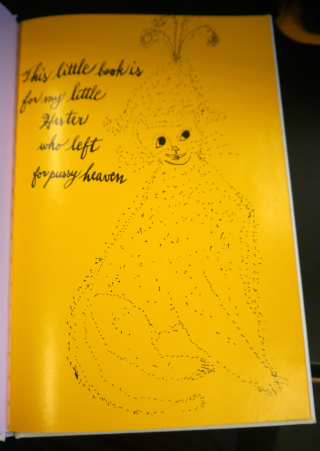 Retellings of Andy Warhol's life are full of myth, and it is often difficult to decipher fact from fiction, and from deliberately self-perpetuated fantasy.  Perhaps one of the more widely favoured versions of Warhol is of the publicly celebrity-obsessed yet socially-awkward recluse.  More recently, Olivia Laing has written about Warhol within a lineage of artists who struggled with social acceptance and meaningful communication, whose works speak of and to the loneliness that accompanies this.  She describes Warhol thusly:

The loneliness of difference, the loneliness of undesirability, the loneliness of not being admitted into the magic circles of connection and acceptance – the social and professional groupings, the embracing arms.  Another thing: he lived with his mother.  In the summer of 1952 Julia had arrived in Manhattan… Andy had recently moved into his own apartment and she was anxious about his ability to care from himself.  The two of them shared a bedroom, as they had when he was a sick little boy, sleeping on twin mattresses on the floor and re-establishing the old production-line of collaboration.  Julia’s hand is everywhere in Warhol’s commercial work; in fact her beautifully erratic lettering won several awards.  Her housekeeping skills were less pronounced.  Both that apartment and the larger one that followed quickly degenerated into a state of squalor: a smelly labyrinth filled with wobbling towers of paper, in which as many as twenty Siamese cats made their homes, all but one of them named Sam.

It leaves a sad impression of one of the Twentieth-Centuries most recognisable artists, which is driven home by the vision of cat-filled squalor and over-protective mother.  Indeed, owning multiple cats is often seen as a sign of personal decadence.  And yet, when one reads 25 Cats Named Sam and Holy Cats, this is decidedly not the impression that one is left with. 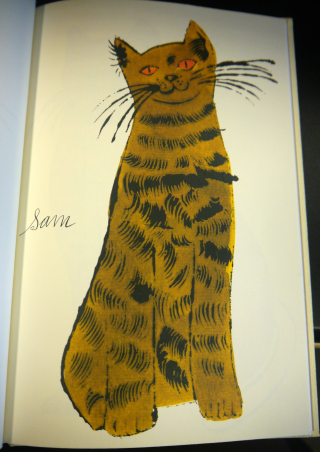 One of the Sams 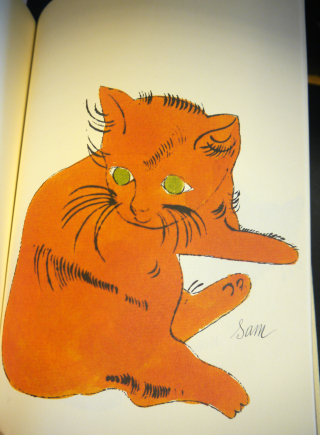 The 25 Sams may share a name, but they each have distinctive portraits and in many ways it is perhaps Warhol's warmest work and is suggestive of companionship and familiarity rather than an existential loneliness.  These are also playful books, with a distinctly tongue-in-cheek self-awareness and a dry humour that is shared by mother and son. 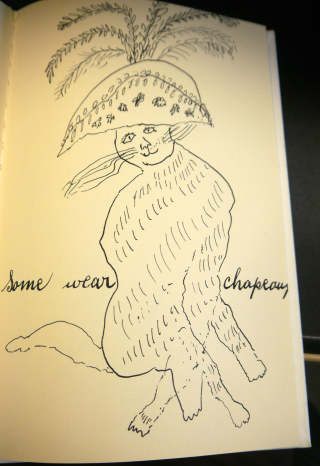 Some cats go to heaven, some wear chapeaux 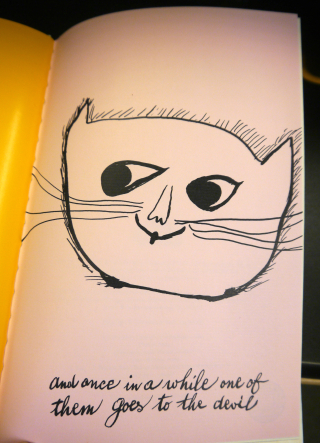 This is the memory that Warhol's nephew, James Warhola, an illustrator in his own right, has of his uncle and grandmother's living arrangements:

Andy was always portrayed as disconnected from his family, but this was definitely not the case. He was close to the family he had, his two brothers and their kids. Some biographers have' written that he kept his mother in a basement, like a dungeon, and I always found that odd. My grandmother lived in a beautiful apartment on the ground floor, and we hung out in her kitchen and living room.

Andy was playful, and he laughed a lot. He would always buy us gifts. There was a magic shop in Times Square, and he would get us cameras with birdies that popped out; he had an affectionate side. But it was important for him to keep up his persona, with the sunglasses and the silverish wig. He tried to stay in character.

These are the memories that he records in two children's books he has made about his uncle.  From the perspective of a child, they give a very different insight into Warhol's private life. 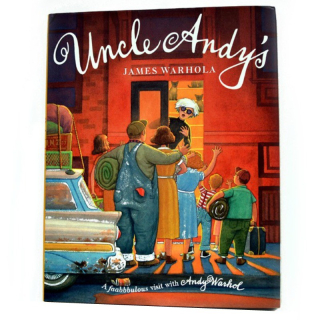 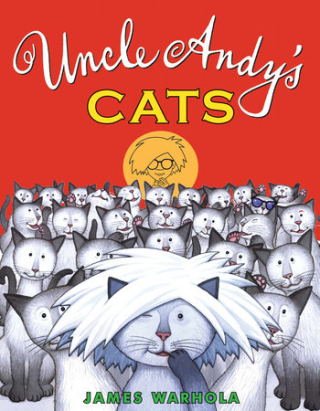 Read alongside Warhol's and Julia Warhola's books, one here gets the sense that Warhol's private family life was rich, and that cats provided additional companionship for both mother and son, as well as playthings for young nephews.  While their living arrangements could be seen as alternative, by looking at these without preconceptions, we get a fuller picture of the lonely socially-awkward artist we might be looking to find.

In memory of Matthew Neill, former curator for Australasia and English Language Asia, and cat-lover.

The North American collections section is currently recruiting for a PhD student to work on a Collaborative Doctoral Partnership PhD focusing on Indigenous languages in the post-1850 print collections.  The student will be supervised jointly by Professor Joy Porter at the University of Hull (see separately the 'Treatied Spaces' project underway there) and Dr Francisca Fuentes Rettig, curator for the North American collections at the British Library.  Additionally the student will have access to a wider support team consisting of Indigenous academics and experts in Indigenous languages, and training opportunities in languages, digital humanities, and more.

The Library has a rich collection of materials from North America in Indigenous languages.  Thanks to detailed research by our Library colleague Adrian Edwards, there is a clear record for earlier publications particularly for early Eastern Algonquian languages and early Northern Iroqouian languages.  The latter article also covers print materials up to 1900.  Additionally, we know from our internal cataloguing system that we currently have catalogue records for publications in approximately fifty North American indigenous languages.  Given that we know that there are 296 indigenous languages in North America, it is clear that significant gaps in our holdings knowledge remains.  These gaps are partly due to the nature of large historic collections with multiple origins, and the processes of libraries.  For just one example, materials predominantly in English or French language, and which contain Indigenous languages do not always clearly indicate this in catalogue records.

Another challenge is the sheer diversity of languages across North America, as well as the complexities of language cross-overs.  In the US particularly, the historic movement of languages from traditional geographical territories was a consequence of government policies of forced relocation. Policies of forced assimilation further impacted on the decline of some languages. 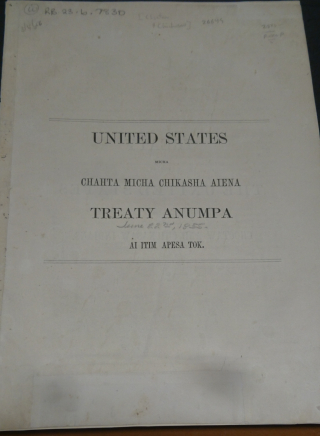 Treaty between the United States and the Choctaw and Chickasaw Indians, shelfmark Rb.23.b.7830 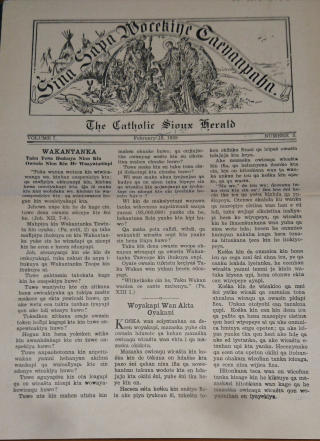 From an information science perspective, Library systems and catalogues have of course developed historically from and within Western systems of classification of knowledge.  As such, they do not necessarily respond to the complexities of these languages and the cultural sensitivities associated with them.  Finally, the specialist knowledge that would be required to conduct a comprehensive assessment of materials is sparse in the UK. 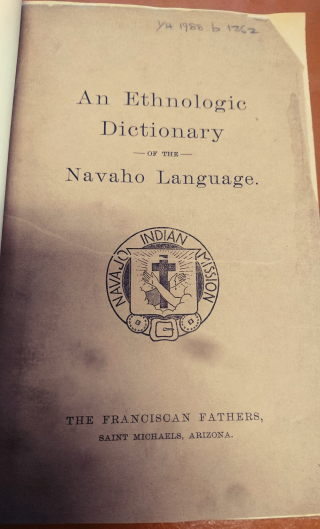 However, we are thankfully not starting from scratch.  Vital lessons can be learnt from our library and archives colleagues in the US, Canada, and Australasia.  In the last decades substantial amounts of research has been conducted in the field, which has seen critical interventions made by Indigenous library and information science (LIS) professionals and researchers who have developed the theory, tools, and methods to recalibrate information management systems.  They have done this with the needs of Indigenous materials in mind, working closely with communities. 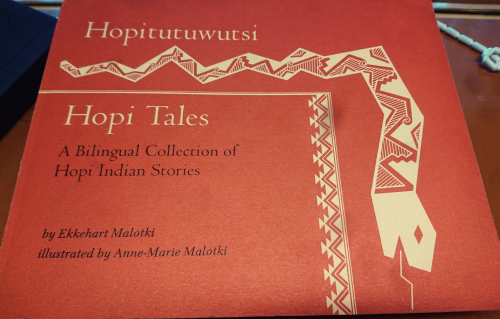 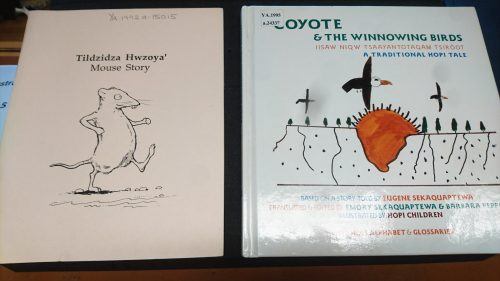 Of particular interest are open source digital humanities projects, such as the Mukurtu platform.  Projects such as these are a major part of the effort to revitalize Indigenous languages and cultures to ensure their longevity for future generations of tribes.  Given that many languages have already died, and many more are on the UN's critically endangered list, this is important and time-sensitive work.  The new approaches present interesting challenges to a large international institution that uses massive knowledge-systems, has standardised practices, and is responsive to the growing demand for digital materials and data.  Yet, we would be remiss to see this as anything other than an important opportunity, both in intellectual and ethical terms.

It is our sincere hope that this CDP will signal the start of a longer journey towards reconsidering how we work with existing Indigenous language collections, and build a clear rationale for if, how and why we acquire such materials for future collections.  Central to this longer-term project will be open conversations with tribes.  However, the first step is to rationalise and complete existing collections knowledge so that we have a comprehensive picture of the languages and kinds of materials that we hold, so that we can identify who we need to approach.  We also need to review how existing digital humanities projects might work in a specific British Library context, and what practical challenges we could expect.  The Collaborative Doctoral Placement will play an important part in this process and, we hope, be received as a signal of our commitment to this project through the training of research, LIS, and cultural institution professionals in the UK who can carry this work forwards in future.

For any enquiries regarding the PhD opportunity, please refer to the information on our website.  The deadline for applicants is April 15.

For interested parties who do not meet the eligibility criteria of our funding body, please see the Eccles Centre website for details of alternative funding opportunities, collection guides, and bibliographies.

As lead curator of the BL’s recent exhibition Windrush: Songs in a Strange Land  I had the great honour to meet and work with Andrea Levy. It is with great pain and heavy sorrow that I write this blog in the wake of her death. The loss of Andrea Levy from the world has left a deep wound.

Our first meeting involved a passionate conversation about the importance of history, the need to uncover the stories of everyday people’s lives, and to re construct the ties between cultures and places that have been severed through time. We talked in particular about Caribbean history, and her research into her own family history as well as the process of writing Small Island and Long Song. 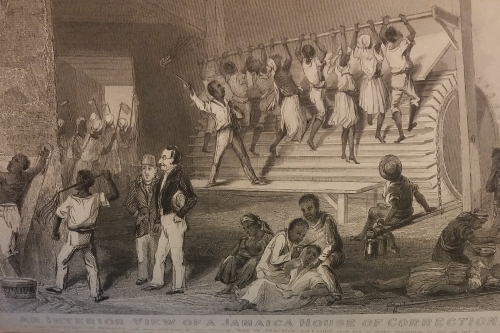 I was deeply moved by the exchange. We both communed about the fact that our collective ability to (re)confront and (re)construct the histories of colonialism, slavery, and struggles for freedom was vital to changing our present world for the better. We discussed the urgent need for those of us who work in the cultural and heritage sector to cultivate new ways of understanding the world, and ourselves. And I felt we both understood our collaboration on the ‘Windrush’ exhibition as part of this work.

As ever, Gary Younge puts it eloquently in his Guardian piece:

“It always felt to me as though Andrea became more driven the closer she came to the end. Keen to broaden the British historical gaze beyond its borders, particularly to the Caribbean, she became increasingly frustrated with the limited and limiting imaginations of media gatekeepers when it came to the Caribbean and slavery. Resolving to use the currency she had now gained to expand our historical literacy, she pushed at every meeting and every level for a fuller, more rounded, more inclusive version of our national story.” 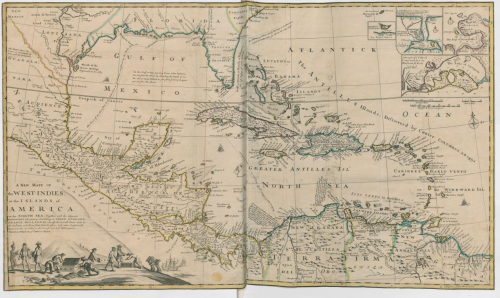 'A new Map of the West-Indies, or the Islands of America in the North Sea, together with the adjacent Dominions,’ (London: 1740) Shelfmark: K.TOP.123.7

Andrea Levy ‘s legacy is in many ways  a challenge to us all to take on the necessary, at times painful, and beautiful work of creating a more just world by creatively confronting and transforming history. - E.C.