A Tour of Indigenous London

On July 22nd, the Eccles Centre was pleased to host a group of students from the University of British Columbia’s Institute for Critical Indigenous Studies, who were visiting London as part of their course led by former Eccles Visiting Fellow, Professor Coll Thrush. The plan for the day, however, was a little bit different from our usual student visit days. As part of our work with the Beyond the Spectacle project, we wanted to go beyond the usual collections display and highlight research being done on these collections and how students and members of the public could take a lead role in disseminating the findings of this research.

The day started with some of the Library’s more historic items. The Library’s founder collectors, especially King George III, Sir Hans Sloane and Thomas Grenville, had a strong interest in North America and, as a result, collected significant works relating to the indigenous peoples of Canada, the Caribbean and the United States. A significant part of the Library’s eighteenth-century collections are various materials relating to the ‘Four Indian Kings’ a visiting delegation from the nations of the Mohawk and the Mahican during the reign of Queen Anne. Etow Oh Koam, Sa Ga Yeath Qua Pieth Tow, Ho Nee Yeath Taw No Row and Tee Yee Ho Ga Row journeyed to England and London to make their case for greater support and interest from the monarch and their words were variously recorded and distributed. There were also illustrations made of the delegation, some crude and westernised while others, such as those found in the collection of Hans Sloane and reproduced here, are detailed and vivid. The display also highlighted the breadth of Library collections that speak to the history of contact between indigenous nations, North American colonists and Europeans, with material spread across the Library’s manuscript, map, newspaper, printed book and other collections. 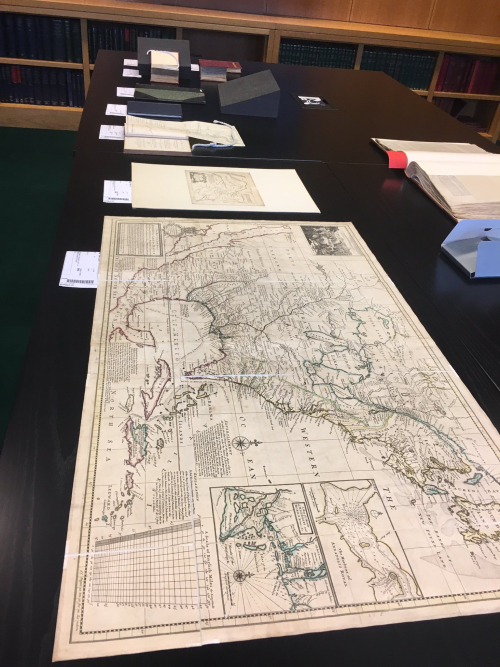 Above: the display taking shape. Image by Cara Rodway.

These collections, specifically those relating to indigenous travellers to Britain across the centuries, are being used by the Beyond the Spectacle project, on which the Eccles Centre and other British Library colleagues are partners. In the second half of the day researchers from the project, Jack Davy and Kate Rennard, worked with Roberta Wedge, who frequently runs Wikipedia editathon days with the Library, to illustrate how collections such as those at the Library can be used for research and to improve the information found on public websites and encyclopaedias, such as Wikipedia. It is not unfair to say that some of the students started this part of the day dubious as to how they could use their learning and recent research to update something like Wikipedia but the day provided openings to a different perspective. Roberta’s work with Wikipedia and organising group edits of Wikipedia pages focusses on how the site can only reach its full potential if a wide range of individuals, publics and perspectives are contributing to the editing process. If this can be achieved, the content of Wikipedia and other online forums will reflect the diversity of the world in which we live and its complex history. 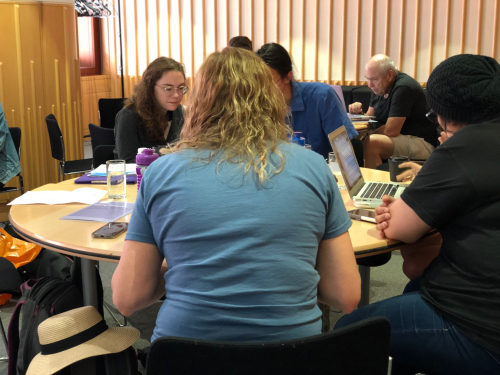 Above: students from the group researching and editing. Image by Phil Hatfield.

Part of the afternoon focussed on encouraging students to conduct their own research, based on the display from earlier in the day and using online archives and resources to dig into some of the other materials the Beyond the Spectacle project has been using. We are grateful to the British Newspaper Archive and Adam Matthew (creator of the American Indian Newspapers database) who both provided access to students on the day so they could engage with the materials held in their collections and use them in research and editing. Students used these materials to update entries on a number of Wikipedia pages, adding information to the page, ‘Four Mohawk Kings’, the page for St. Olave’s Church (London), setting up a new page on the playwright and actor Gowongo Mohawk and making a number of other edits.

By the end of the day many of the students were motivated by the realisation of how much agency they have to develop content on sites like Wikipedia and excited by the new research skills they had learnt by using the resources of the British Newspaper Archive and Adam Matthew. For me a favourite moment was when a student, asked how the day had influenced their perspective on Wikipedia noted that now, ‘Wikipedia is my new stomping ground’. The day showed the potential of supporting students and other researchers in gaining access to historic and digitised collections, it also highlighted how the knowledge gained from these can contribute to influential public sites. We hope to run similar events again, on a wide range of subjects, and thank Adam Matthew, the British Newspaper Archive, Wikipedia, Beyond the Spectacle and UBC for their support and partnership.